Trekking in Shangarh – Passing through Uneven Paths of Sainj Valley

From Aut to Sainj, I traversed through valleys, gorges, mountains, and among the most scenic views of nature, Himachal Pradesh has been bestowed upon. Sainj Valley has nestled Shangarh in a way like a mother does to her child. The driver kept talking on the way while I was just lost in the views of the valley. I just responded with a smile, hmmm, yes, etc. Though we had a good conversation but I was just wanted to stay calm and get lost in the tranquil environment of Sainj Valley. I was all set to trekking in Shangarh. I had already made my mind in the cab itself that I would be trekking in Shangarh once I reach there.

I love trekking. Though I haven’t trekked much but I do love it. I missed the Kheerganga trek since I was traveling with friends and one of them refused to trek. And that was the reason we had to cancel Kheerganga Trek. It was some three years back and I haven’t been able to go there back. Though I did a trek in Tosh a bit, walked down from Tosh to Barshaini just to satisfy myself. 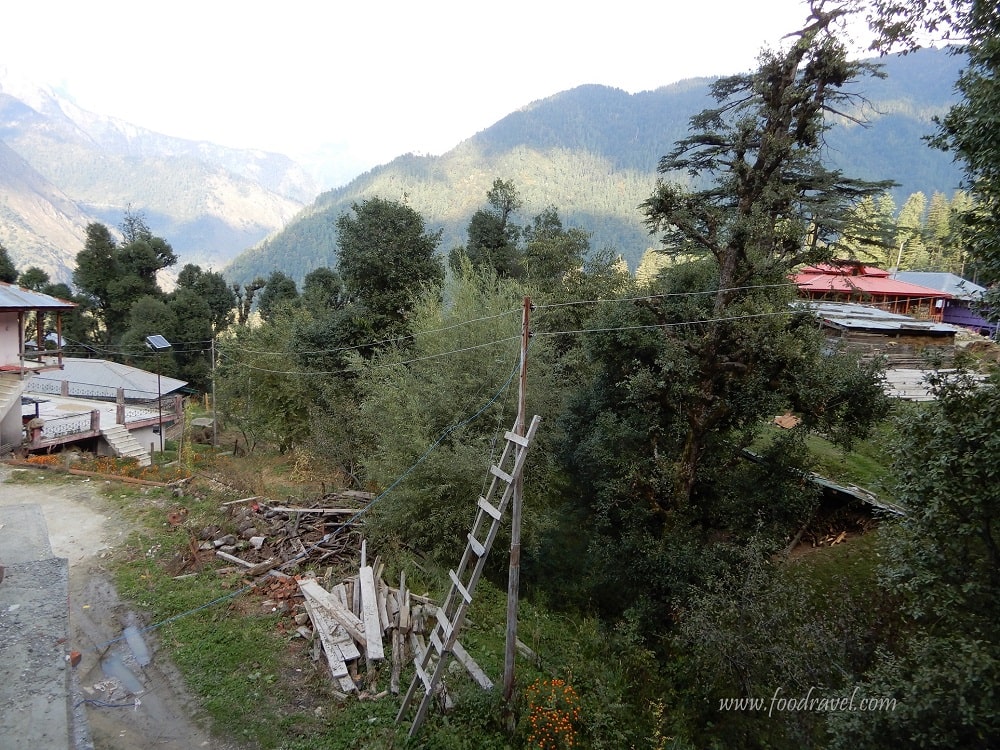 That is why I love to travel alone. You do what you like, no worry at all! Or travel with likeminded people. I have traveled with friends after that trip but haven’t enjoyed it since every time there was some issue and the mood was spoiled due to useless things.

From Devata Ground to Homestay – Trekking in Shangarh

I reached Shangarh around 10:30 in the morning. When I held my head high and looked around, I could feel the chill in the air, peace everywhere, pine trees, blue sky, green lush terrains, very fewer people, chalet-like houses, both wooden and concrete. At the dropping point, I saw two boards of homestays. Shangarh has two or three homestays (maybe more now). I called one and asked if the room was available or not. Well, I didn’t get the room there. This happens a lot of time since I travel unplanned without any prior bookings. But you should. 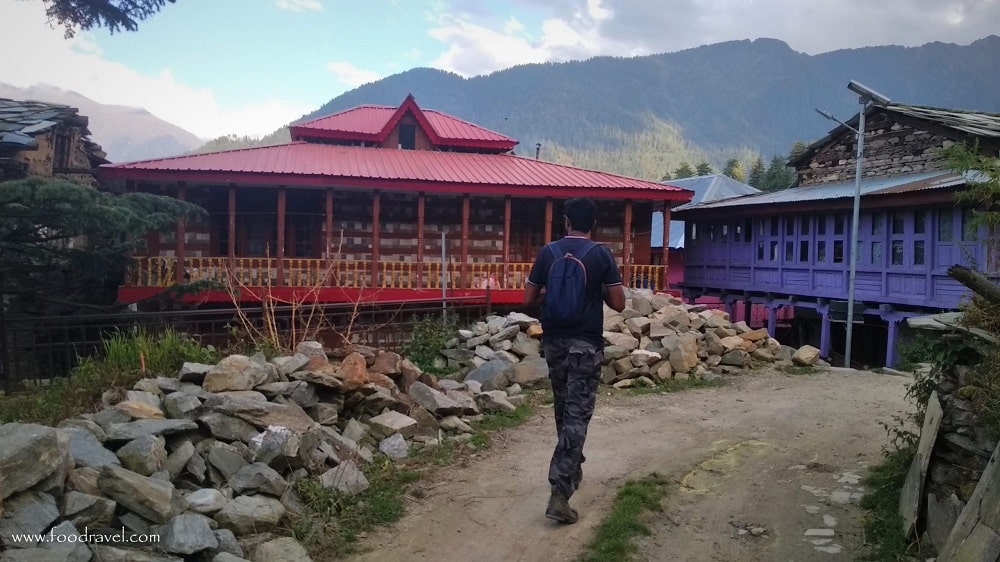 I called one more homestay, asked for a room and yes, I got. But I had no idea where the homestay was located. The homestay owner gave me some directions and I just pretended that I knew the way which I didn’t at all. While I started trekking in Shangarh, the memories of Triund trekking got refreshed. The uneven stony path, surrounded by green lush terrains, trees, birds, silent ambiance, this was such a soul-soothing experience.

While I started walking towards my destination, I saw this place. Okay! So, I didn’t know if the place existed there. Neither had I read about it on Google. Devata Ground, a huge, massive green, groovy ground, like water waves have frozen and turned green. Covered with grass to every inch, this small ground under open sky looked like the ground of Khajjiar, just that it didn’t have a lake. After roaming around and taking snaps here, I continued my trekking in Shangarh to the homestay. But I had forgotten the route the owner told me. 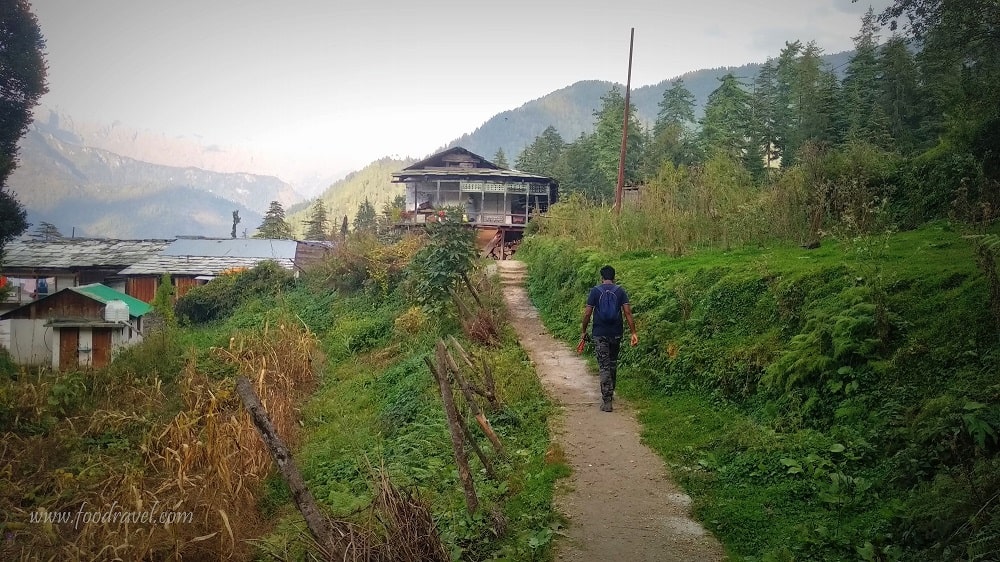 It was really a pain to find the location. Google map didn’t show the homestay, thus, it was a struggle. One I was tired from the longer than the overnight journey, the second I was hungry, and third, I was lost in those ascends and descends. I had no idea where I was going. I just kept moving forward, continued Trekking in Shangarh to whichever direction I found. One way, I asked many people. I saw a group of young girls passing by. I stopped them, made the homestay owner talk to one of the girls, and asked for the path.

So sweet of that girl that she walked with me to some distance to make me reach on the right track. And she smiled and returned back to her group waiting for her. The smile she gave was so energetic that it gave me the confidence to keep moving forward.  I had no idea where I was head, but I continued the path I was told. This is why I love traveling… roam freely without worry!

Snow Line Home Stay; that was the name of the homestay I was going to stay for two days. Well, I continued trekking to the homestay in Shangarh and the trek seemed longer than I expected. It didn’t end and my inner sense started to shout that I was going on the worth direction again. However, when I reached a place where I could see some human settles, homes, cattle, etc. I again called the homestay owner and told him that someone had to come to take me from there. And he agreed to come to pick me up. He came down in his car and took me to the homestay. 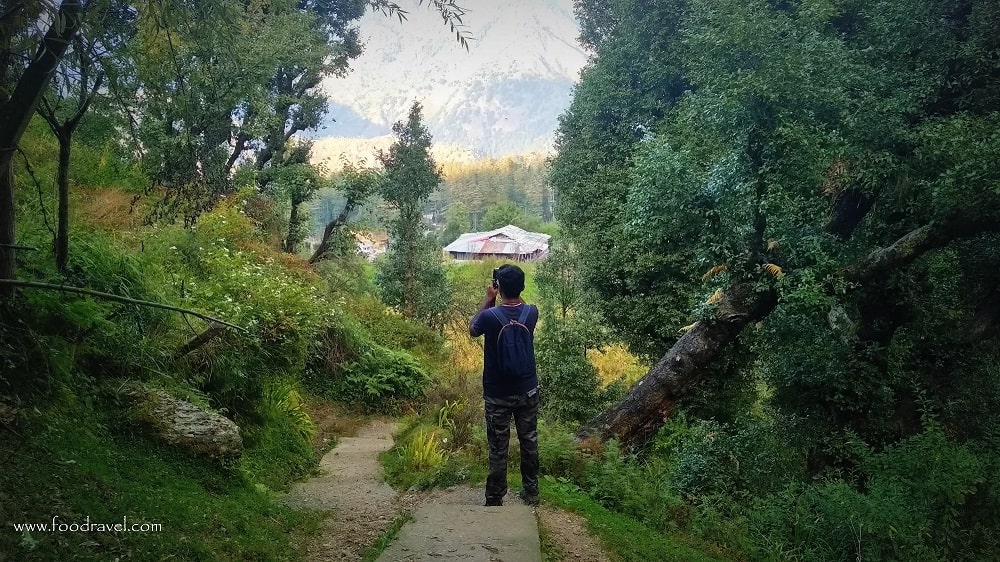 I stayed there for some time, took shower, and got ready for my next phase of trekking in Shangarh. I was also feeling hungry so I needed a café or a restaurant. There was only one small café type place at the place where the cab dropped me. And that was not open in the evening. I went to the main village and asked if there was a place to eat. I went to a small departmental store and asked the same to the owner who told me about a café out of the village someone kilometer away. And yes, I remembered. I saw one café while coming here in the cab.

One my way to Shangarh village, I came to this small café. Maggi in the misty mountains tastes far better than any other place. Believe me this one I had there, really was amazing. The café was humble enough to talk to me and asked me to rate him. The happiness on his face was incredible. Places like this are still away from heavy commercialization and are attached to their root customs and traditions which make this place beautiful. My tendency usually remains to explore such places which aren't touristy but perfect for someone who needs an escape from the routine life. A break and runaway to places like this is refreshing and you feel rejuvenated. I didn't feel like coming back but at the same time I have to see my more plans. . . . . . . . . . . . @wandering_himalayans @travel_in_himachal_pradesh @highlander_network @himalayas.in @the_himalayan @awesomehimachal @himachalgram @himachal.wonderland @himachalisluv @ig__himachal @beautifulhimachal @pahadi_is_here @jannatehimachal @cntravellerindia @natgeotravellerindia @dream_land_himachal @dharamshalagram #food #foodlove #foodlover #instafoodie #instafood #foodstagram #foodphoto #foodphotography #foodporn #foodgram #foodgasm #nomad #foodblog #foodblogger #foodporn #foodaddict #foodilicious #foodwriter #FoodRavel #maggi #himachal #himachalpradesh #foodislove #foodislife

I made my way to Mountain Café located out of the village. Shangarh had no such place where one could sit and enjoy a delicious meal. The only place I went, was this café located away from the village. I came to the village through that path in the cab and retraced the same path trekking to the café. I saw apple trees, birds flying with their wings wide open in the sky, I saw some people working on the way, I saw dogs, the friendly animals who look at you with lots of love in their eyes. They don’t know you but still, they will follow you and will try to talk to you.

When I reached the café, the only thing that I got was Maggi. Well, Maggi is a hit in the mountains. You will find it in every corner of Himachal Pradesh. It had started to get darker and colder. Though I was in my T-shirt only, I had started to feel the coldness in the air. The Maggi I ate was the most delicious Maggi I had in the mountains. The 30 rupees hot bowl of veg Maggi was scrumptious and gave me some warmth. It was so delectable that I had to order for one more bowl and finished that too like I hadn’t had food for a long time. The homestay owner called me to ask if I wanted to have home-cooked food and how could I say no. I have had Maggi by riverside yet love for Maggi in mountains is incredible… 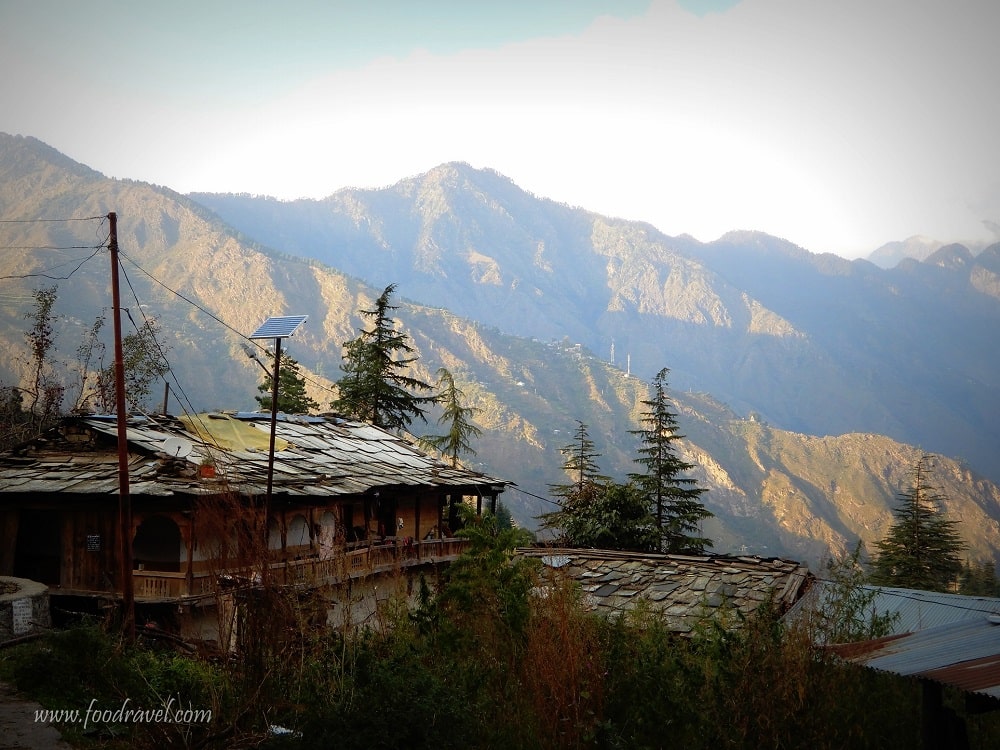 I left the café and continued trekking the spiral paths of Shangarh with lots of ups and downs. With my earplugs on and my travel playlist, I kept on walking the same path I came on. It was getting dark and I observed most of the village was dark like there was very little electricity or light facility. The moon was spreading its milky light everywhere. I had my phone’s flash torch on to navigate through the bushes and trees. The sound of insects and some animals from a distance filled the environment with an eerie feeling with a full moon in the backdrop and no lights around. I tried to retrace the same path yet I missed out and got lost again. 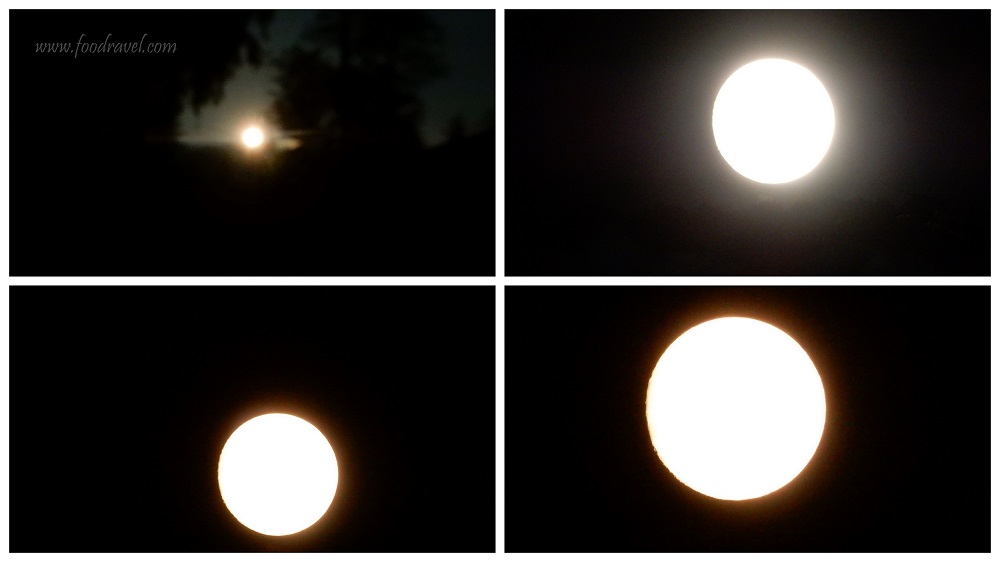 When I reached near a few houses, I searched for one but looked like everyone was already in their blankets. I was cold, damn cold. Fortunately, a lady came out for something and I asked if I was on the right way to Snow Line Homestay. She showed me the path, guided me and I headed on the way she told me. I could hear the waterfall somewhere and the stairway type path which I crossed while coming down from the homestay in the noon. The calm, silent night and I, and I was a little skeptical since it was jungle around. I was heading with my full pace to the place and I saw the homestay. Yeah, after walking for this long and for so much of struggle, I finally reached the homestay. I quickly got into the freezing cold quilt, made it warm, made myself warm, and take a breath of relief.

The wife of the homestay owner came with a plateful of food for dinner.  Lots of chapatis, bhindi (Okra), and dal, a homemade dinner. It was hot and the smell, passing through my nose, hitting my brain, gave me a sense of how delicious and blissful it is to have homemade food even when you are not at your home, the taste is far away from explanations.

Sainj ValleyShangarhTrekkingtrekking in shangarh
Prev post How did I reach Shangarh Village? A Place of Eternal Peace in the Sainj Valley
Next post Where to stay in Shangarh? Snow Line Homestay Shangarh