The History of Pepsi – Cola 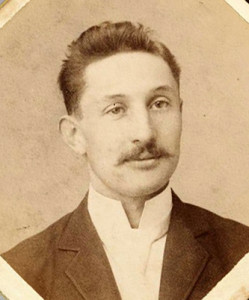 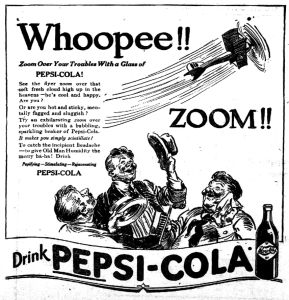 The theme line of Pepsi is “Exhilarating, Invigorating, Aids Digestion

History of Pepsi – A Chronology of Evolution of Pepsi

Read the history of Pepsi which has been written chronologically.

1893: Started by a young pharmacist, Caleb Dradham from New Bern, North Carolina, USA, at his drug store soda fountain. He experimented with different types of concoctions of soft drinks. He named it as “Brad’s Drink”.

1902: The drink became widely popular and Bradham started to focus on this as a full-time business. He got it registered and trademark with US Patent Office, Washington DC. That’s how Pepsi – Cola Company came into existence.

History of Pepsi – 1940s advertisement for Pepsi, one of the very first to be targeted specifically towards African Americans. The young boy pictured is Ron Brown, future United States Secretary of Commerce.
Image Source 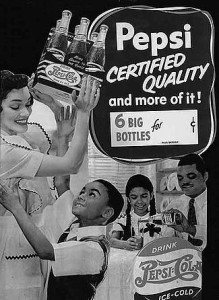 1903: Bradham moved to a rented warehouse from his drug store for production of Pepsi – Cola. In its first year of operation only, he sold 7,968 gallons of beverage.

1904: He purchased “Bishop Factory” in New Bern in $5,000. He moved his bottling and manufacturing unit to this building. Pepsi came in a 6-ounce bottle and the sales increased to 19,848 gallons.

1905: The first franchises for Pepsi – Cola bottling was established at Charlotte and Durham, North Carolina.

1906: In the eight years, Pepsi – Cola got logo changed for the third time. The new logo came with a slogan, “The Original Pure Food Drink.”

Pepsi – Cola owns 15 bottling plants in the US. It registered its trademark in Canada. The sales rose to 38,605 gallons. It was another big event in the history of Pepsi.

The Pure Food and Drug Act was passed by the then Federal government. This banned several chemicals such as uranium, barium, lead, and arsenic from beverages and food. As a result, several soft drink companies such as Coca – Cola changed their formula. But Pepsi – Cola had confirmed that they had no impurity in their drink, claiming to meet out the federal government act requirements.

1908: Pepsi – Cola became the first company who modernized the delivery to the motor vehicles from horse carts.

1909: Barney Oldfield, the automobile race pioneer, endorsed for Pepsi – Cola in a newspaper as “A bully drink… refreshing, innovating, a fine bracer before a race.”

1920: The theme line of Pepsi – Cola spoke to the customer as “Drink Pepsi – Cola, it will satisfy you.”

1923: The company went bankrupt and was sold to the Craven Holding Corporation, North Caroline for $30,000.

1931: The National Pepsi – Cola Company went bankrupt for the second time, declared by District Court of Eastern District Virginia. This was the second time the company had gone bankrupt since its formation.

The Pepsi was acquired by the Loft Candy Company. The president of Loft Candy, Charles G Guth, took the leadership of Pepsi in his hands and reformulated the beverage formula.

1933: The company was insolvent by the end of the year.  Megargel acquired an interest in the company and owned 91% of the company.

1934: A landmark year for the company. The beverage became hit and the sales rose. The company introduced its 12-ounce bottle at a five-cent price, first in Baltimore, where it became an instant hit. Sales skyrocketed throughout the country.

1938: A new president was elected for the Pepsi – Cola Company. Water S Mack, Jr, the VP of Phoenix Securities Corporation. He focused on the advertising part and turned Pepsi – Cola into a modern marketing company.

1939: “Pepsi and Pete” comic strip was introduced in newspaper themed “Twice as much for a nickel.”

Water S Mack became the CEO of Pepsi – Cola. Guth was removed by the Board of Directors from Pepsi Payroll as he planned to acquire the cola personally.

1940: “Nickel, Nickel” was the first ad jingle becoming hit to be broadcast on national radio.

1941: The Pepsi stock was first traded by the NewYork Stock Exchange.

Pepsi changed its color to red, white, and blue in support of the war effort.

1948: The company shifted its headquarters to Midtown Manhattan from Long Island City.

1950: Alfred N Steele was elected as the CEO and President of Pepsi – Cola. His wife, Joan Crawford, who was a Hollywood movie star promoted the product line.

1953: Pepsi – Cola launched a campaign which focused on caloric content reduction in the company’s product line. It was named “The Light Refreshment.”

1960: Pepsi focused on the young generation and advertised its product line as “Now it’s Pepsi, for those who think young.”

1962: Pepsi again modified its logo. It was the sixth time. The new bottle cap ‘serrated’ logo was introduced. It had the company’s groundbreaking “Pepsi Generation” ad campaign.

1963: Donald M Kendall was elected the next CEO of the company.

The company introduced its 16 ounce sized bottles. Pepsi – Cola was the leading company in the market of soft drinks.

The company introduced its 12-ounce cans to the military for worldwide transportation.

Mountain Dew was acquired by Pepsi – Cola from Tip Corporation.

The 12-ounce cans for the military was a huge success.

The first ad campaign of Mountain Due was launched as, “Yahoo Mountain Dew… It’ll tickle your innards.”

1970: Pepsi introduced the first two-liter bottles. It also introduced recyclable, lightweight bottles made up of plastic.

1974: Pepsi opened its first plant in the USSR.

1976: Pepsi became the single soft drink brand to be sold largest in the US supermarkets.

Pepsi introduced a classic ad campaign “Have a Pepsi Day”, it was a commercial hit. Another ad “Puppies” became the best-loved ad in the US.

1977: Pepsi got its next President, John Sculley.

1978: The company experimented with new flavors and launched 12 pack cans.

1980: Pepsi topped the sales to take the home markets.

1981: China and PepsiCo signed an agreement for soft drink manufacturing. It started the next year.

1982: A caffeine-free cola, Pepsi Free was introduced. The company penetrated 76% of the American market. 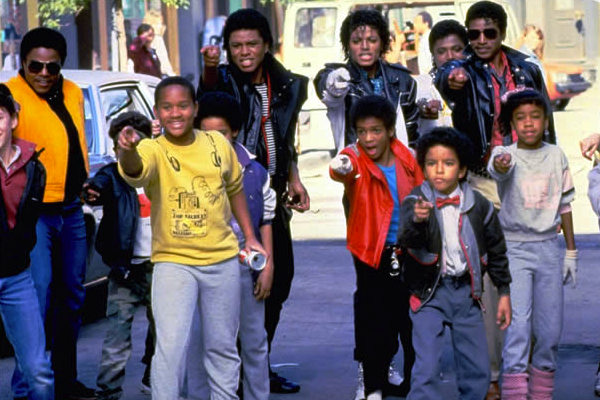 In November 1983, one year after “Thriller” was released, Michael Jackson (with his brothers) and PepsiCo struck a $5 million partnership that would shatter the record for a celebrity endorsement deal, link the two entities for a decade and set the bar for every integrated marketing campaign that would follow.

1984: The cold drink became the Choice of the New Generation.

Diet Pepsi was reformulated with the brand Sweetener, NutraSweet.

1985: Pepsi dominated the market and Coke lost to the company.

The New Generation ad campaign received more than 58 ad and film awards by 1985. As per the consumers’ polls, the ad featuring Lionel Richie was the most remarkable ad campaign.

In Canada, 7 – Up International was acquired. Mug Root Beer was also acquired by Pepsi.

1987: Roger Enrico was elected as the CEO and President of  PepsiCo Worldwide Beverages.

The company’s headquarters shifted from Purchase to Somers, NY.

After a long absence of almost 27 years, Pepsi came back to Broadway, along with a new neon sign in Times Square.

1988: The new CEO/President of the company, Craig Weatherup.

1989: Pepsi entered into the next decade, declared the Pepsi Lovers as “A Generation Ahead.”

Wild Cherry Pepsi was introduced as a new flavor.

1990: Young MC, the Grammy and American Music Award winner wrote and performed for Pepsi on national radio. Later on, Ray Charles also joined to endorse Diet Pepsi with the slogan line, “You Got the Right One Baby.”

1991: Pepsi elected Craig Weatherup as the CEO of Pepsi – Cola North America because the company made Canada a part of operations in North America.

Pepsi – Cola partnered with Lipton Tea. The distribution of Lipton Original and Lipton Brisk products came in hands of Pepsi.

Pepsi launched Crystal Pepsi. It was a clear soda with no caffeine, containing 100% natural flavors with low sodium content and no preservatives. Mountain Dew launched the highly popular slogan “Get Vertical.” It was a very significant step that was taken in the history of Pepsi.

1995: The company launched its “Nothing else is a Pepsi” ad campaign and took top honors at the National Advertising Championship.

1996: Pepsi launched one of the greatest entertaining websites. Pepsi World turned out to be the most searched, landed sites on the internet which marked Pepsi’s online presence.

1997: Pepsi launched a new ad campaign. GeneratioNext was totally targeted at young and the celebration of a creative spirit.  This ad was for those who are young and challenge the norm at every step with their new innovative ideas.

Pepsi Co. announced that from Oct 16th, it would spin off its restaurant division, becoming the Tricon Global Restaurants, Inc. It would include Taco Bell, Pizza Hut, and KFC. It would be the largest company in restaurants and the second largest in terms of sales. This was all about the history of Pepsi until the article was written. Keep in touch for more. Apart from the history of Pepsi, we have got some more interesting facts and stories, which you can read in the links given at the bottle of this post.

Pepsi celebrated its 100th anniversary in 1998

Read Out More about Pepsi in our following articles: