So, are you on regular Pepsi consumption? Do you think it can lead to problems? Are you concerned about the Nutritional Content of Pepsi?

Pepsi is one of the most widely consumed carbonated beverages, containing sugar. And so, it also contains calories. Do you know what is the nutritional content of Pepsi?

Let’s have a look over the nutritional content of Pepsi

Diet Pepsi was introduced in 1964. It was an alternative to Pepsi – Cola. This cold drink contained no calories and no sugar. It was made of artificial sweeteners, which gave the same essence and taste as of Pepsi – Cola. 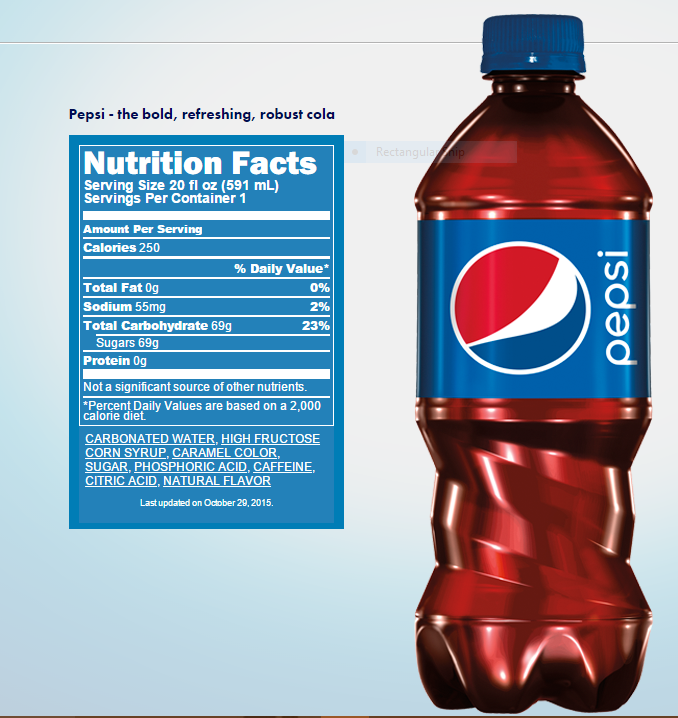 This is an artificial sweetener. It is around 200 times sweeter than sugar. This is primarily used in Diet Pepsi in place of sugar. This lowers the calories in the beverage. Its amount is 118mg per 8 ounces serving of Diet Coke. There are rumors that aspartame causes cancer and other serious health problems.

Expert agencies in the United States and elsewhere that have evaluated aspartame have found it safe for use.

The Food and Drug Administration (FDA) regulates the use of aspartame and other artificial sweeteners in the United States. In 2007, the FDA stated:

Considering results from a large number of studies on aspartame’s safety, including five previously conducted negative chronic carcinogenicity studies, a recently reported large epidemiology study with negative associations between the use of aspartame and the occurrence of tumors, and negative findings from a series of three transgenic mouse assays, FDA finds no reason to alter its previous conclusion that aspartame is safe as a general-purpose sweetener in food.

The European Food Safety Authority (EFSA) assesses the safety of sweeteners such as aspartame in the European Union. According to a 2009 report from its Panel on Food Additives and Nutrient Sources Added to Food:

Overall, the Panel concluded, on the basis of all the evidence currently available… that there is no indication of any genotoxic or carcinogenic potential of aspartame and that there is no reason to revise the previously established ADI for aspartame of 40 mg/kg [body weight].

Though research into a possible link between aspartame and cancer continues, these agencies agree that studies done so far have not found such a link.

Pepsi has announced that sooner they will replace aspartame with sucralose.

An 8 – ounce can of Diet Pepsi contains 24 mg of caffeine. This is present in kola nuts naturally. This is also present in tea leaves, coffee beans cacao beans.

Diet Pepsi includes many minerals such as sodium, phosphorus, and potassium.

There is no other mineral found an insignificant amount. Potassium and sodium are electrolytes that maintain body fluids while phosphorus preserves the beverage’s freshness.

Stay tuned in for more informative articles on Pepsi.