From Train to Bus – Heading to Nepal

So, from the railway station, the train moved after with 10 minutes. I was told that we were not going in reversed compartment. I was little surprised that such a long journey that too without any reservation. Now the train started to move slowly. There was no space to get inside the train. I along with many others managed to put one foot over the footboard while my rest of the body was hanging out side. I anyhow caught the handle at the door and made myself stick to it. Same others did. That day, I saw the mutualism as well as democracy. People were helping each other to get into the train. I have been a regular train commuter, as I used to commute from my home to Gurgaon during first semester of college but always noticed that people wanted to rush inside pulling others outside. But here, everyone was only concentrated to get some place to go inside. Though the train was packed to its capacity, people were sitting on berths, luggage places, even at the door inside. I am many others were hanging outside the train. The train caught up speed. We were hit by many bushes and trees as we were hanging outside. We were even scared what if we fell down? The journey would have turned into mourning.

But after sometime, a train caterer came and he helped us to get inside. He did great efforts to pull and push and made space for everyone. He told it was his regular duty because sometimes people fell down. He then anyhow managed to get seat for everyone, no matter where. He also gave me a seat on the berth. Though the space was very little and the journey was long, but I got some relief. He went to his schedule. We all friends were away from each other. I was just worried and my eyes were searching everyone in the crowd. I found one. Brother Basil, the team leader. The train was Darbhanga Express. We had to get down at Gorakhpur from where we had to go the border in bus. We anyhow managed to fix – squeeze ourselves to get little space around. I was sitting on the berth but the space was too small for a six feet tall body. There were already four on the berth. At the time, the night man came with food packets and started to give everyone. People denied but he didn’t. He also offered me and I opposed that we had food in our bags, but he said that he had got me a seat so I had to buy one for 70INR. Then I realized why he showed such humanity at that time and took so much pain in helping and getting us seat. After long talks, I finally had to buy a packet. I tell you the food was tasteless. I couldn’t eat and had to throw.

Anyways, the train started at 2:10Pm and we reached Gorakhpur at around 5AM in the morning. We got down there. From there we had to go to the border. We got into a bus at around 6AM and reached the border within some three hours. The Indo – Nepal border, Sonauli is some 90 kms from Gorakhpur.  The place is famous transit point between both the countries. We were tired because of that train. It was packed like animals. And the worst thing was the suffocation. People sitting around me were chewing betel and tobacco. It was really pathetic and I don’t have any plan to explain it in Nepal Diary.When we got out of the train, we felt so much relaxed and relieved that we just wanted to sit and stretch our body. The bus was again packed full. But we got good seat. I sat in the cockpit near the bus driver with Dinesh. We saw beauty of the green and yellow fields, trees. It was all beautiful, sometimes clear sometimes thick fog. After a journey of around three hours, we reached the border Sonauli. 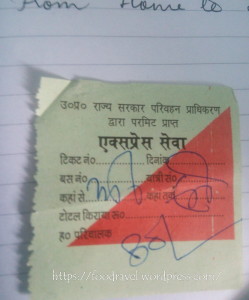 Come with me to the country, across the borders…