Nepal Diary is a whole lot story of unplanned events. Some events were so amazing and we experienced the things which were never planned that some moments, things would turn out this way. So what happened and what was this from unplanned to never planned events? Here I have described the things at best of my memories. Though not completely, still I try to remember every little detail and will sketch out the description.

Here it goes from Unplanned to the Never Planned!

I was all alone sitting in my room. The clock showed 9 in the morning. I was still in the bed, as it was really cold outside and wanted to sleep more due to tiring work of previous night. Soon, a friend Dinesh called me up on my phone. He asked me to recharge his mobile phone as he was going somewhere. I said okay and went out to the shop to recharge his mobile phone. I thought he must be not a condition to recharge himself. Within half an hour, I again received his call and asked me to do the recharge again, but this time not in his phone, instead in someone else’s phone. I don’t remember his name exactly. I asked what the matter. He then told me that they were going to Nepal and once they get into the train, they wouldn’t be able to recharge their mobile phones.  By then, the clock needles were moving towards 10 at their casual speed. I asked why I was not informed, Ii would have come. I was told that it was all preplanned and didn’t know why I was not included in the plan. Anyways, I disconnected the call and stepped out to recharge shop. I paid the shopkeeper for the recharge. I returned back and reached to my room. I had no intention of going with them just a little thought that why was I not informed? Their preplanning was unplanned for me. I entered the washroom and washed my all clothes. I put the clothes out on the rope. I went into the kitchen with silent mood and started to knead the dough. By that time with no effort, the clock needles had reached 11:45. I knead the dough and then started to chop the vegetables to cook the breakfast. I am not used to bread and butter. All of sudden it came in my mind that I should go. I hurriedly packed my wet dripping clothes into a poly bag and packed them in my travelling bag. I opened the shelf and checked my wallet. Only 700INR! Not possible to go. I called up my mom and executed the unplanned project. She agreed. Thanks to the Information Technology, she said she would transfer to my bank account. I hadn’t taken the bath yet. I was in casual sleeping trousers and same upper t – shirt. I called Dinesh and asked the time. I was told that the train would leave at 2PM from Old Delhi Railway Station.

I looked at the clock on the wall. I could hear the tick tock saying that run, it’s not good to wait or the train would leave. I packed everything with no planning and rushed to the bus stand. I go into an auto – rickshaw for MG Road Metro Station. 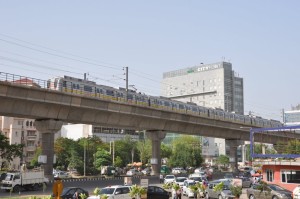 I reached the metro station. My heart was beating faster and faster. I went through security check and thanks again to the technology that I had metrocard which saved my time or I would have to stand in a long line of people for metro token. I reached to the platform for Old Delhi Metro Station. People were staring at me. I was feeling insecure. My clothes were all wet so water was coming out of my bag in small droplets. Dough was still in my fingers. People noticed me with very rare, strange sight. I barely got to see such observations. Anyways, I was just worried about the train. People waiting for me at the railway station, called me to ask where have I reached and even asked to reach as soon as possible, though it was all dependent on metro. And then the thing happened which I was thinking of. The metro got stopped near Qutub Minar metro station. It usually stops for some seconds before Qutub Minar metro station. But this time it took much time as compared to its usual schedule. I was scared. Then there was an announcement that the train has been stopped due to some technical problems. This added more to my anxiety. I saw the time. Still I had some thirty minutes left. After some time, the train moved and at every metro station, I used to look and count how many metro stations were left. So finally I reached the first destination at 1:50PM. I went out of the Old Delhi Metro Station and asked the people about the railway station. Time was less. I was told that it was just behind the metro station. I called Dinesh and told him that I had reached. He asked to come at the platform where they were waiting in train (I don’t remember the platform number). I reached the station. I searched for the train. By the time it was 2PM already.  Then there was an announcement that the train was late by 10 minutes. I took a breath of relief. I met the group there and was told the plan. We were going to Kathmandu through the New Delhi church for a Bible Seminar (I was a member of church that time).

Do you know what happened next???