The little, sleepy village of Shangarh seemed pretty happy to me when I saw the people who greeted me with a smile. When I reached Shangarh, I realized I had come to quite a different place, away from the chaos and carbon which I usually see while living in Delhi. One good thing that I noticed in Shangarh was that the beauty of this place was pure and innocent. Two things attracted me most when I roamed around in the village. One was the groovy ground that resembled a golf course and the other was an impressive wooden temple that was easily visible from some distance. People of Shangarh pray to their local deity and thus Shangchul Mahadev Temple came into existence. 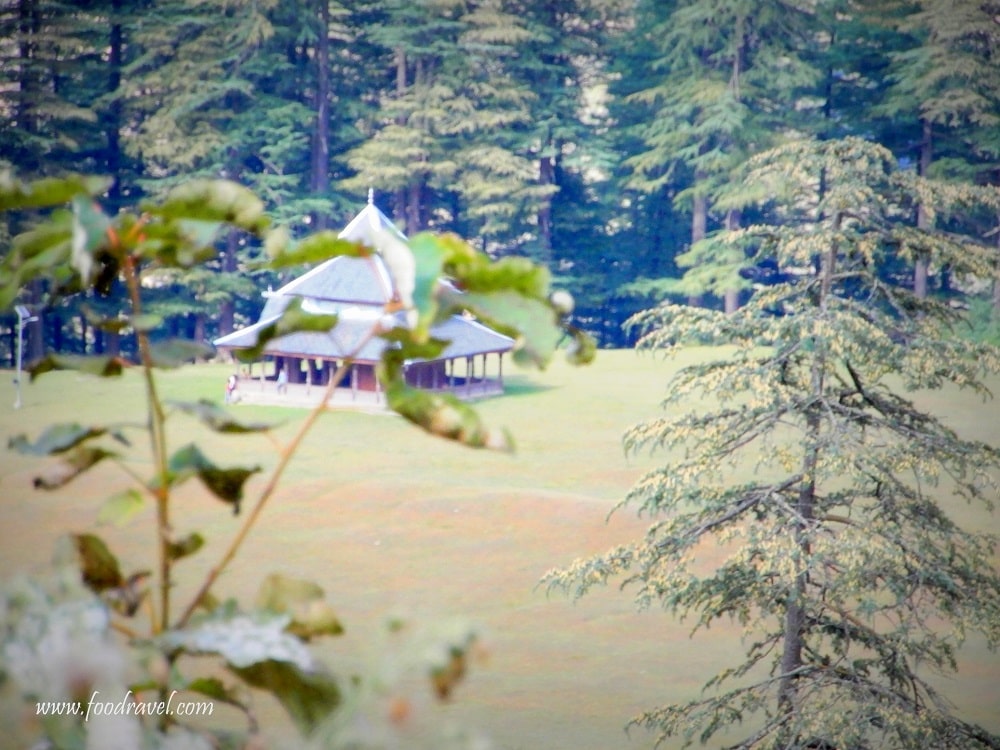 Based at an altitude of around 6300 feet, this temple is an iconic place that you shouldn’t miss out when you visit Shangarh any time of the year. There are myths and folklores behind the existence of this beautiful place dedicated to Shangchul Mahadev. Encircled by pine trees, overlooking the snow-clad Himalayan Mountains, Shangchul Mahadev Temple nestles in the green-lush valley. This temple of Shangarh is now surrounded by village homes.

Shangchul Mahadev Temple is located in Sainj Valley of Kullu Region. The grassland of Shangarh village where the temple of Shangchul Mahadev is located is a part of the Great Himalayan National Park, a UNESCO World Heritage Site. The temple is reached through Devta Ground, green grassland which is said to date back to the Mahabharata Period. 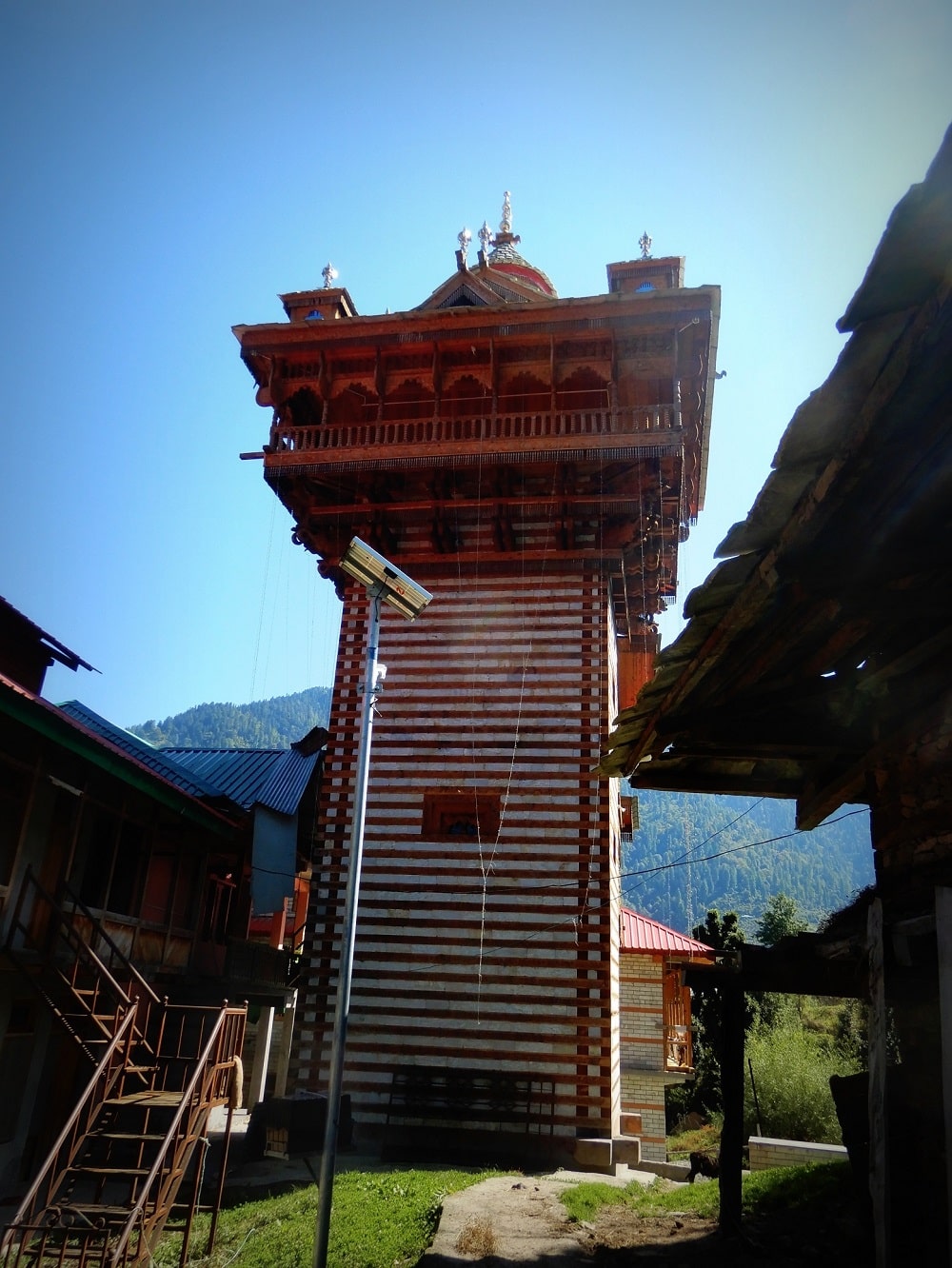 The story of Shangchul Mahadev Temple says that when Pandavas came here during their exile period, they fine sieved this place for rice cultivation and left no stone or pebble behind in the ground; making the ground clean and stone-free. When the Pandavas left the ground, it was occupied by the demons.

It was Shangchul Mahadev who came here from Kinnaur and destroyed all those demons making Shangarh free from the demons. The ground is now named Devta Ground. Shangchul Mahadev later settled in a wooden temple which is now known as Shangchul Mahadev Temple. I had earlier visited Pandavas Cave in Panna and Dhosi Hills in Narnaul which had mythological connections with Pandavas and this was the third place with the same connection. 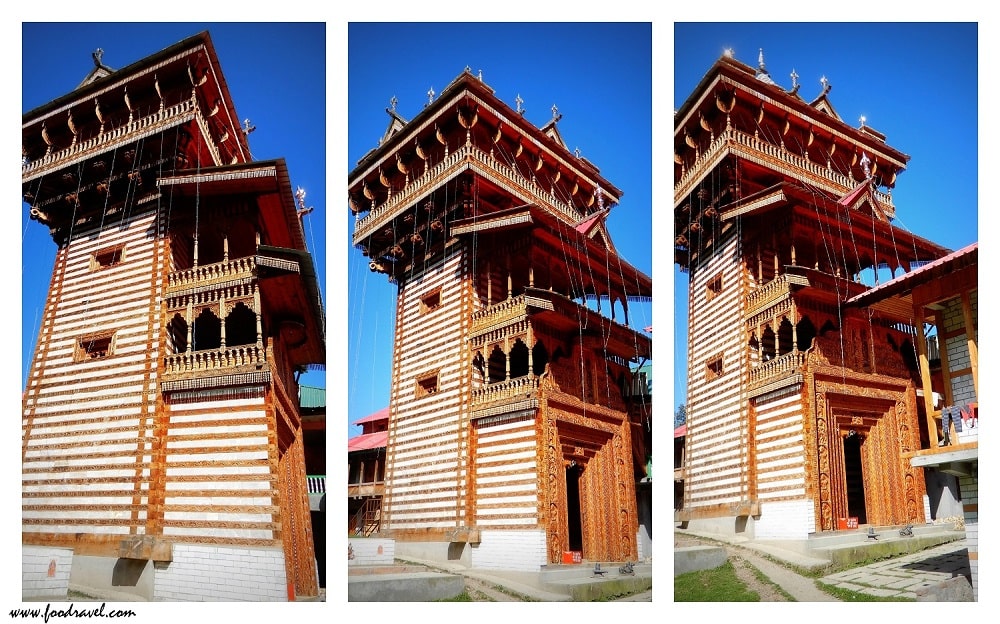 Another folklore says that one day Shangchul Mahadev noticed a cow grazing in the meadows. The scene moved Shangchul and he decided to divide the ground into two divisions. He spared one division of the ground for the cattle whereas he himself settled in one part. The place where he settled is now the famous Shangchul Mahadev Temple of Sainj Valley.

The people of Shangarh village believe that Shangchul Mahadev provides shelter and saves the couples who have been despised by the society who are seeking peace. Shangchul Mahadev showers his blessings on such couples. So, not only for common visitors but this is also a temple for couples.

Shangchul Mahadev remains open all the time and there is no entry fee for this temple. The temple is regularly visited by the local people while people from other villages also have great faith in Shangchul Mahadev and come here to pay respect and prayer.

Located in Kullu Valley which is also known as ‘Valley of Gods’; this temple boasts of impressive woodwork and carvings. Standing tall, this three-tiered temple is now surrounded by the houses but offers breath-taking views of surrounding areas. Locals say that a fire outbreak in 1998 damaged the temple, but the devotees rebuilt the temple at the place of the damaged one. Shangchul Mahadev Temple is a must-visit place in Shangarh and a trip to Shangarh without visiting the temple of Shangchul Mahadev is incomplete.

ShangarhShangarh templeShangchul Mahadev Mandir
Prev post Devta Ground Shangarh – Serenity in the Meadows of Sainj Valley
Next post Why should You Visit Shangarh?