Devta Ground Shangarh – Serenity in the Meadows of Sainj Valley

Shangarh is a remote village which is located in Sainj Valley. Nestling in the serenity of Indian Himalayas Eco Zone (Great Himalayan National Park, a UNESCO World Heritage Site) in Sainj Valley, Shangarh is blessed with nature’s serenity and adorned with green meadows which can make anyone stay and stare for long. Surrounded by hills, deodar trees, and the groovy landscape is located Devta Ground Shangarh which is the first, one will come across after reaching Shangarh. 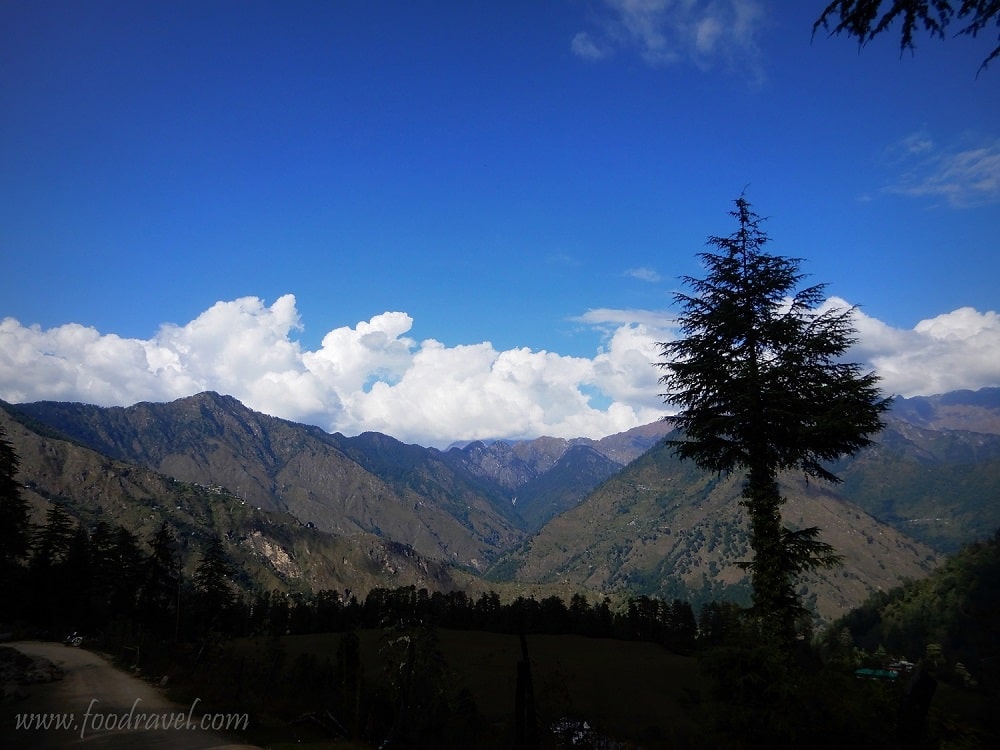 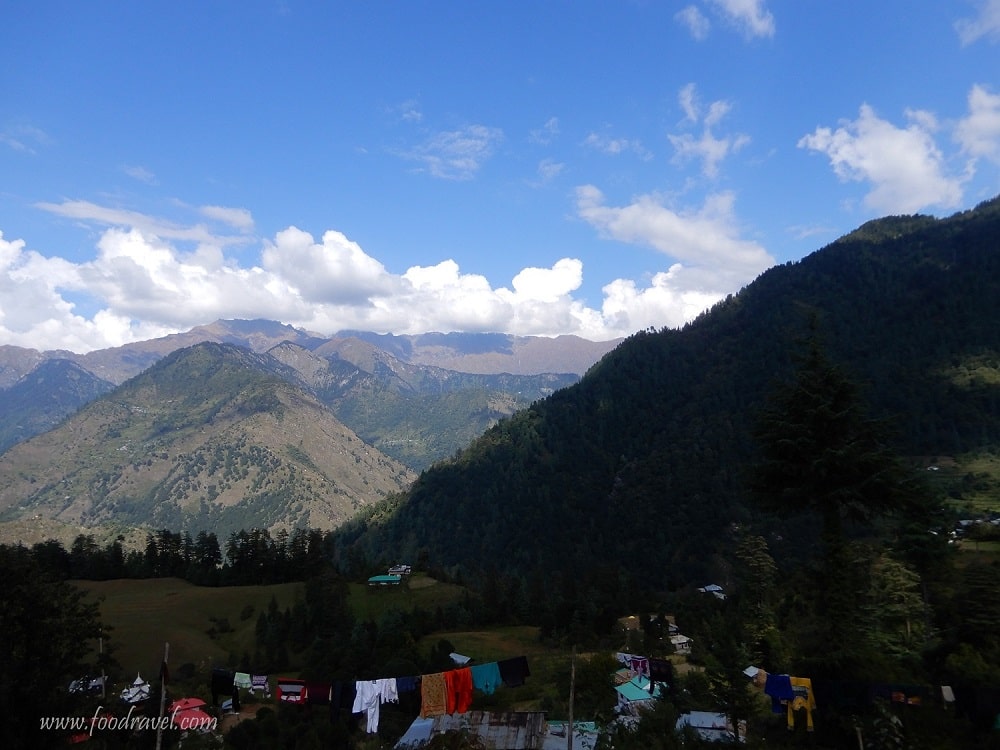 A solo traveler’s paradise, Devta Ground or Devata Ground as the name suggests is the land of devata (deities). People in Himachal Pradesh believe in local deities and have a firm affiliation. In the very first look, the Devta Ground of Shangarh looks like a golf course. The groovy landscape makes it look far more attractive from a distance but the real charm is when you get close to the land and step your feet on this grassland.

Devta Ground Shangarh is said to belong to Mahabharat Times

Shangarh village is famous among bag packers for its massive meadow which is encompassed by a dense forest of pine trees with a mystical backdrop jeweled with Stongi, Banaugi, and Shenshar ranges. If legends are to be believed Devta Ground Shangarh dates back to Mahabharata Times, around 5000 years ago. 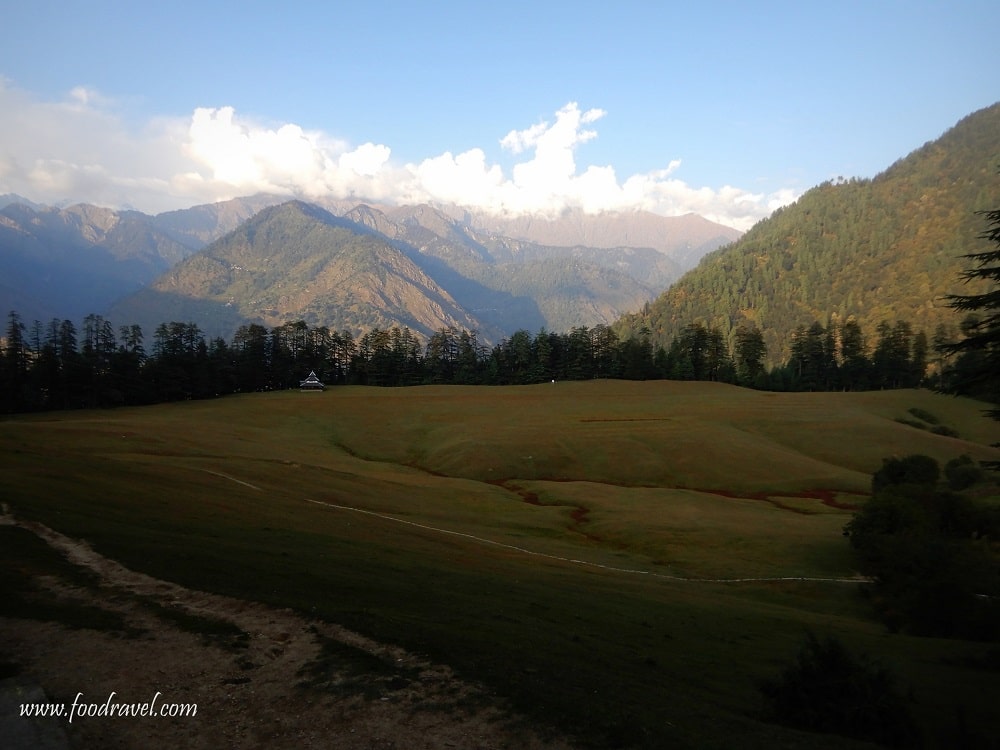 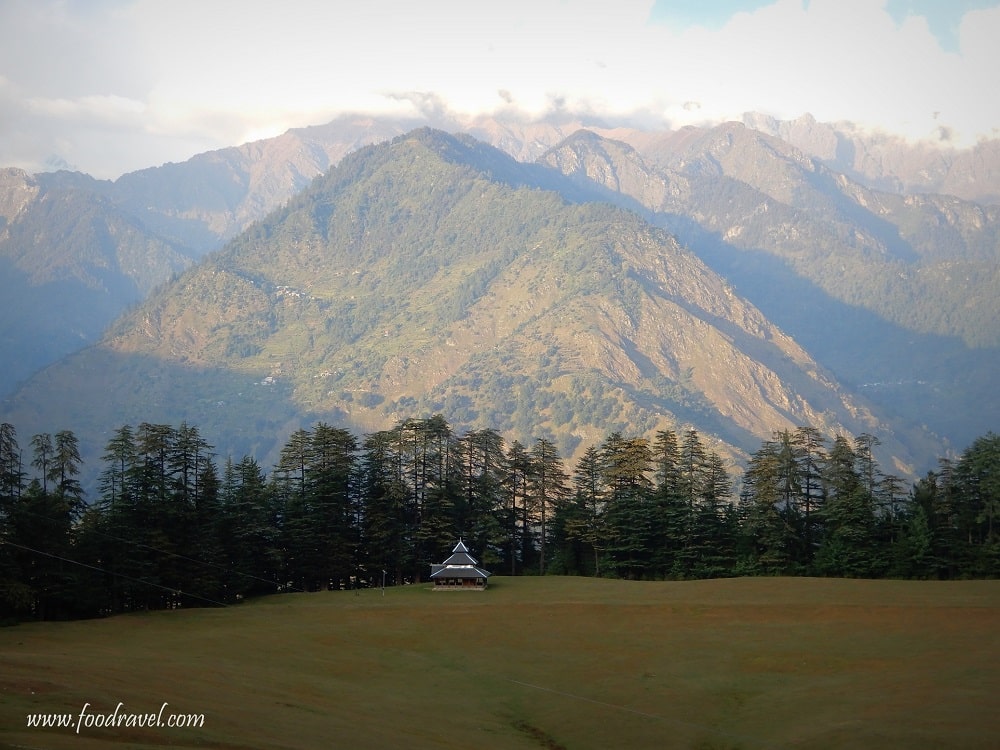 While I was roaming in Devata Ground, I was stopped by an old man who asked me to click him. He asked me to sit with him and he started to tell stories about this ground of Shangarh. I was told that Pandavas visited here during their exile period. They purified Shangarh meadow to cultivate rice, that’s the reason one would not find any stone on the ground, even after digging the land. The Pandavas finely sieved the ground leaving no pebbles on the ground.

When Pandavas left Shangarh meadow, the ground was then occupied by demons. Shangchul Mahadev from Kinnaur destroyed those demons and after that, this place came to be known as Devta Ground. Shangchul Mahadev settled in a wooden temple, encircled by village houses now. After Devta Ground Shangarh, Shangchul Mahadev Temple is the second thing in which you will attract your sight. This was the third place I visited which had a connection with Pandavas, the first one was Dhosi Hills and the second place was Pandvas Falls near Khajuraho. 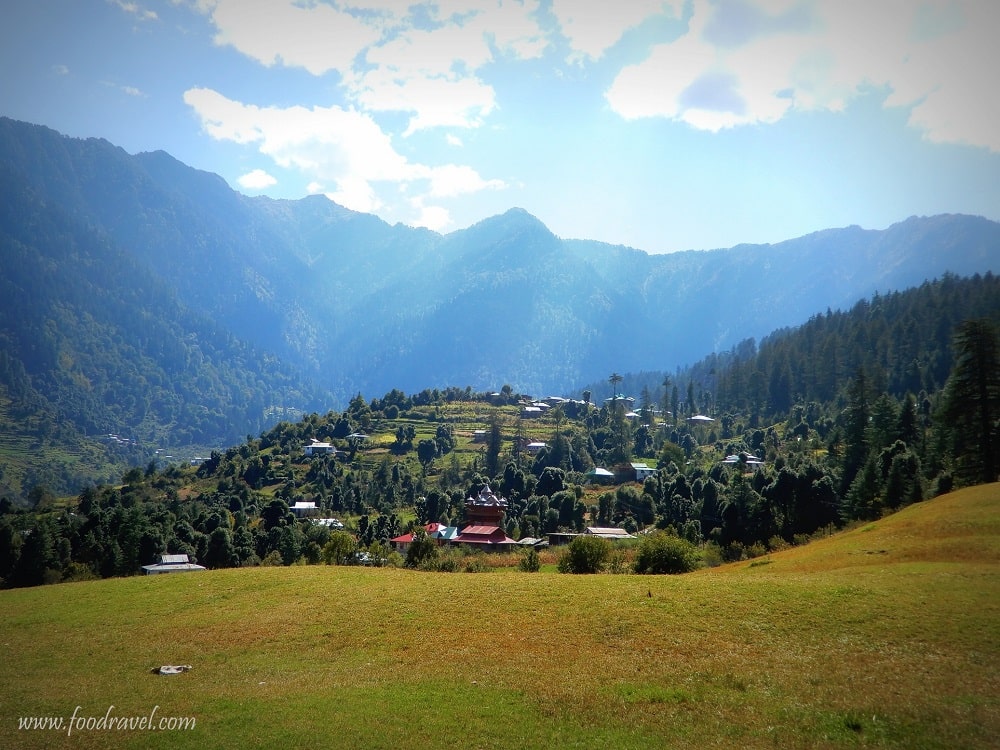 While I was roaming in the ground aimlessly, I saw cattle grazing. This reminded me of another story. It is said once Shangchul Devta saw a cow roaming, grazing in the meadows. This moved the Devta so much that he divided the ground into two separate parts. In one part, he settled himself in the corner while he left the other part for the animals. 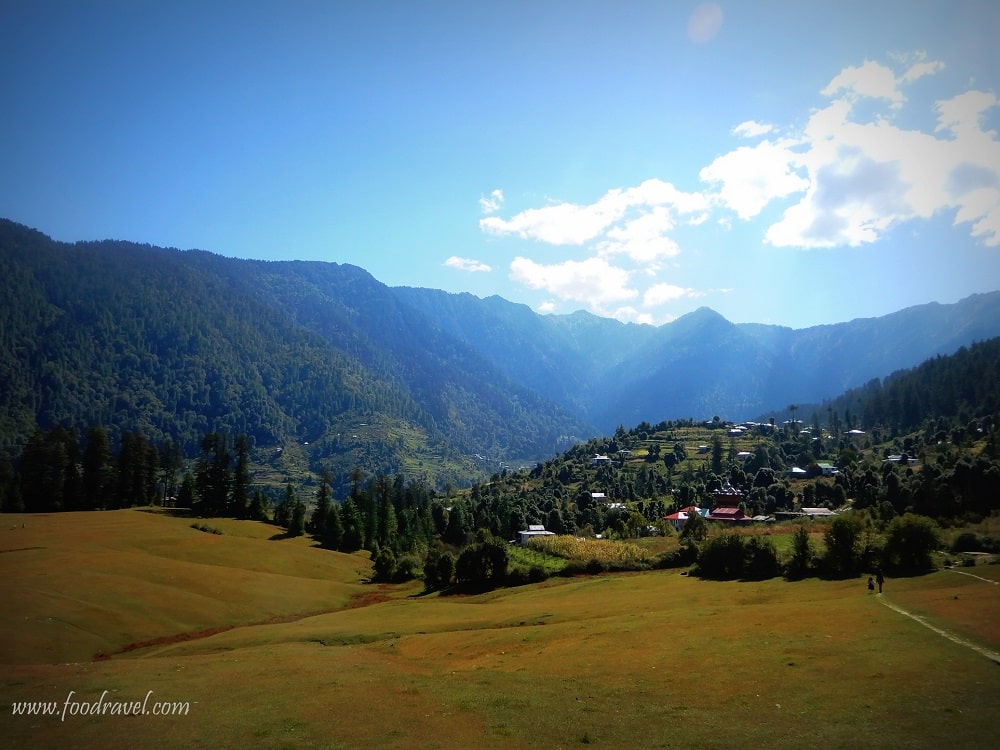 No doubt, Himachal Pradesh is dotted with lots of places where you can go and connect yourself with nature. When I was in Tosh, I felt close to nature and felt peace from within. Tosh became my favorite place while I came to visit Kasol. It is my personal experience, once you reach Devta Ground Shangarh, you will find solace, you will find yourself surrounded by nature and nature’s blessings.

If you love traveling alone, you will surely fall in love with this place in the first glimpse. Devta Ground Shangarh is peaceful; the only sound you will get to hear is the birds singing or the air passing through the pine forest. The enchanting vibes of Devta Ground are magical and mystical with healing aura. All you have to do is to just immerse yourself. This place is perfect to explore if you love traveling. 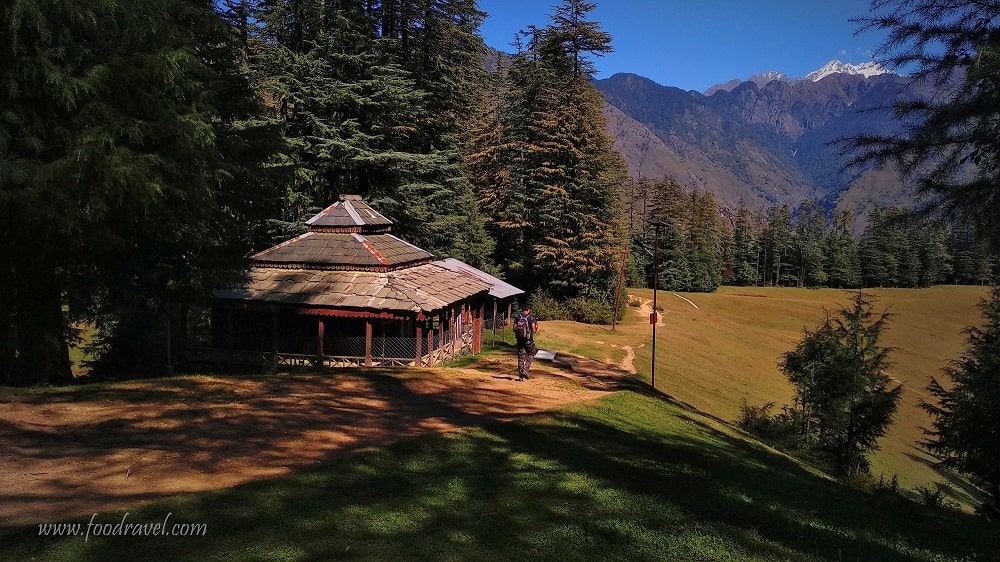 Shangarh is unspoiled by heavy commercial activities. Had there been a lot of such activities, Devta Ground Shangarh would have lost its charm and would have been surrounded by several food stalls, shops, etc. As in my previous blog, I shared about only one café in the village and one café, Mountain View Café, outside the village where I went to have Maggi. Devata Ground is a jewel of nature which is hidden in Sainj Valley away from external threats.

Undoubtedly, Devta Ground is the most beautiful grassland Himachal Pradesh is blessed with. During my two days’ weekend journey to this beautiful village surrounded by hermetical charm, I visited Devta Ground twice, once when I reached Shangarh on my first day and second while I was leaving the village on my second day. This green grassland of Shangarh is a fine example of nature’s miracle at its best. 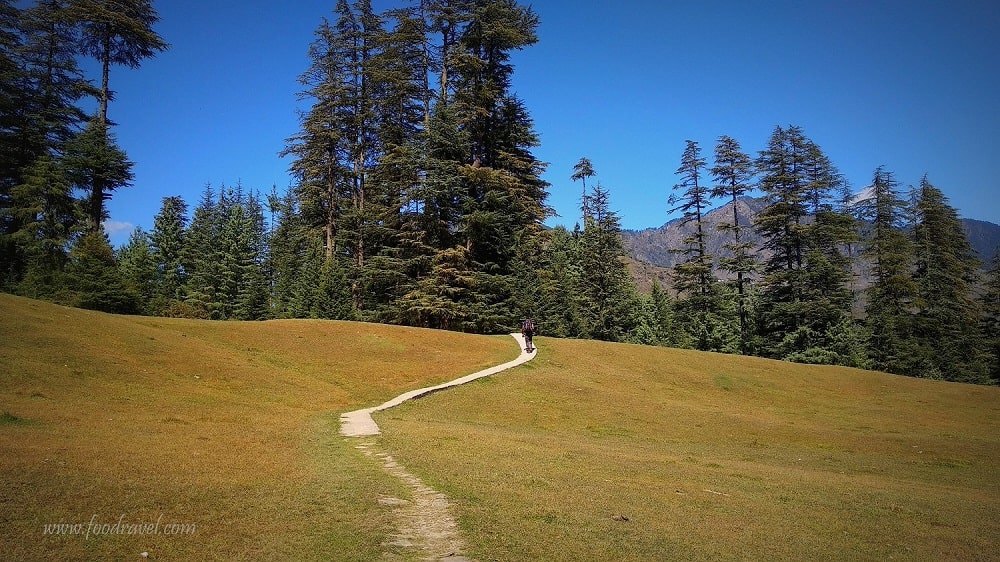 Since it was October and the air was chilly but the breeze was full of nature’s freshness and was rejuvenating me from within. This is one of the most unique places which I happen to experience. Though the meadows of Khajjiar too have mystical charm but the crowd and shops around have made that place noisy. And thankfully, that’s what I didn’t find at Devta Ground Shangarh. The ground has a massive dip in the middle and it looks like that the ground has been perfectly divided into two parts.

A Humble Request – Let’s Save Our Planet

A quaint village, Shangarh enjoys its infancy being free from unwanted carbon and plastic waste. It is imperative to have plastic items while you travel including plastic bottles, food items wrapped in plastics such as biscuits, snacks. Make sure you don’t throw them in this natural place and carry the plastic waste you and dispose of them properly. When I reached Sainj Village from Shangarh, I saw the riverside was heavily clogged with plastic and other waste which was highly disappointing. Let’s come forward to save our nature!