Mcleod Ganj is a nature’s gift to Dharamshala. Also referred to as Upper Dharamshala, this mini Lhasa of India boasts of natural beauty and green nature which is nothing only soothing to the eyes but also captivates one to stay and stare at it for a long time. While I was on my weekend journey to Mcleod Ganj in September this year, I decided to visit the much talked about Bhagsu Nag waterfalls which I had missed in my previous trip to Mcleod Ganj. Trekking to Bhagsu Nag Waterfalls from Mcleod Ganj, I came across a life that was hidden, which I had never experienced before. Though Bhagsu Nag is not that much exotic destination for the pro-travelers but a beginner like me, this place was on my bucket list for a long time. 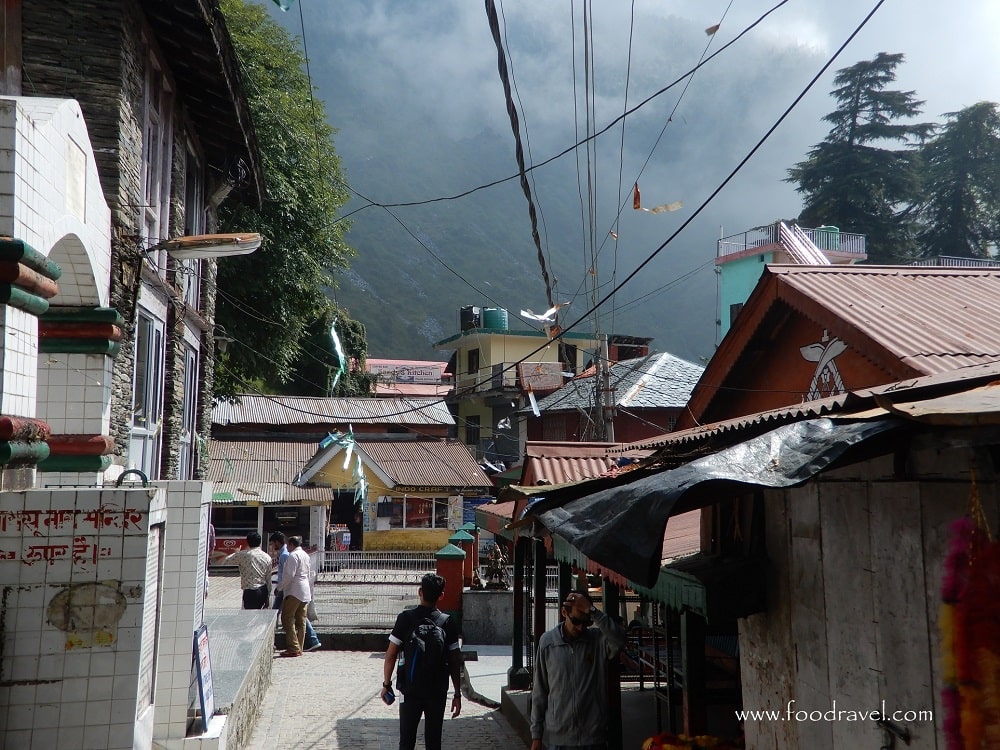 The misty climate, snow-capped mountains, clouds hung in the sky like cotton balls, alpine trees trying to kiss the sky, birds flying freely in the open blue sky, a spiral road and I was walking with my head held high. The feeling of passing through such an ambiance is one of the best moments which I want to live forever. If you have been reading my blogs for a long time, you must have known by now that I often travel to places that are full of nature away from the chaos of traffic and materialism. My tendency remains to find solace or my second choice is historical sites where I travel to explore the hidden stories.

So, last year I traveled solo to Mcleod Ganj and spent two days there since it was my weekend trip (most of my trips are weekend trips only). This time, I was traveling with a friend, Yogesh who is my buddy since college (since 2010). We both decided to make this trip and left. When we reached Mcleod Ganj early in the morning, we booked a room in the hotel for some time to get refreshed and started trekking to Bhagsu Nag falls from Mcleod Ganj itself. 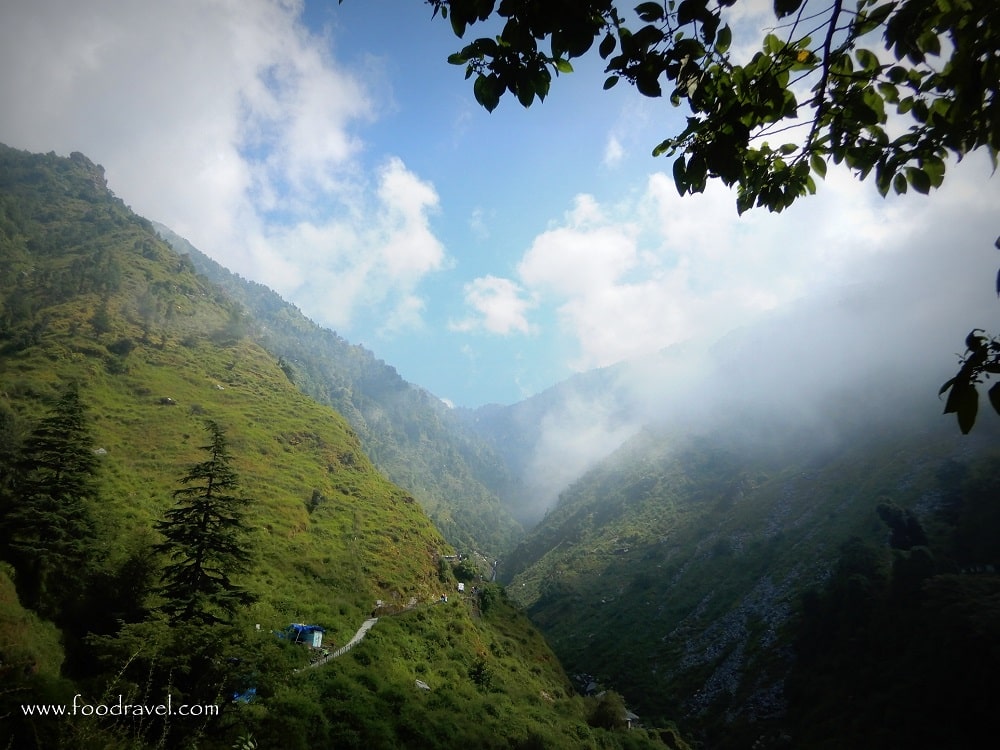 While trekking to Bhagsu Nag, I came across mesmerizing scenery of the holy nature and I was taken away by the view. Many people were trekking to Bhagsu Nag waterfalls, some were seasoned, some were new. I was also coming here for the first time. Last year, when I visited Mcleod Ganj, I took the way towards Dharamkot. From there, I headed to Triund for camping. And that’s how I couldn’t visit Bhagsu Nag. I had decided to visit Bhagsu Nag during this year’s visit to Mcleod Ganj.

It took us more than 1 hour to reach Bhagsu temple from Mcleod Ganj considering that we stopped on the way at several places to photographs. Yogesh was perhaps doing this type of travel for the first time and I doubt if it was comfortable for him or not. He was carrying a portable Bluetooth speaker and we enjoyed the music while trekking.  Passing through several places and turns, asking many people on the way, we somehow managed to reach the temple. We halted at the temple for a while to check it and then made our way to the waterfall. 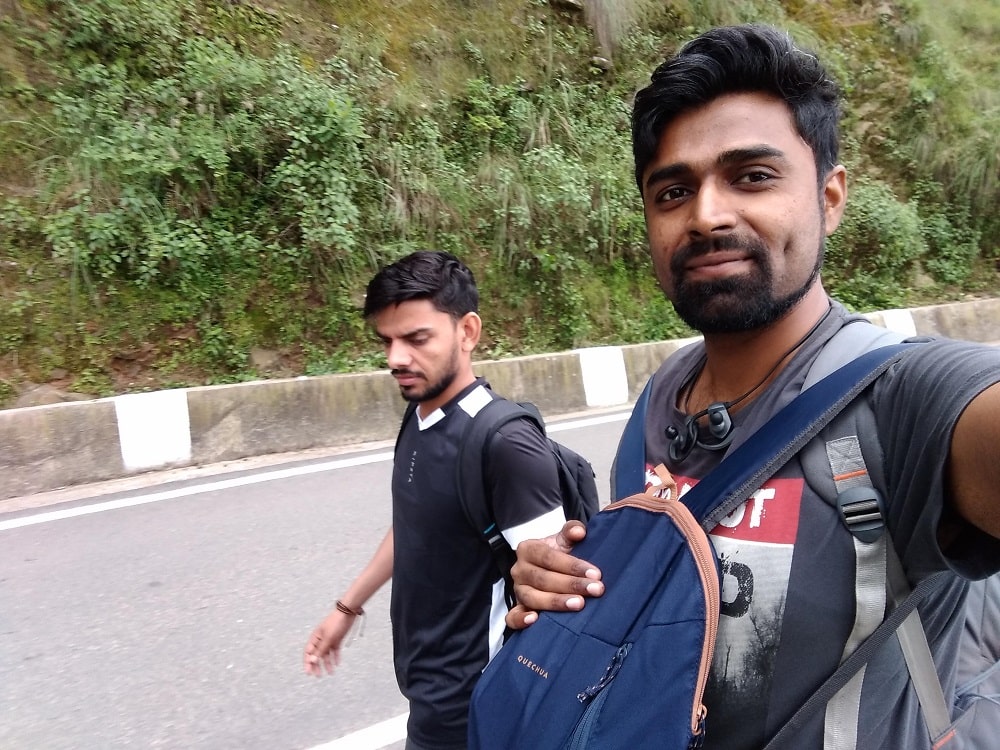 After crossing the temple, I could see the waterfall from a far distance; it looked like a stream of milk being poured from the top of the mountain. It took us another good thirty minutes to reach the top. The trekking to Bhagsu Nag waterfalls wasn’t that much difficult but somehow I started to pant due to which my speed lowered down. I had packed Decathlon’s energy powder and that’s how I recharged myself. 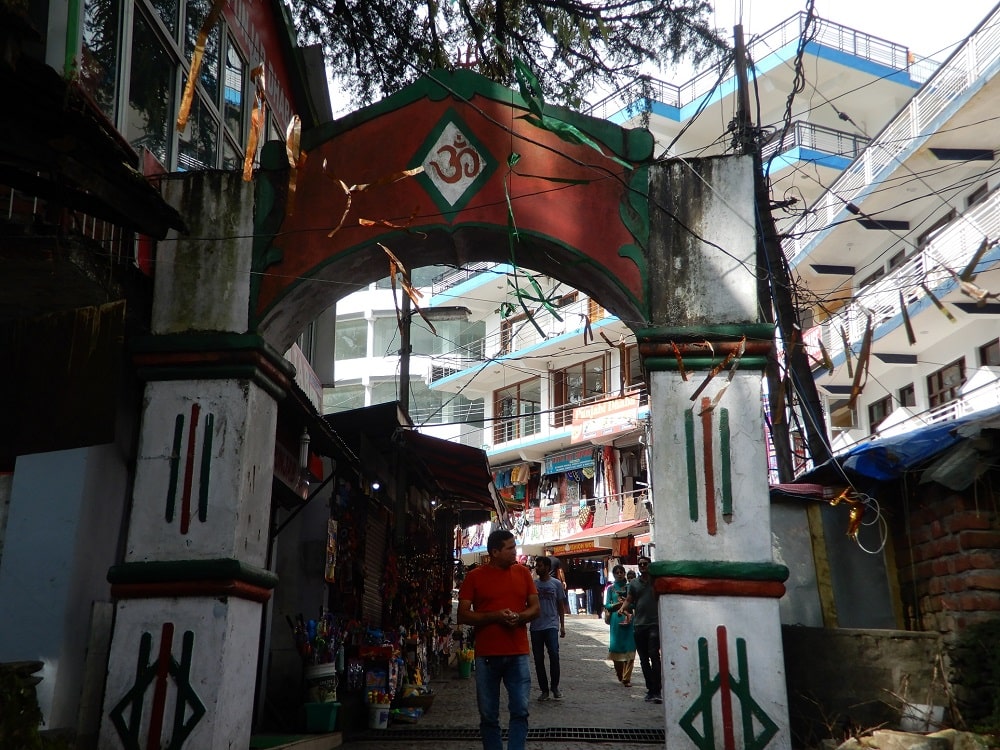 After reaching the top, I realized that it was much crowded. Stuffed with lots of people, couples, and families who came here for a picnic; it wasn’t peaceful at all. Everyone was busy pausing before the camera and hardly there was anyone who wanted to focus on the natural beauty, who wanted to get lost in the serenity of this enchanting waterfall. 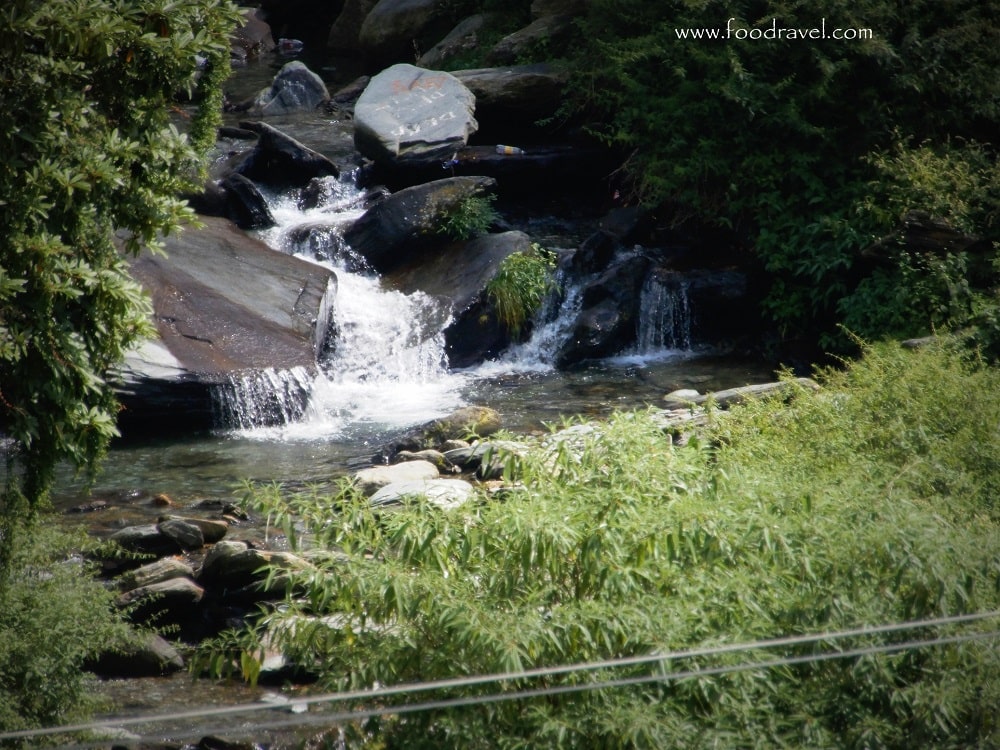 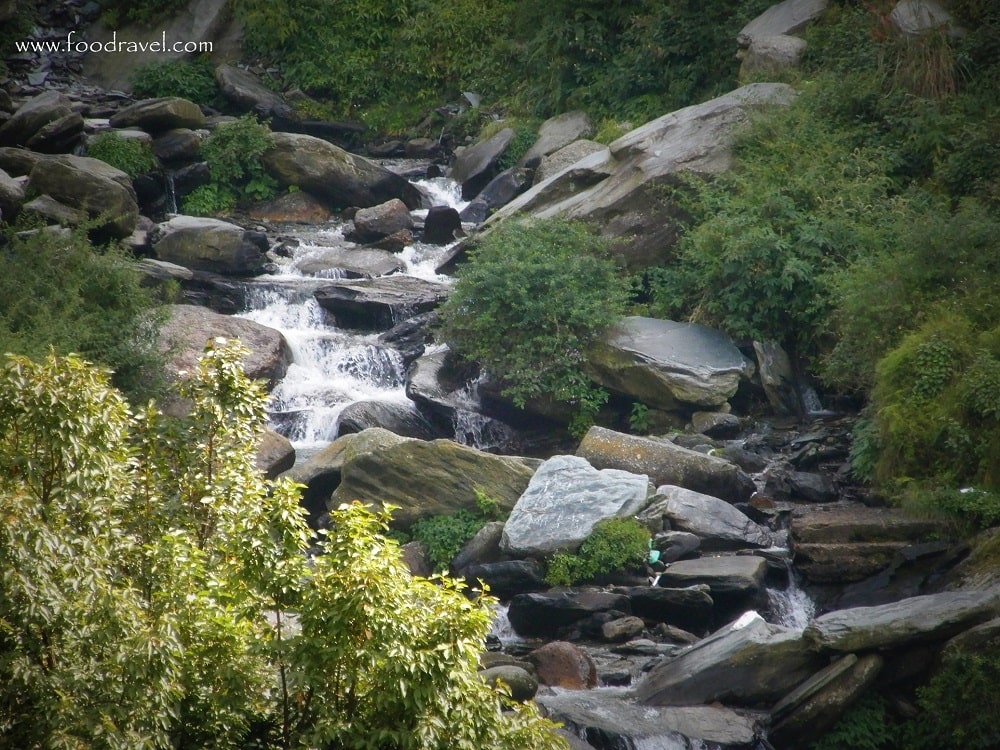 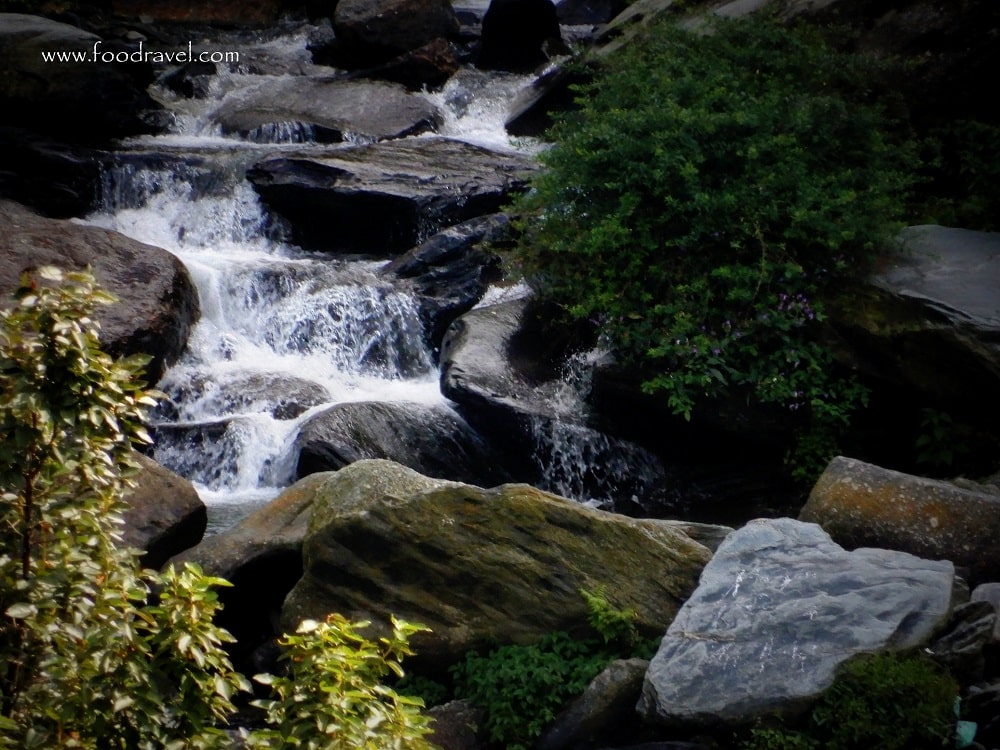 There were cafes around the waterfall and we sat at a café to relax and chill out. Yogesh ordered himself a cup of tea and you should know I never drink tea. So I just kept sitting and kept staring at the sky and the waterfall. The sound of the waterfall was running through my ears and was making me lose myself on the beats of the water beads falling off on the ground. This alluring combination of the waterfall with nature had captured my all attention and dragged the world worries out of me (at least for as long as I stayed there).

We left the falls after spending more than an hour there. Though I wanted to sit and enjoy the peaceful nature more we were supposed to cover some more places the same day, also it was crowded and wasn’t that much serene which I expected. 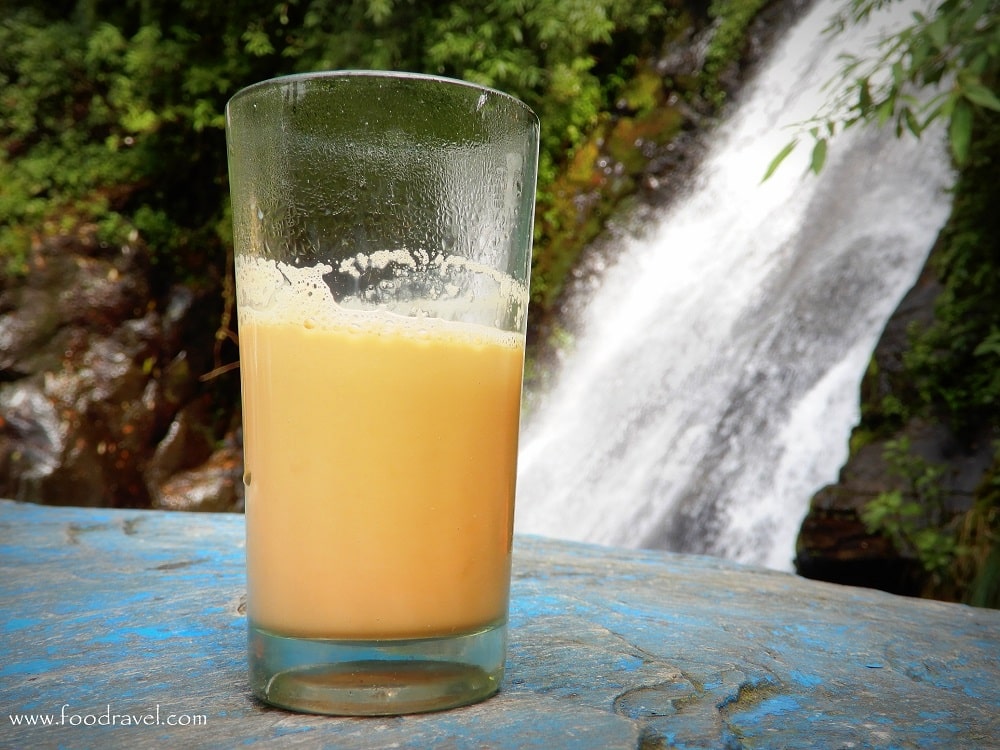 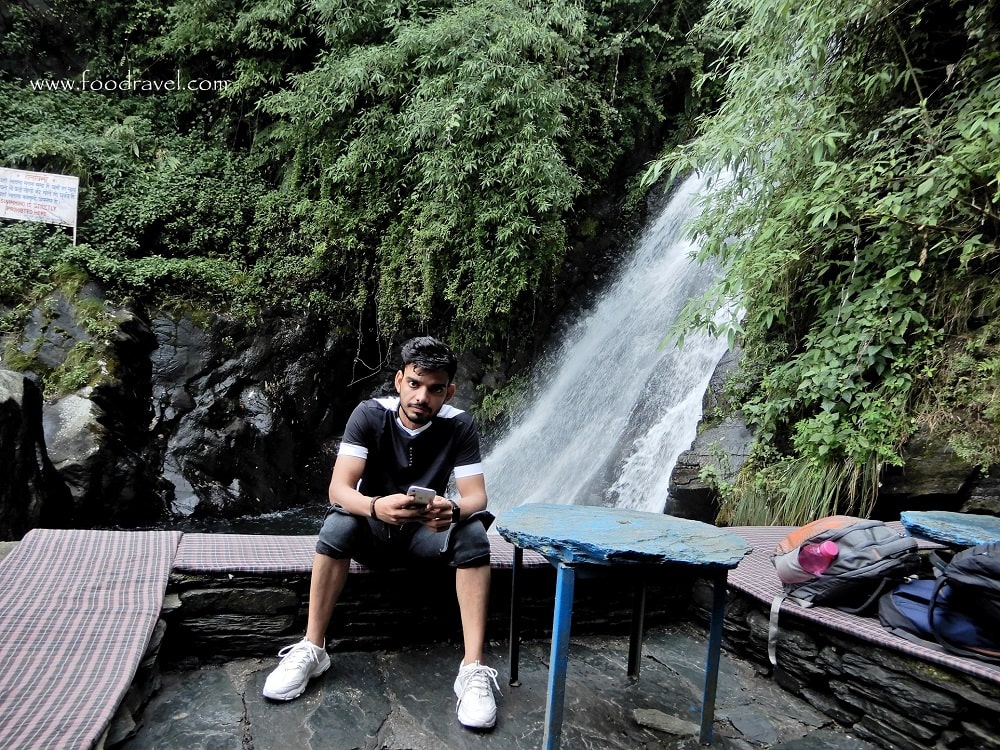 If you are trekking to Bhagsu Nag waterfalls for the first time, you should know a little bit about the place. Bhasgu Nag waterfall is located at a hike of around 30 minutes (depends on person to person) from the Bhagsu Nag Temple and the temple is again around 2KM away from Mcleod Ganj. Bhagsu Nag falls is known for its picturesque views, serenity, and photography. There is no entry fee.

Located in Bhagsu Village, the waterfall is one of the most prominent attractions in Mcleod Ganj. Nestled in the quaint ambiance of the green nature surrounded by cliffs, this enchanting waterfall is located at an elevation of around 7000 feet above the sea-level. The mystic waterfall fills everyone with peace and tranquillity. The breathtaking views of the valley from the waterfall is thrilling enough and is a perfect place for photographers. The cold water of Bhagsu waterfall falling off from a height of around 20 meters composes a piece of music which is goose bumping and among the best experiences of life.

After spending three days at home, thinking where to go for the next three days, my love for McLeod Ganj hit me hard. Hurriedly, I called my friend and decided to leave. Fortunately, he too accepted this unwanted, sudden call and got ready. So together, we left from ISBT Kashmiri Gate in the night and Kangra welcomed us. We took a small trek to Bhagsu from McLeod Ganj where I didn't get to visit the last year I was there. I planned to come back at the same time the following year but it didn't work out somehow. Thus, I returned to McLeod after a year and three months. Bhagsu gave me incredible reason of returning again and I did it. The sound of water falling off on the stones from the top, the misty surroundings, green lush terrain, everything was peaceful and serene. That's what I needed. That's what everyone living a 9 to 5 job in Delhi needs. . . . . . . . . . . . . . . . Follow @my_foodravel for more stories #foodravel #bhagsu #mcleodganj #trek #travel #traveladdict #travellove #instatravel #travelgoals #friendshipgoal #travellover #travelphotography #bhagsunag #waterfall #nature #naturelove #travelblog #travelwriter #traveljournal #travelgram #instatravels #traveling #travelstagram #nomad #vagabond #wanderlust #roamer

Tips for trekking to Bhagsu Nag

Though the trek distance from the village to the waterfall is very less yet one should be prepared with everything. 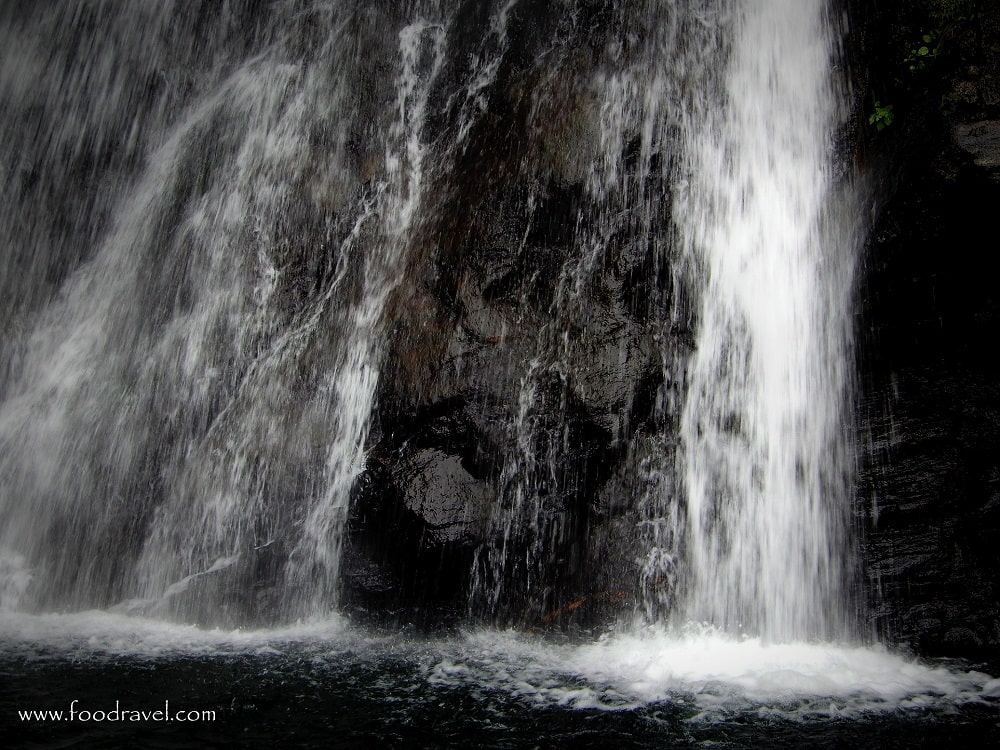 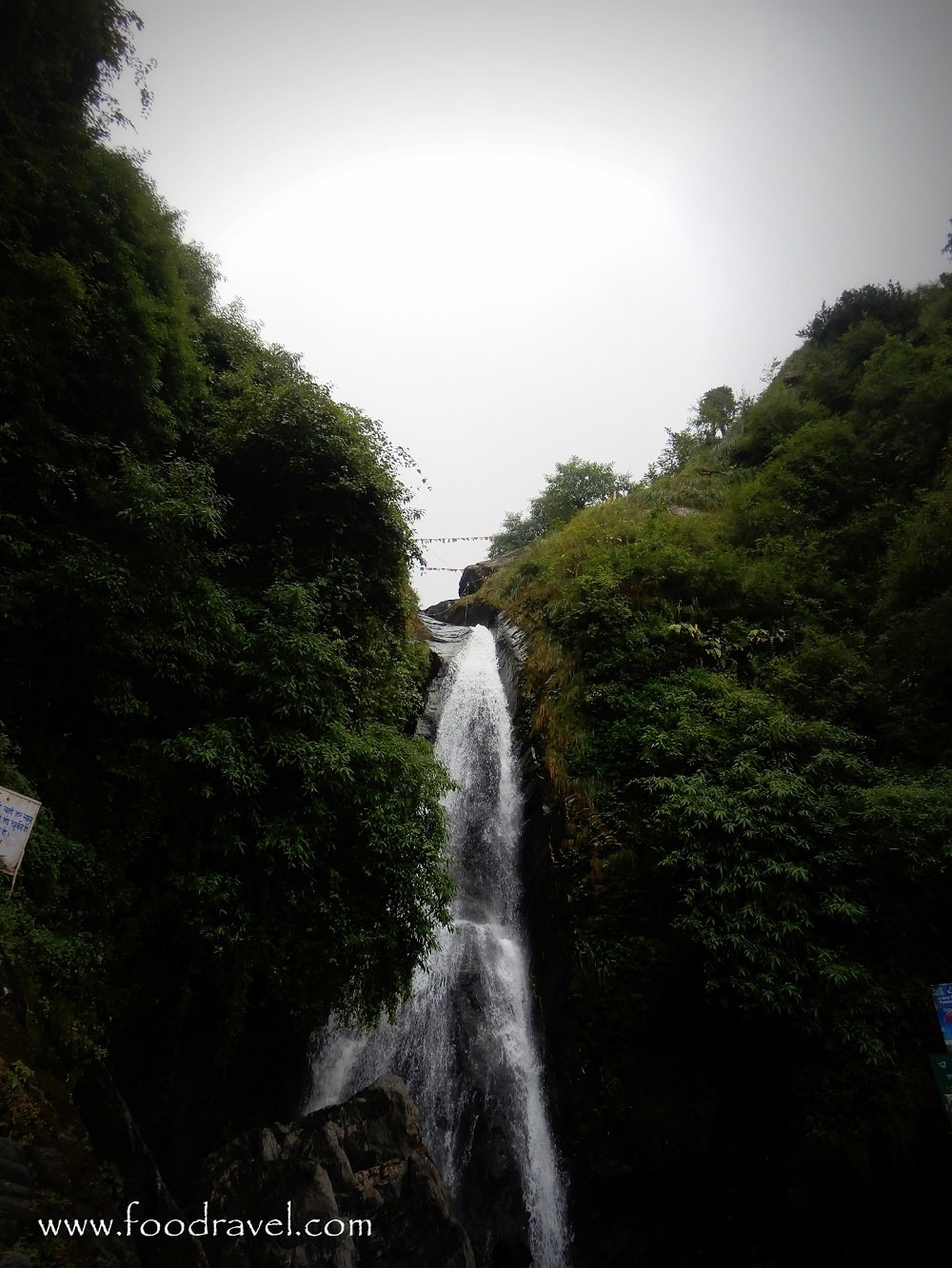 How to reach Bhagsu Nag Waterfall?

It is very easy to reach the Bhagsu Nag waterfall. It is located at a distance of around 11 to 12KM from Dharamshala. You have to reach Mcleod Ganj and you can easily get cabs or buses from Dharamshala to Mcleod Ganj. Now from Mcleod Ganj, it is up to you if you want to hire a cab to reach Bhagsu Village or you want to walk to the village as I did. And from Bhagasu Temple, you have to hike for around half an hour to reach Bhagsu Nag waterfall.