My wild experience at the hills of Mahra Village

Life brings surprises at every moment. If you love traveling, you will surely want to cherish such moments. Such moments give a lot to learn and will make you aware of the things the next time. Last week I traveled to my maternal uncle’s village, Mahra (Mahda). It is a small village located in Charkhi Dadri district which is the youngest district of Haryana state. And this journey turned out to be one of the most memorable journeys of my life. Travelling has always been a fun and learning experience for me. No matter short or long, such journeys are always wonderful. I was lost in my childhood when I stepped in Mahra village.

I spent a big part of my childhood in this village. Considering this is my maternal uncle’s village, Mahra has always been my favorite, since I lived here, I studied here. Every day, I used to wake up to the beautiful sounds of the birds chirruping, peacocks singing, landmass covered with green crops, and the hills. Every morning used to be such a beautiful journey. Though I have spent my childhood here like every other Indian kid, but I also studied here. I moved to my maternal uncle’s in 5th class. I was admitted to NRJ Ser. Sec. School Jhujhu Kalan which is a village almost 4 KM away from Mahra village. This village used to be the main market. So, I studied here from 5th to 8th, till 2005, and then I went back to Mahendergarh for further schooling. And then my maternal uncle too left this village due to his government job and the house was locked. We would go once a year. This time, I didn’t plan the journey.

So, I came here after more than a decade. Back in my highschool, I used to study at my maternal uncle's. This place used to be our picnic and hangout place during weekend once in a while. We would come here to the temple. Back then these hills were all in good condition. But now many of the hills have been broken down due to heavy commercialization. Over the years, the stone crusher industries have mushroomed around and have taken down many of the cliffs. Now there is a concrete road which leads straight to the hills from the village for easy transportation of trucks and other vehicles. Also there is a helipad. There is an added benefit to the village in terms of employment but at the cost of nature. Back then we used to go and enjoy there but now that vibe is not felt. While I was on my way to this place through the road, I had the nostalgic feelings in my mind. I left this place in 2005 and I came here after such a long time. My maternal uncle's village, Mehra, district Charkhi Dadri, Haryana. . . . . . . . . . . . . . . . . . . . . . . . Follow @Food_Ravel for more travel stories. #travel #travellove #travelporn #nomad #wanderlust #vabagond #FoodRavel #travelwriter #traveladdict #travelingram #instatravel #travelismylife #hills #mountains #traveljournal #travelgram #travelgasm #tripotocommunity #traveltales #travelholic #travelpost #travelpic #travelphotography #travelcaptures #travelblog

But this time I visited the hills of Mahra village. This was nostalgic since I didn’t visit there almost after 2005 when I used to live there. I was in Jhojhu Kalan at Tanuj’s and thought to visit Mahra village. So, after attending the function at Tanuj’s, I went to my maternal uncle’s. My maternal uncle’s cousins live there with their families. I met with Dinesh who was at home. We made a plan to visit the hills and the famous temple Dada Dohla. So by 11 in the morning, he got a bike and headed to the hills. I love road trips and biking on such roads is an adventure.

Reminiscence of the past – a ride to Dada Dohla Mahra

Back in my childhood, the path to Dada Dohla used to be rocky. There was no proper road to the temple. But now due to stone crusher companies having their plants in the hills, not only there is a proper road but also there is a helipad for the helicopters to land. Also, the road has made the ride easier and quicker. Much of the village is changed over the years. Faces changed, so many new houses, new faces, but the memories were the same.

Read here – How often do you travel?

Many small hills were broken down by these companies and the place is now a complete plain. This made sad to see. The hills were broken down for stones and other construction materials. So after a short nostalgic ride, we made it to Dada Dohla Temple. The temple is located on the top of a hill. A short trek will make you reach the temple. This was probably the first trekking I did back in my childhood. This time we had a bike, so we rode to the top parking place. After reaching there, I looked around. Back in childhood, whenever we used to come here, I used to have a complete 360-degree view of the surrounding which was very soothing to see all green as far as my sight could reach. From the viewpoint, we decided to go further over the hill for shooting and to have better look over the place. 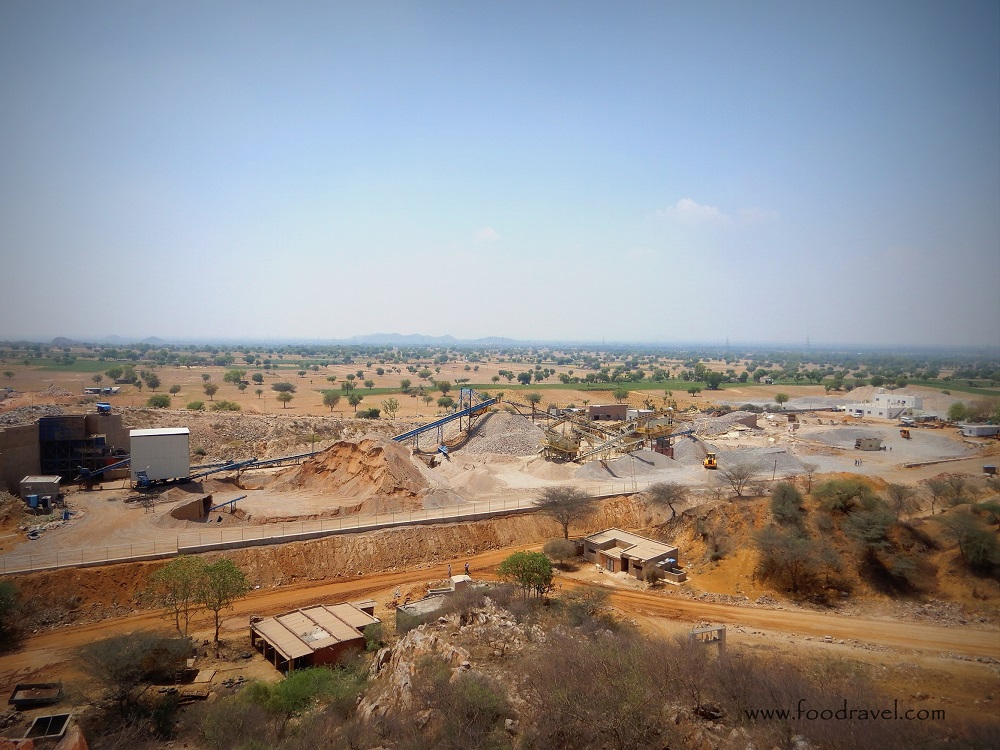 And I was attached by bees at Dada Dohla Mahra Village

We climbed further and reached almost at the peak of the hill. The views from there were truly panoramic. I took out the camera, fixed it on the guerrilla pod, and started shooting. While I was shooting, a bee from somewhere came and sat on my camera. I shook the camera to get rid of it. But then I sat on my cousin’s shoulder. Soon, it came on me and I gave it a push with my finger. Soon, three came and started hovering around me. I got a little panic since I had the camera and we were at almost at the top of the hill. My cousin asked me not to anything and let the bees hover around. But then one bee got stuck in my hair and I had to thrash it away. And this was the disaster. I could hear the bees hovering around in a group. They were over my hands and two of them had also penetrated their poisonous sting in my body. 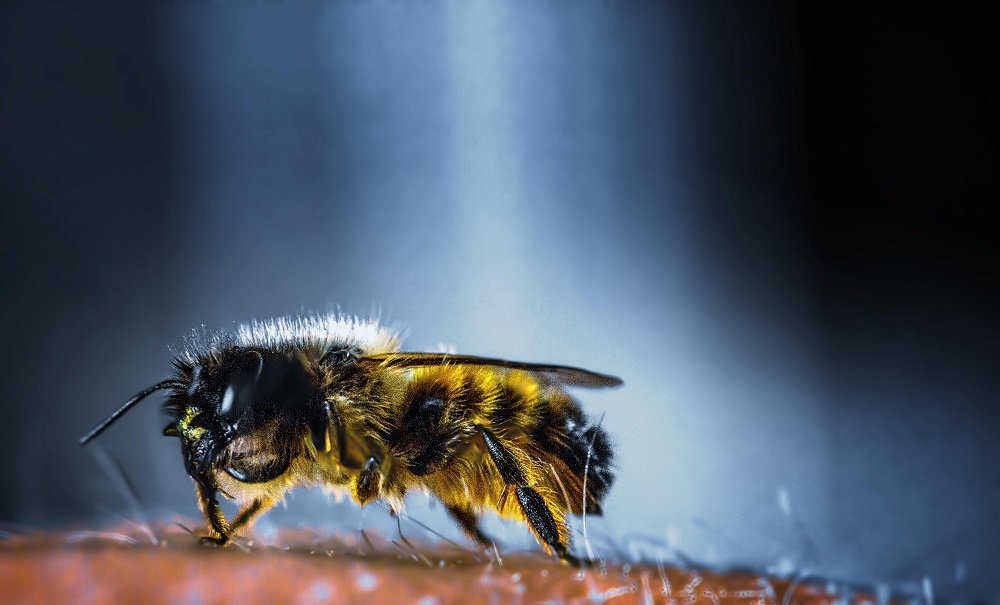 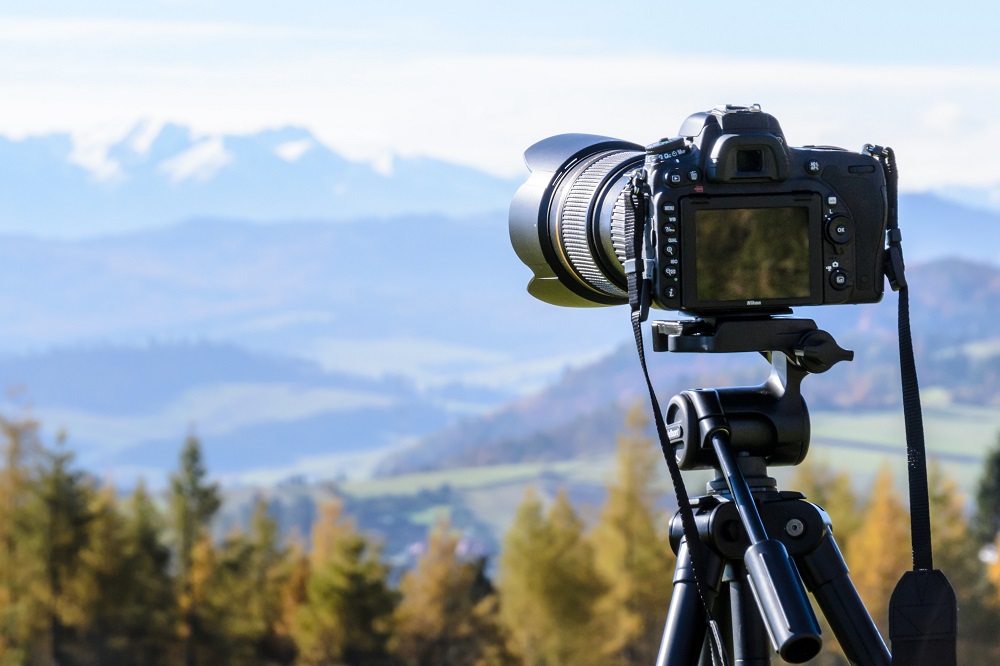 I started to run but my cousin asked me to stop. I jumped from a small height. I had a twisted ankle and muscular strain in my right thigh. My jungle boots saved me. But those bees didn’t spare me. They followed me and followed me. I sat on the ground and my cousin threw a small towel from my bag and I covered my face with it. Then he ran to the temple and brought a carpet. I covered myself with the carpet and kept sitting. I had to sit there for around an hour but they didn’t go away. They were still hovering over me. I was all exhausted due to the lack of oxygen and sweat. I was panting heavily and was about to lose my senses. Finally, I was told to remove the carpet and move slowly towards the temple. I did the same. Still, three bees were hovering over me. A person showed me a different way to escape and there was less chance of being followed by them. I took the same path and somehow I managed to save myself from those bees else there could have been a mishap.

That was my man vs wild experience at the hills. Traveling to this place after more such a long time not only brought back old memories but also gave me new memories which I won’t be able to forget. Being a travel lover, I love stories which I come across while I travel to different places and this story is worth sharing with others. Though I had a twisted ankle, damaged camera, and bee sting at several parts of the body, this will always be a memorable experience.