Camera is truly a gift of science to mankind. It not only captures moments but narrates stories and makes life full of happiness. One such camera which is full of stories is found in Jaipur. On my recent visit to Jaipur, I met a man who has kept two-generation old heritage alive; he owns the world’s oldest camera in Jaipur. It was truly a wonderful experience to see the oldest camera in Jaipur. I spoke with Tikam Chand who currently owns this vintage camera and he narrated so many interesting stories about it. His grandfather gave this camera to his father and his father gave it to him. Now he is guiding his children about this very special and rare box of memories. 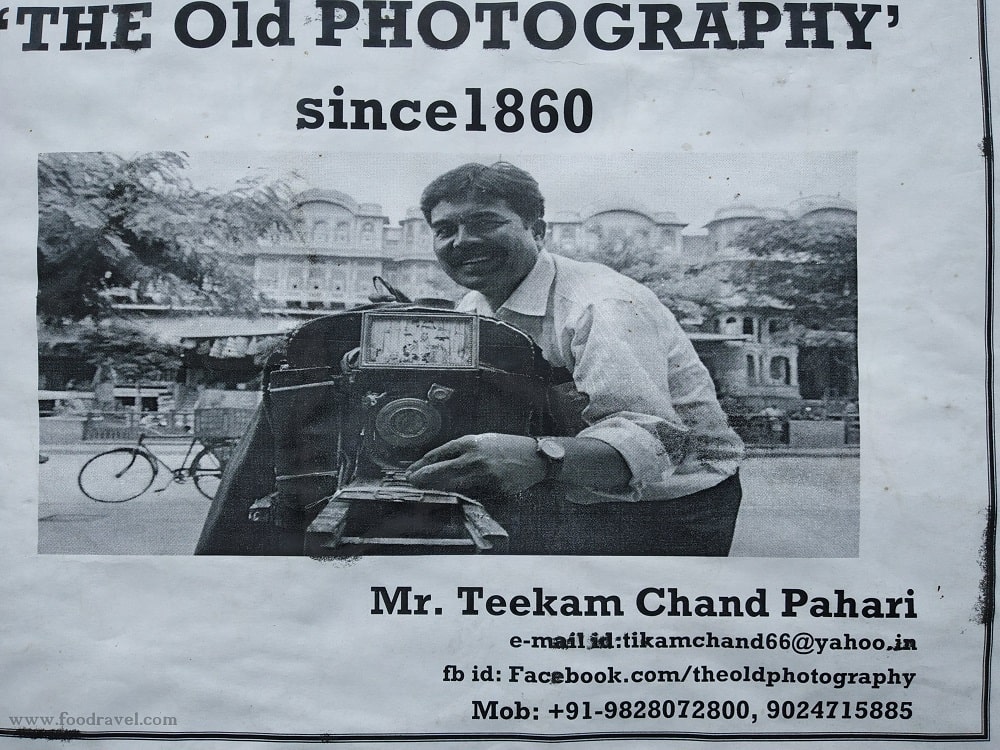 This camera was owned by Pahari Lal, who was the grandfather of Tikam Chand. Maharaja of Jaipur gifted this camera to his grandfather. Pahari Lal was fond of photography and has great interest and passion for camera and photography. The camera is said to be manufactured in the 1860s. This vintage camera has been passed to two generations and now Tikam Chand is the owner and he is taking care of this unique and the world’s oldest camera in Jaipur. Tikam Chand’s father passed this camera to him in 1977 and since then he has been carrying this heritage with proper care and love. 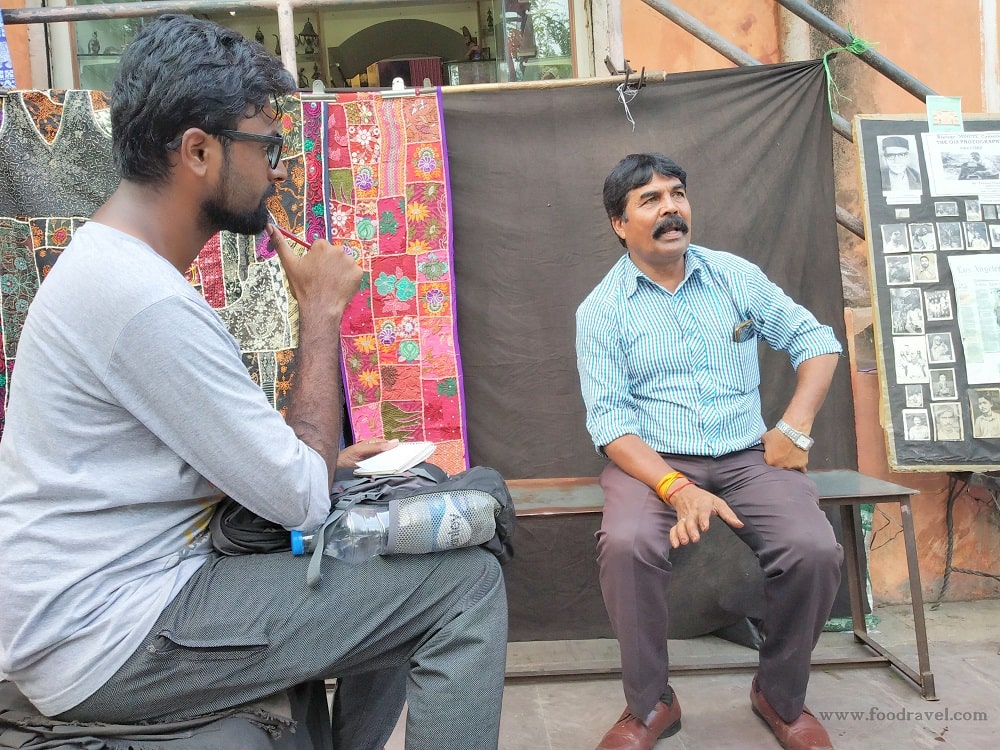 People used to come to get passport size photographs.

Tikam Chand recalls old days and says back then, people used to come for passport size photographs. They used to come for photographs for several official documentation works such as for any application form. It was the time of Black and White photography. People even used to ask for sepia colors. Only rich people used to have color photography and all the colorwork was used to be done by the artists using colors and brushes. 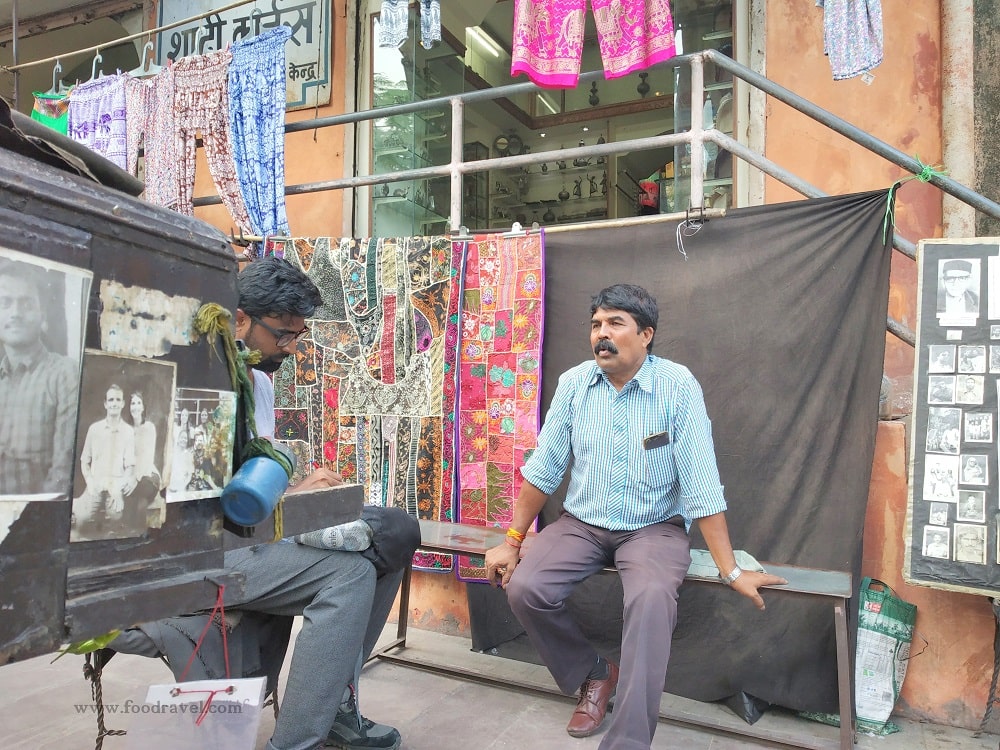 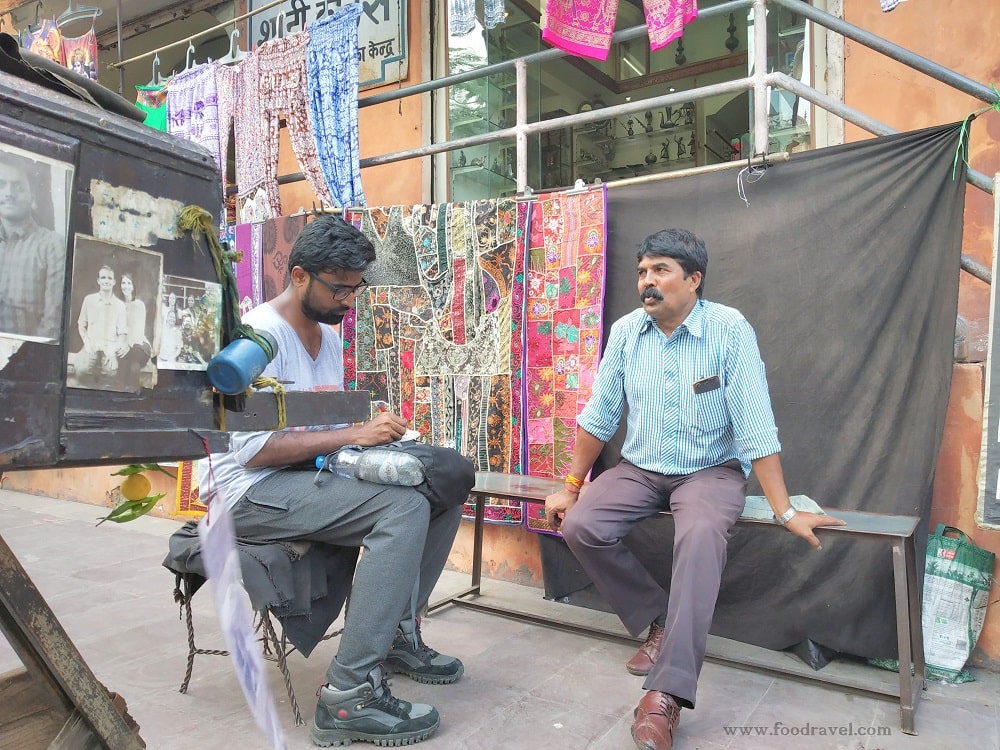 The world’s oldest camera in Jaipur is a complete studio in itself. It has its own fixer, film box, developer, and darkroom. The camera weighs around 20KG. The black box has magic and within a few minutes, it will take you back to an era of B&W photography. 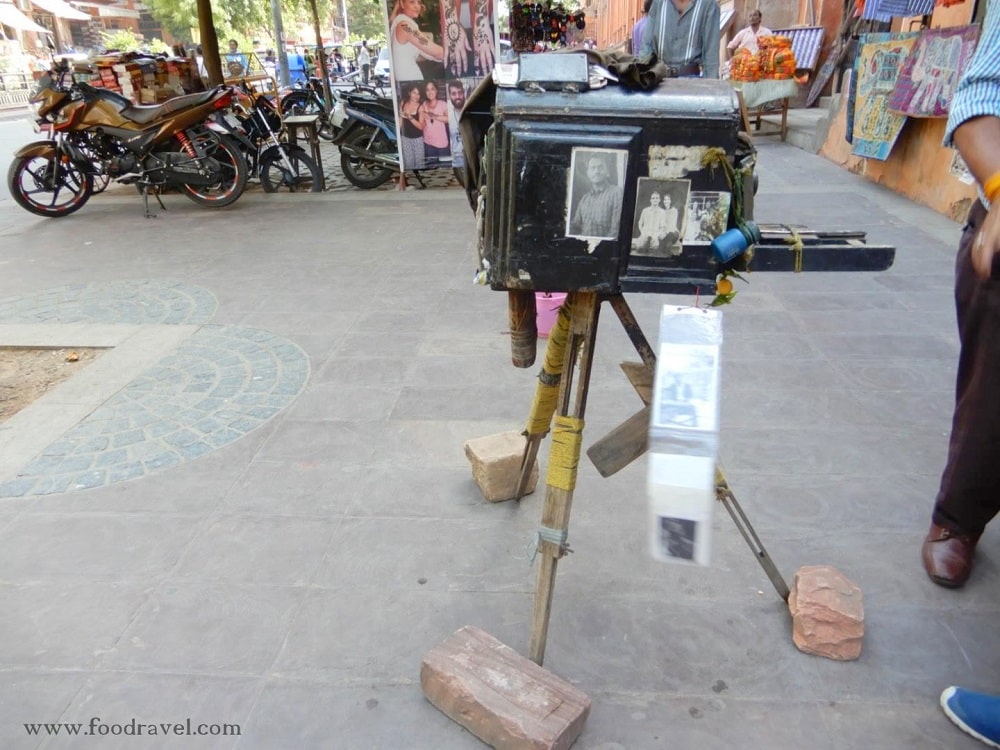 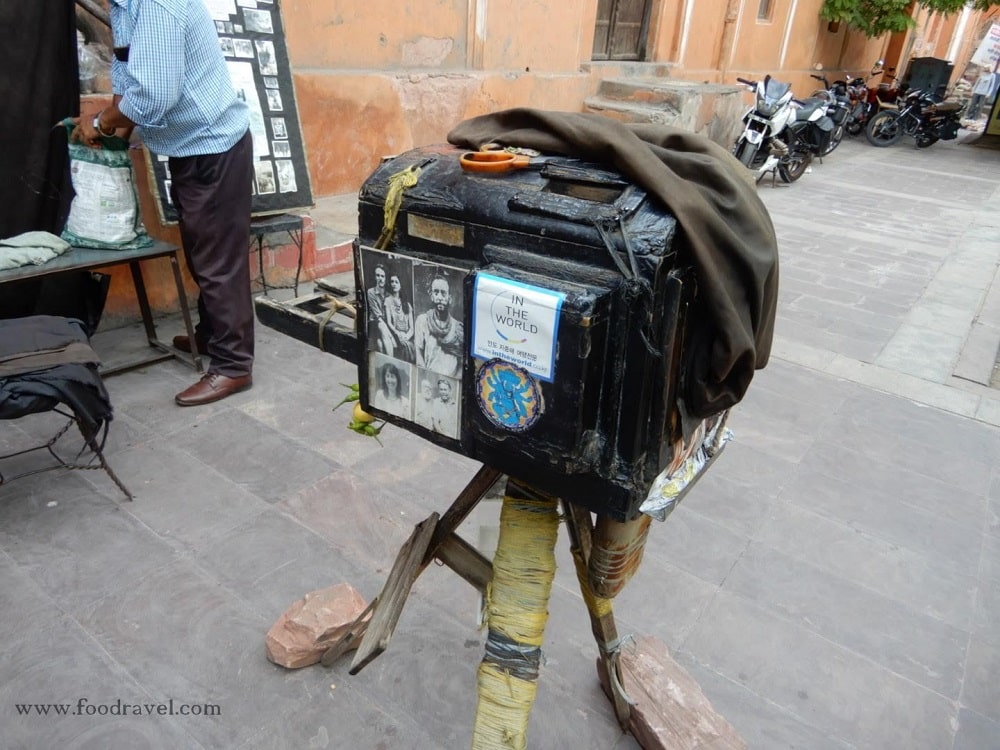 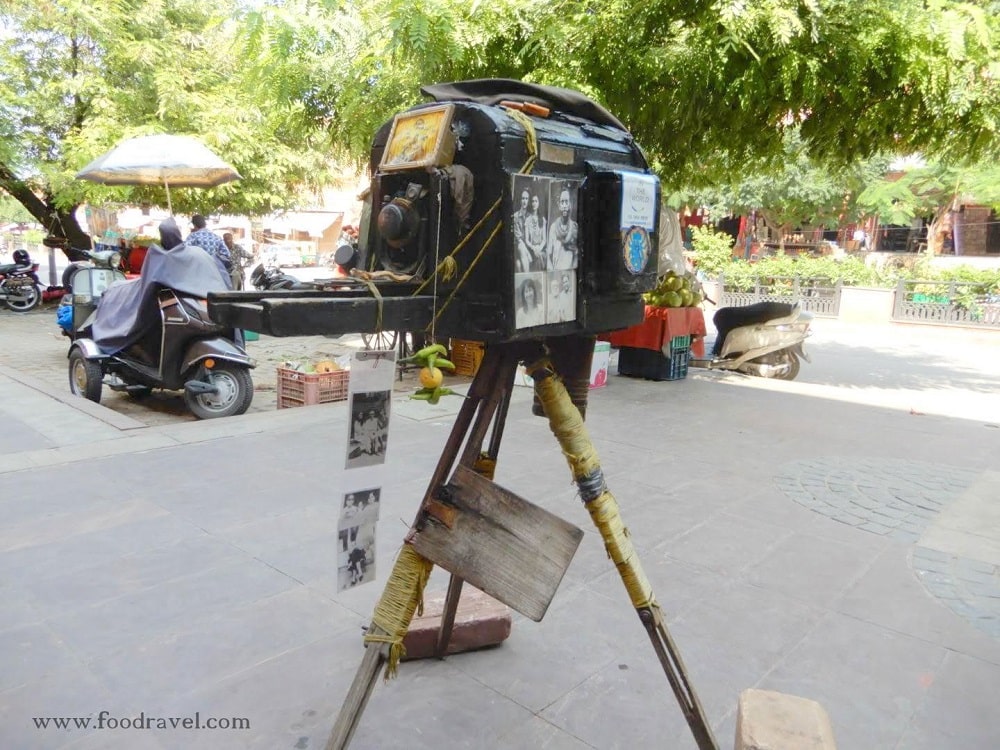 What used to be a box of happiness is now more of a tourist attraction at Hawa Mahal. Tikam Chand comes here daily with this camera and asks the tourists to get clicked with his vintage camera. People come and see it with curiosity. Tikam Chand tells,

“Young crowd comes and asks if it is a bioscope. They don’t understand the meaning and value of things like this. Sometimes, they even make fun which isn’t good.” 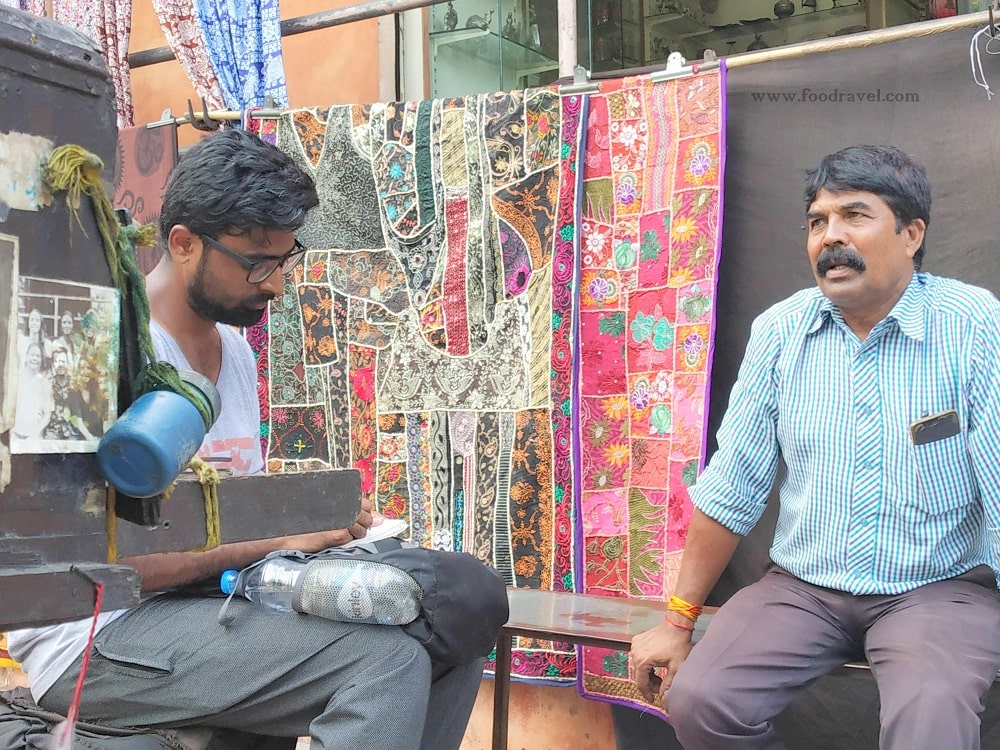 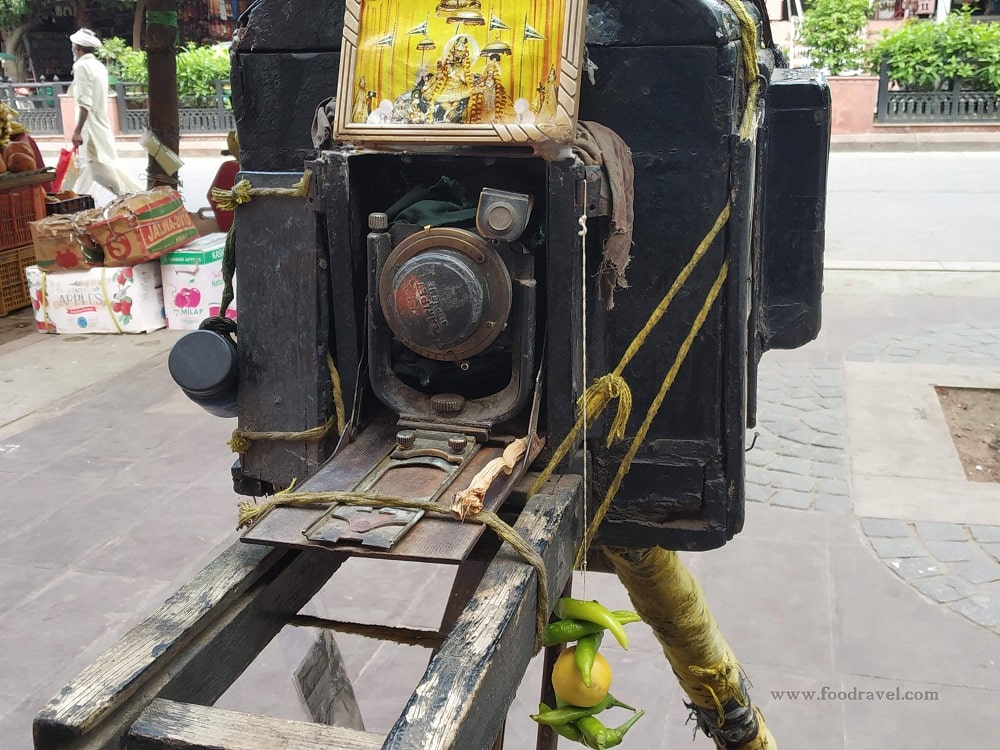 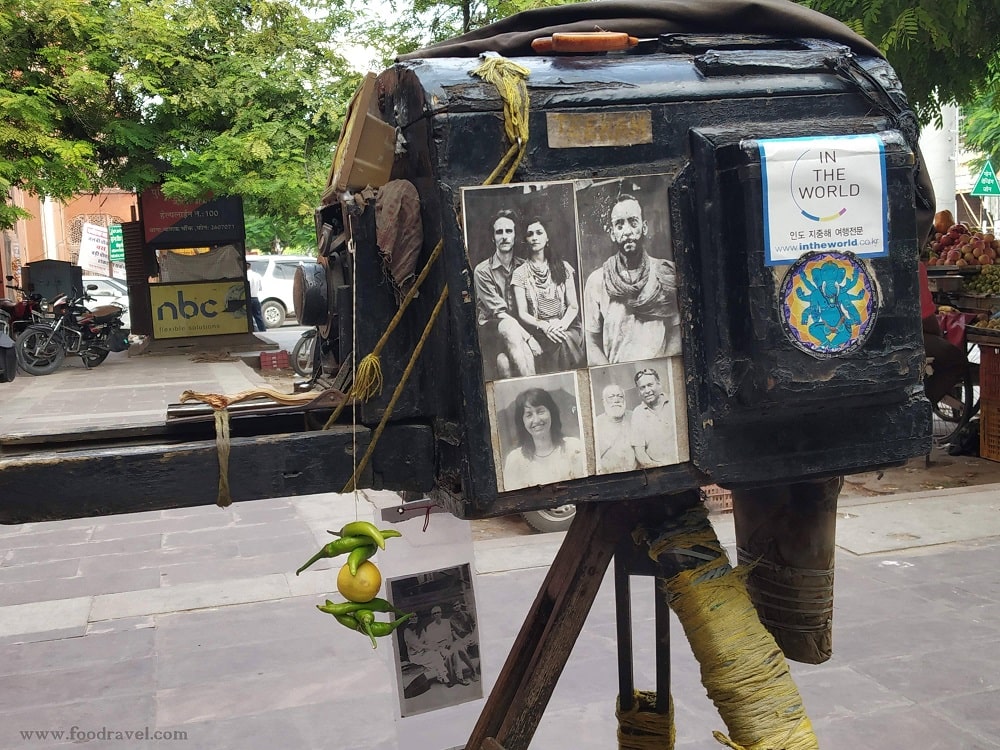 While he was narrating the stories, his voice had the pain. He further added,

“This is the age of smart devices. Now nobody takes interest in getting clicked with this camera. The reel cameras are out of the market, the companies are closed. Reel cameras were replaced by digital cameras and now everyone has the smartphone with cameras. But the thing which my camera has, it is nowhere to be found in the world. People from Vidhan sabha also used to come for photography. The government doesn’t take any initiative to preserve this centuries-old heritage.” 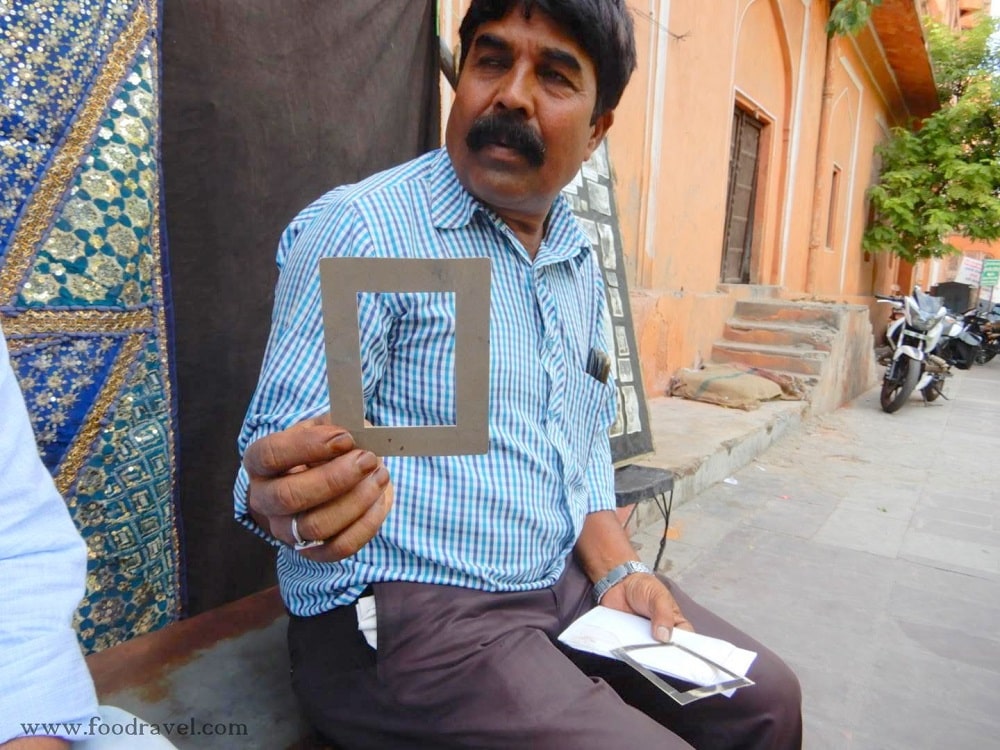 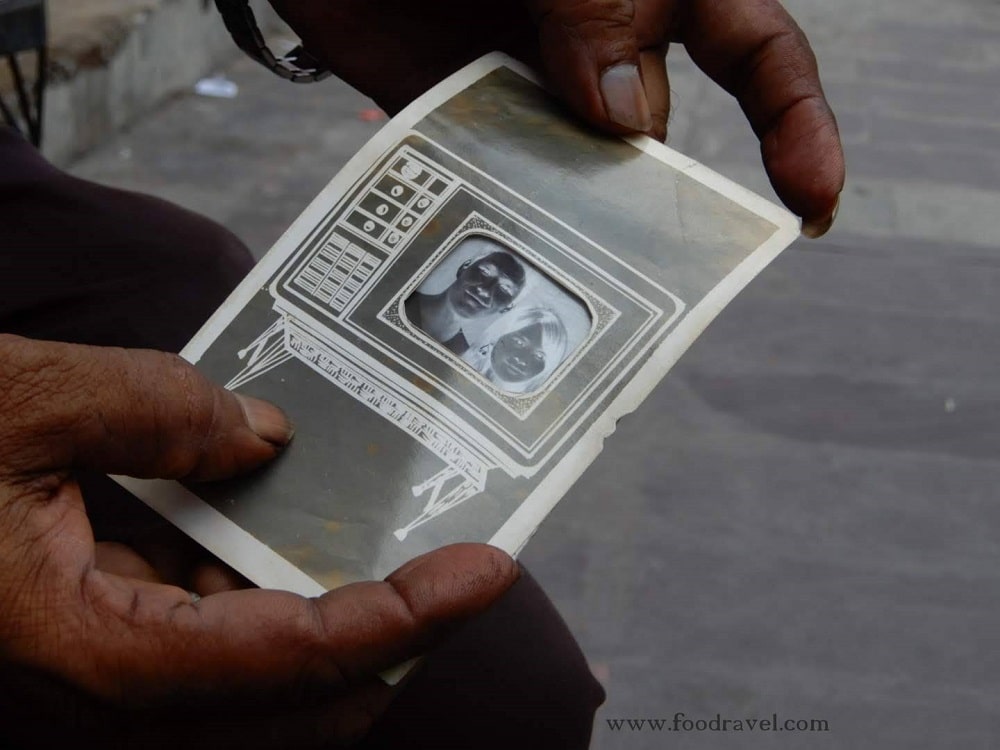 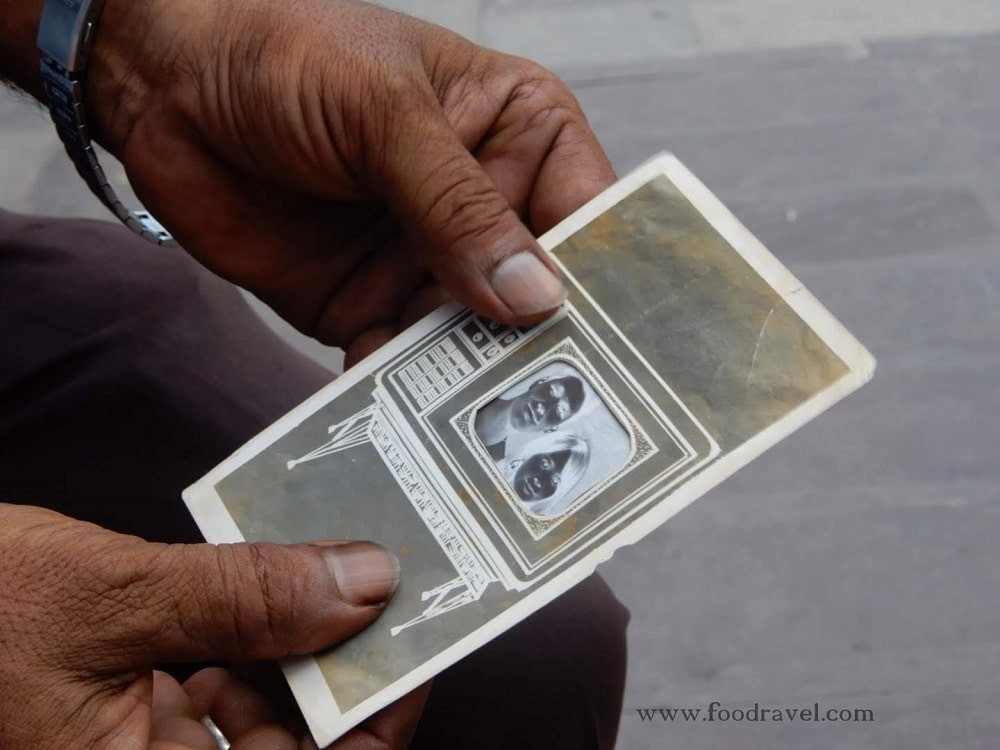 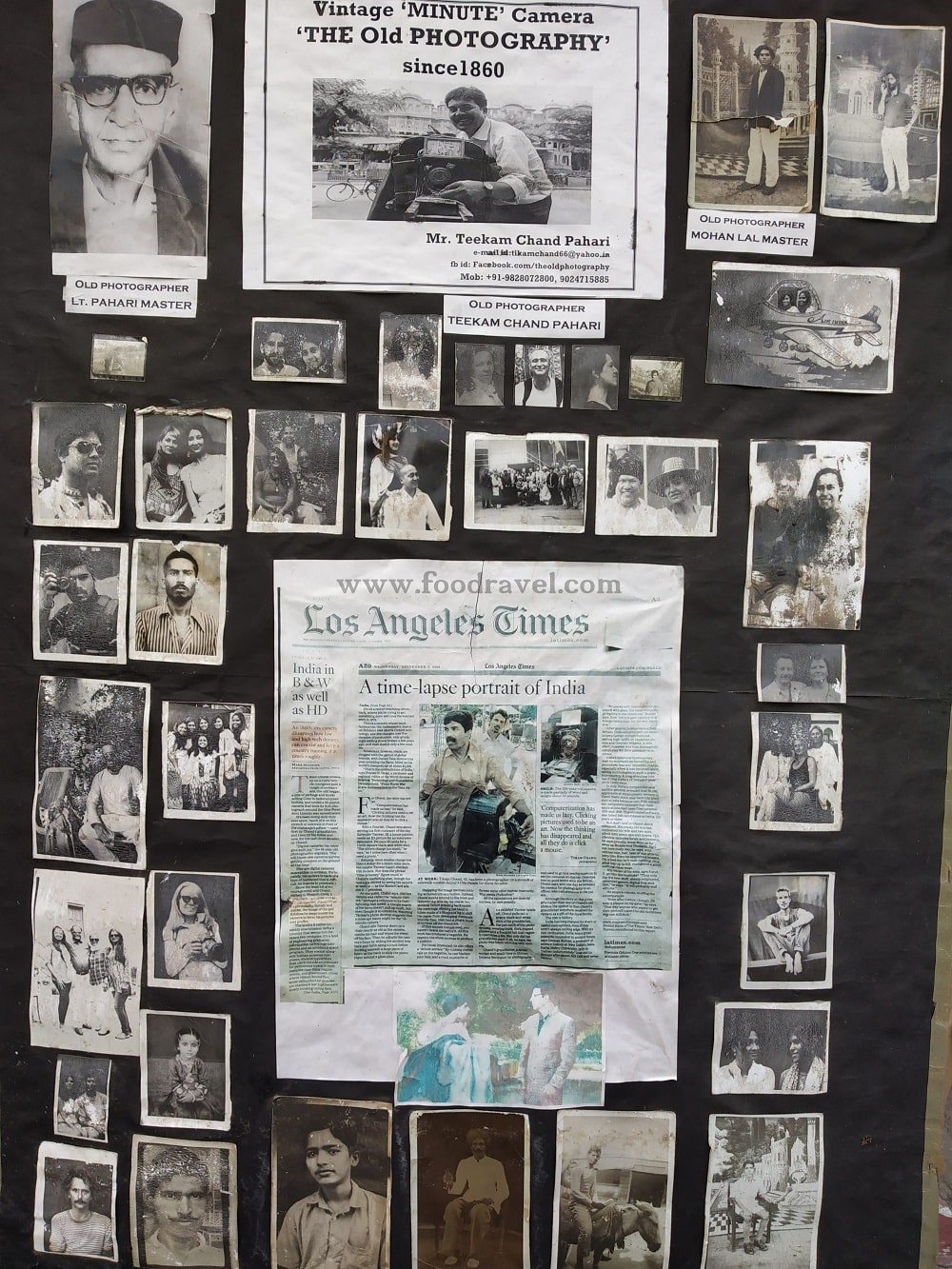 Upon asking what challenges he faced with the camera, he said,

“When Kodak stopped B&W in India, it broke him totally. He had no intention of carrying it forward. But one day, a gentleman by the name Mr. John from France came and discussed the camera. I told him the scenario of the photography market in India. He asked me not to give up on it. He said that he would arrange Kodak paper from France. And asked to continue. It was Mr. John who helped else this heritage would have been lost totally. He went back and arranged for me all the material required. He wanted the new generation to see it and to experience it.” 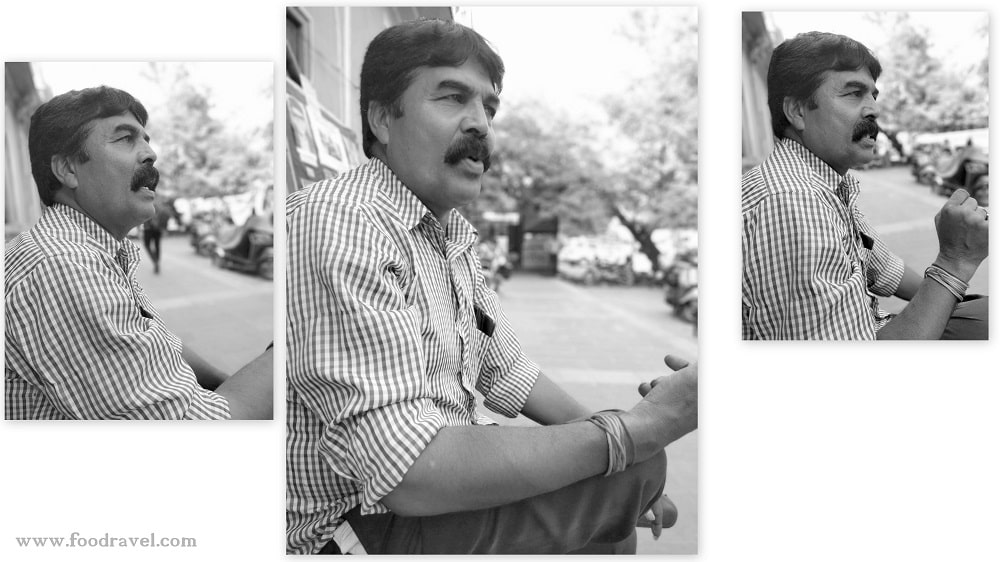 I asked about future plans, he replied,

“I got this heritage from my father and my father got it from my grandfather. But my children aren’t interested to carry it forward as there is no money. However, I have plans to teach them. And I will ask them to teach the coming generation too. We are planning to put it open for the public. I want this camera to live for more years and don’t want it to die in darkness.” 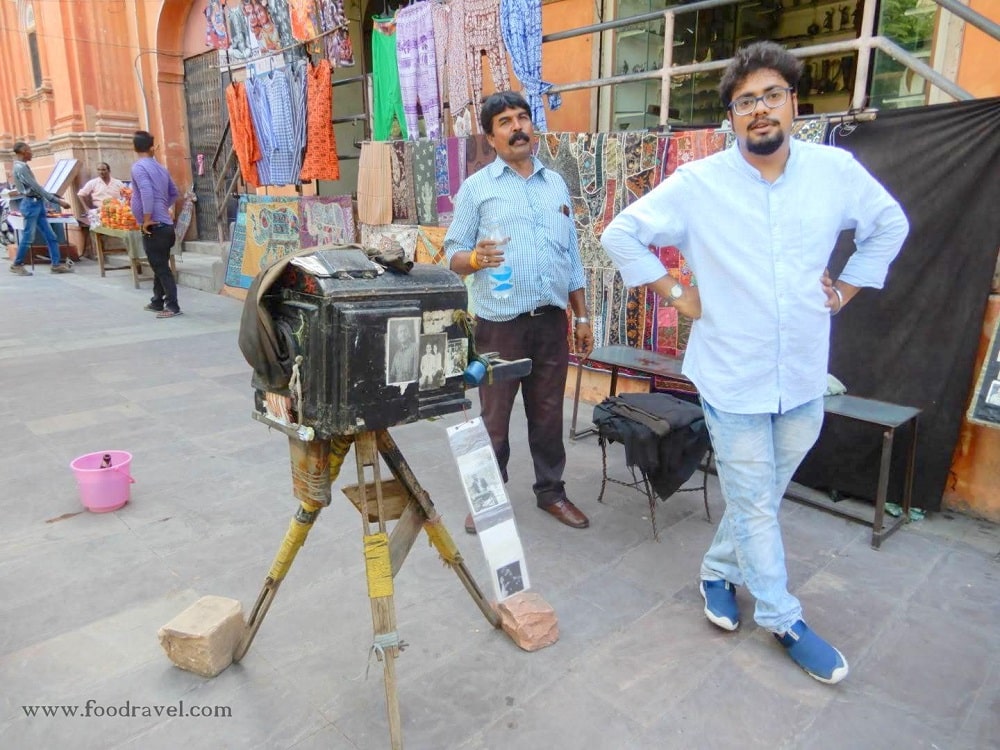 We had a very long discussion which was very long and emotional as well. I asked if anyone came forward to support you. His words were full of disappointment,

“This is a heritage which I have been carrying. But no action from the government has come forward for the support of this. I have been part of several movies. You can see me in Shudh Desi Romance, Sher Khan, and in Bhool Bhulaiyaa. I have been approached by a camera museum but I didn’t go. There are several documentaries on me in France, Brazil, Argentina but the irony is my government isn’t paying any attention. This is the world’s oldest camera in Jaipur and the government should do something to preserve it.”

Tikam Chand proudly says that the heritage doesn’t belong to him, but to the generation.