If you are traveling in Delhi, you will surely come across ancient historical monuments on the way. The national capital has a rich history and there are several historical buildings that date back to several hundred years old. One such building is Humayun’s Tomb. Located in Nizamuddin East, this is a tomb of Mughal Emperor Humayun. Mughals have ruled over Delhi and thus India for a long period of time. During their regime, they built several monuments and tombs which are now our preserved, maintained and these buildings add a great significance to our ancient culture. So, one fine day, I decided to visit some ancient structures of the city. After spending an hour or so at Agresen ki Baoli, I headed towards Humayun’s Tomb Delhi. 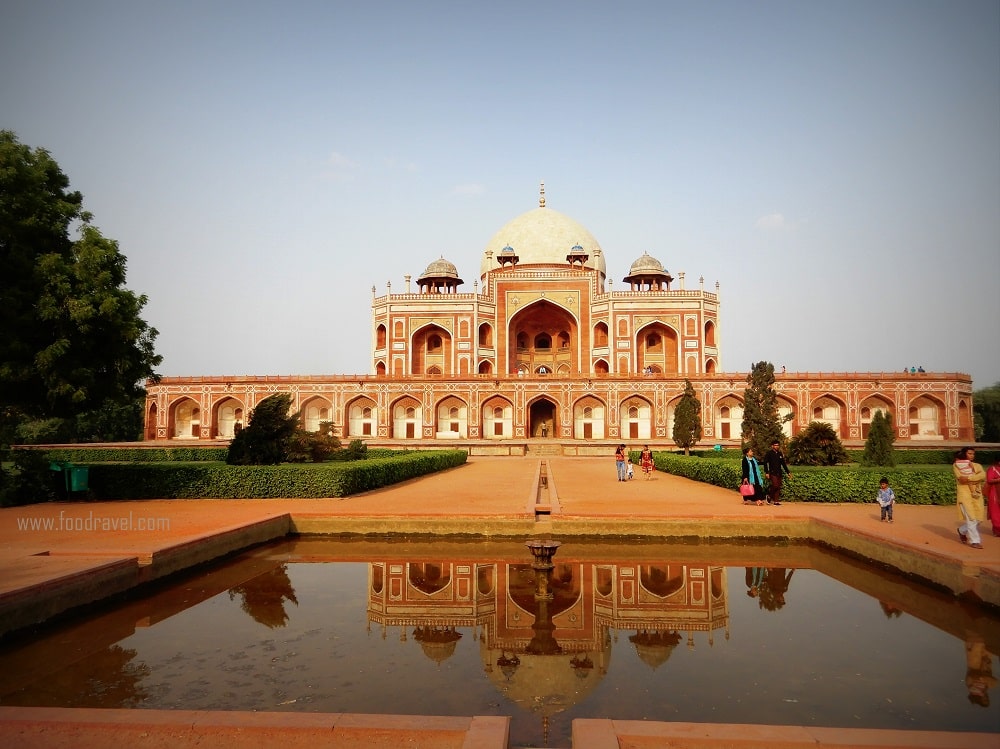 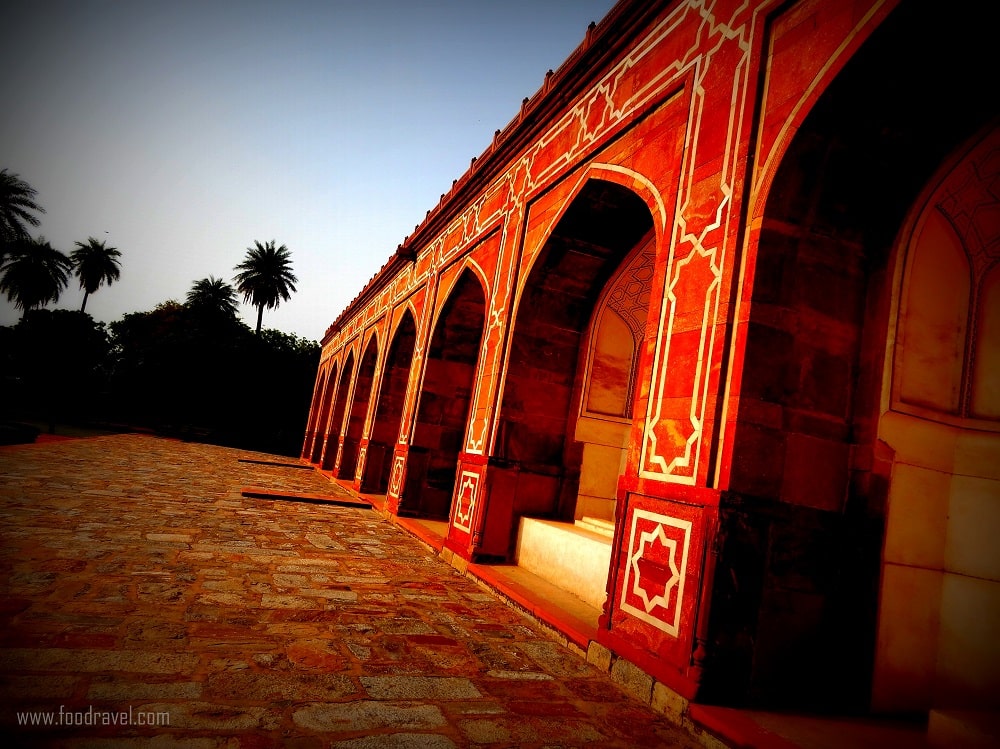 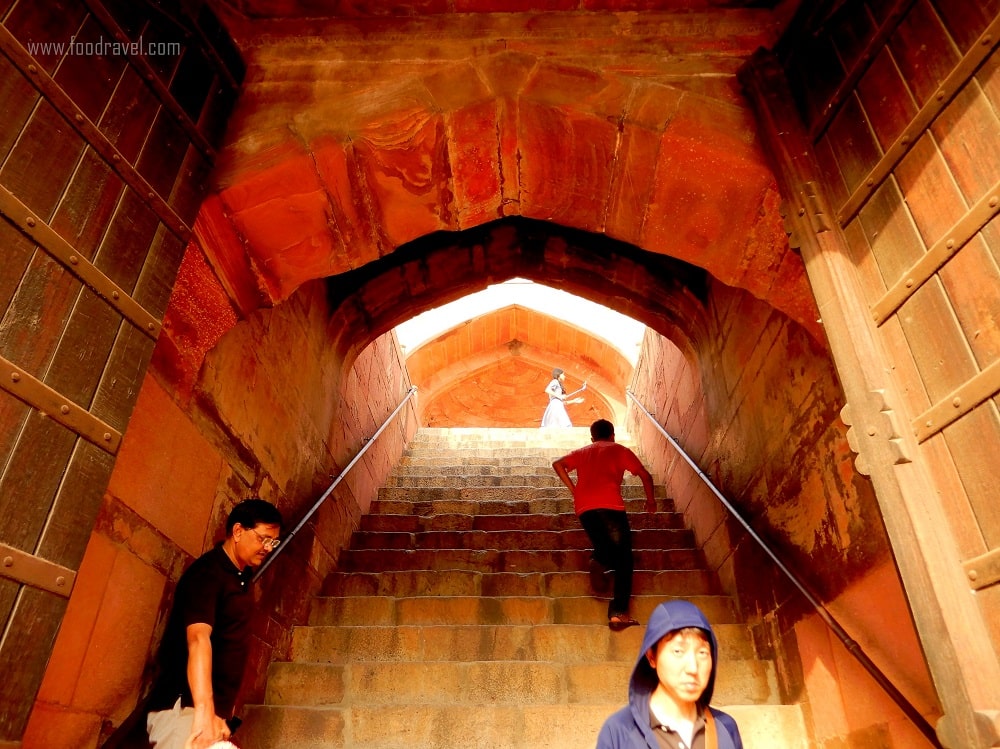 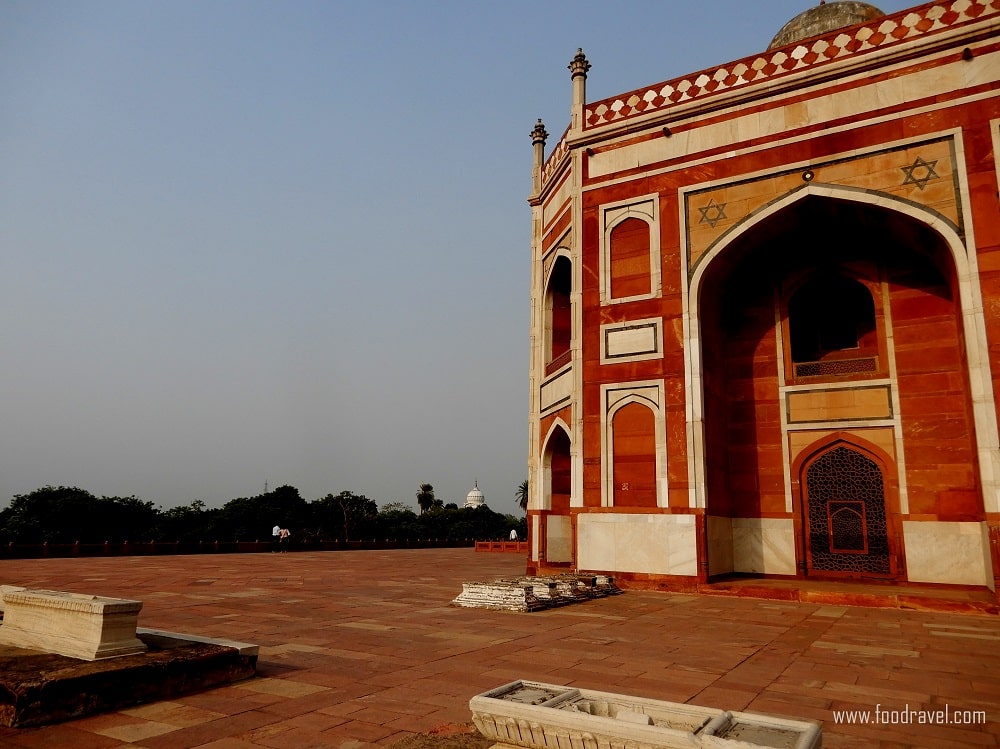 My Visit to Humayun’s Tomb Delhi

Last month, it was pretty hot and I was all drenched in sweat. I took a metro from Rajiv Chauk and got down at Jor Bagh metro station. From there, I walked for a while but it was too hot and I couldn’t manage thus, I booked an Ola and made my way to Humayun’s Tomb. It was already 4 and I needed to get there as soon as possible. Through the thick traffic of Delhi, the driver finally made me reach Humayun’s Tomb Delhi. One has to take a short walk to reach the main premises from the first entrance through the parking area. Humayun’s Tomb Delhi is a famous tourist attraction in the city and experiences travelers from different corners of the world.

I got the entry ticket which cost me 30 INR. For DSLR video recording, you need to pay an extra 25 INR. Phone recording or recording with a small Point & Shoot or compact camera is free. I carry a compact camera so I saved the extra fee. 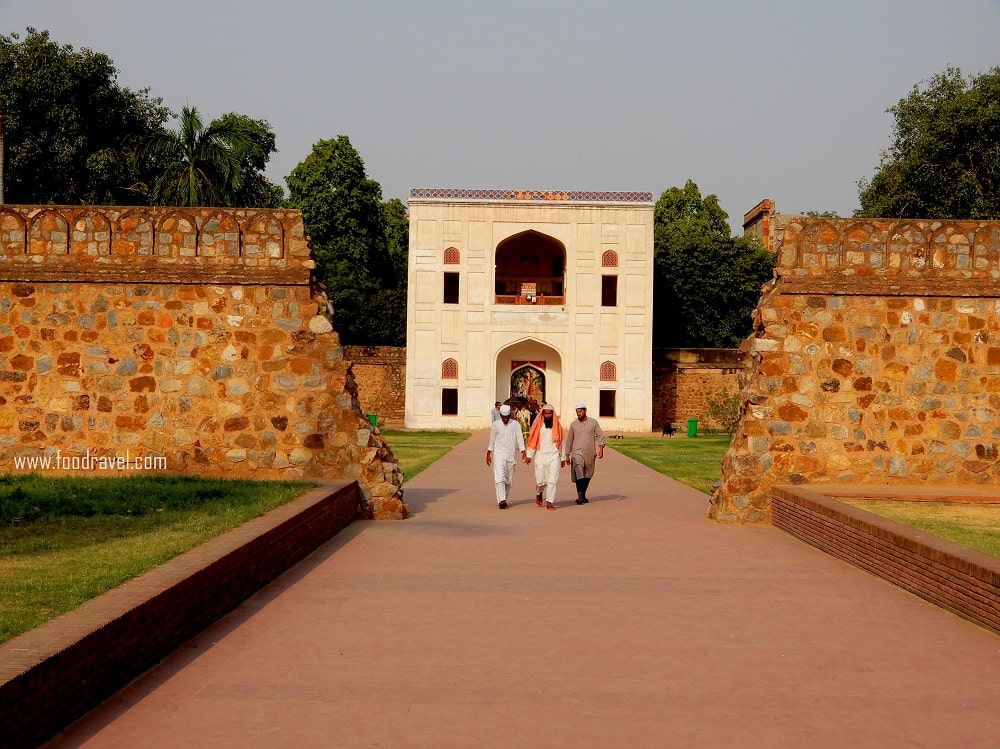 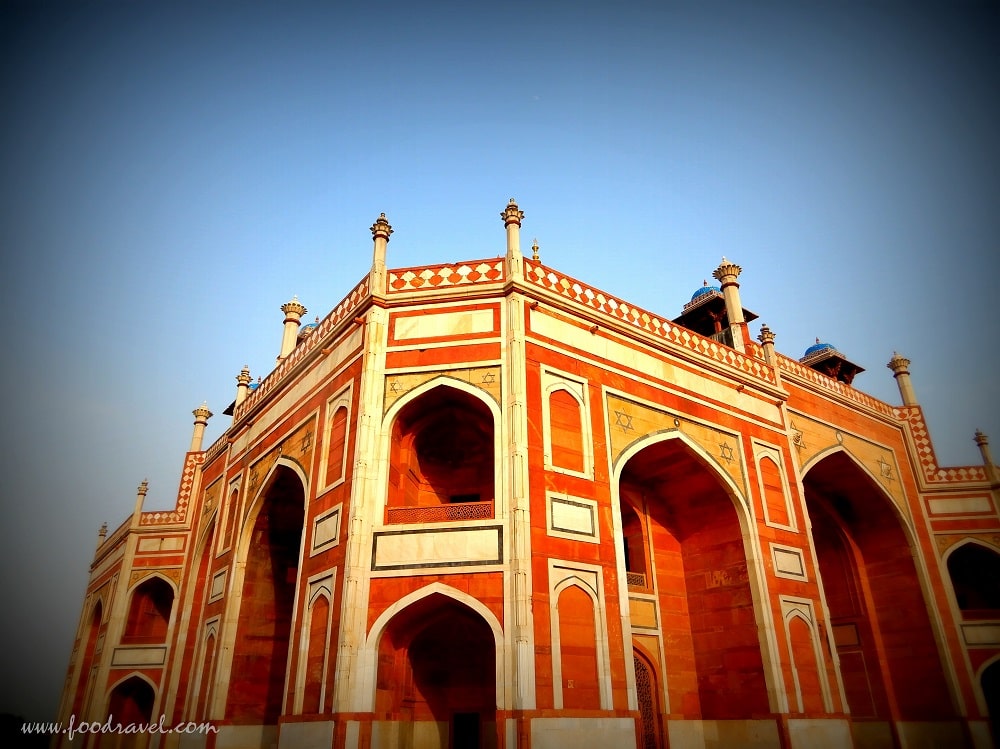 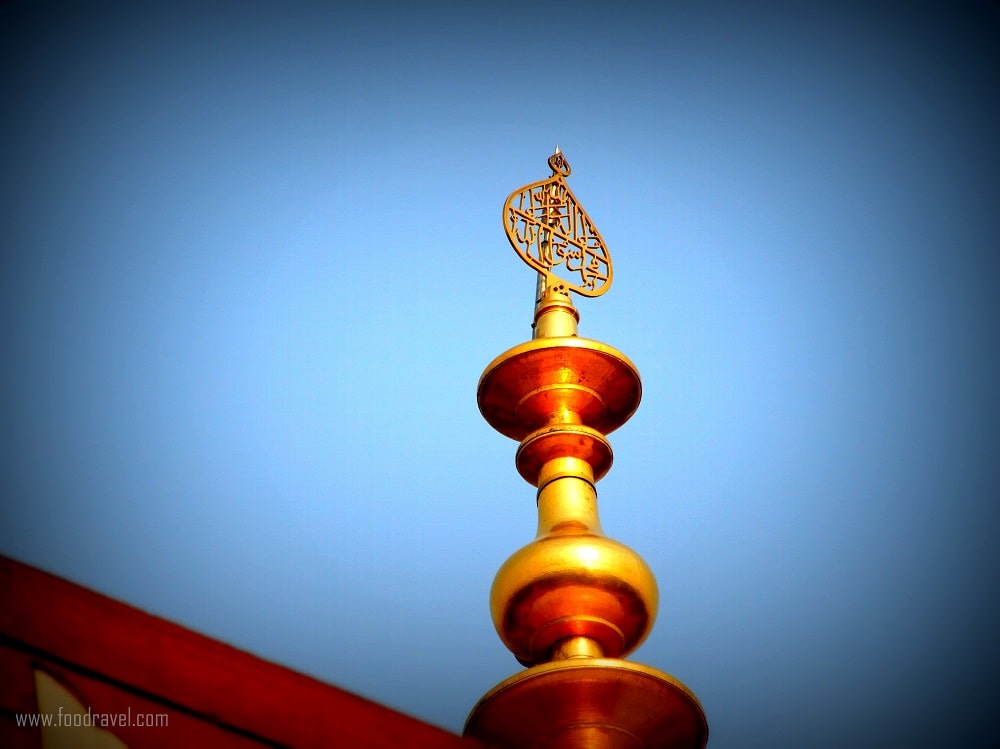 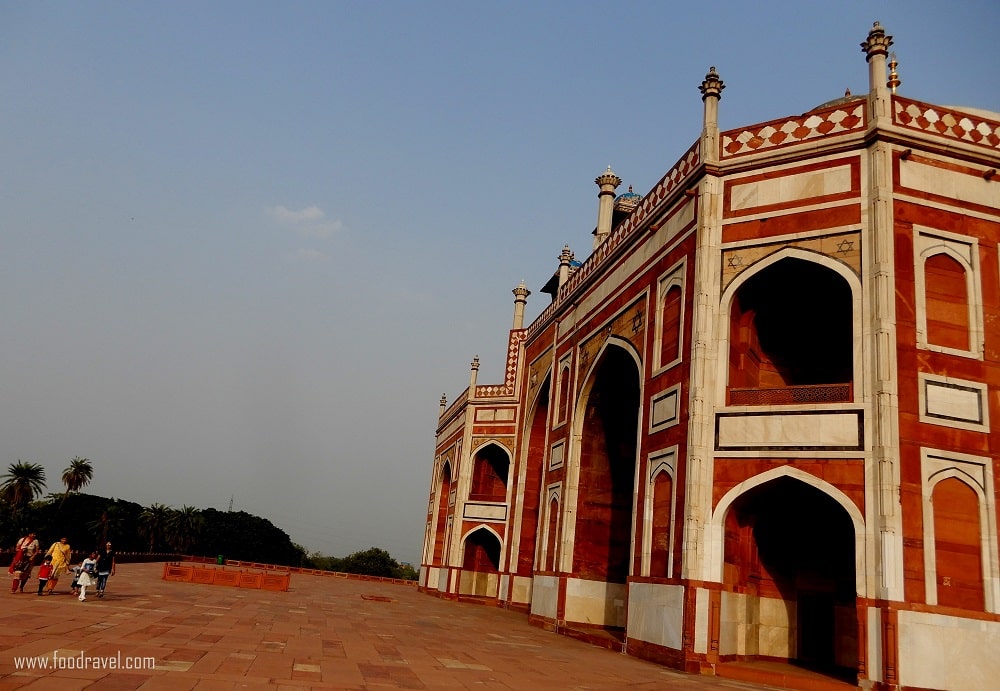 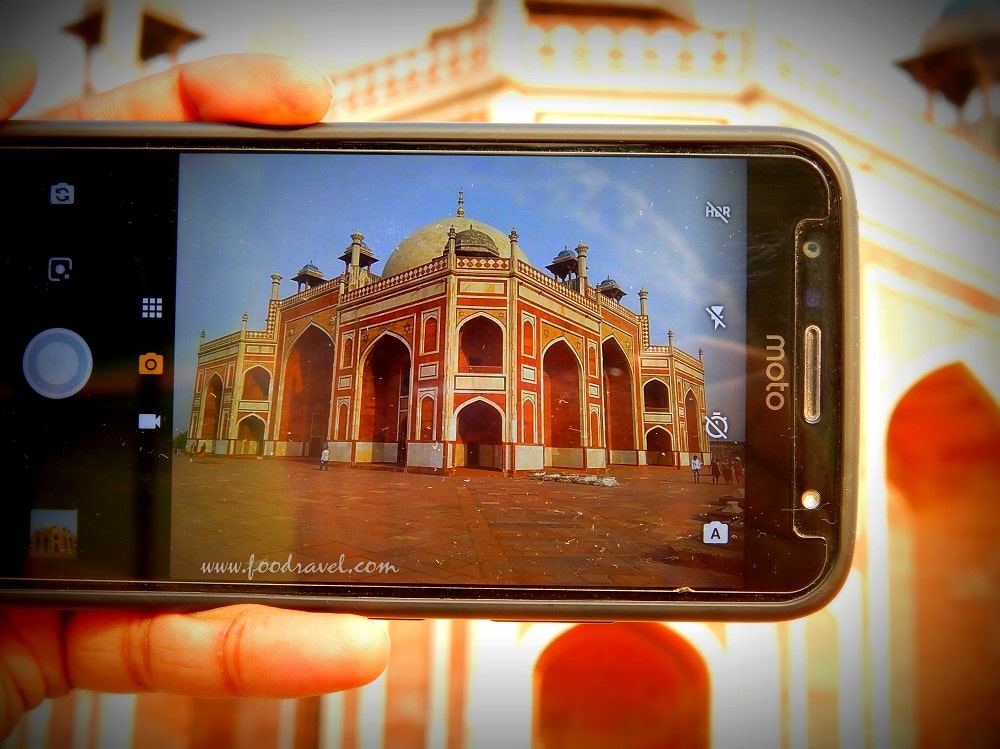 Humayun’s Tomb is a tomb of the Mughal Emperor which was commissioned by first wife Bega Begum. She was also known as Hazi Begum. The tomb was built in 1569 – 70. It was designed by Sayyid Muhammad and his father Mirak Mirza Ghiyas. This tomb is the first tomb ever to be designed as a garden-tomb in the Indian subcontinent. It was declared as UNESCO World Heritage Site in 1993. When Humayun died on 27th January 1556, at first his body was buried in Purana Quila. Nine years after his death in 1565, the constructed began for his tomb commissioned by Bega Begum. It was completed in 1572 and cost around 1.5 million rupees at that time. 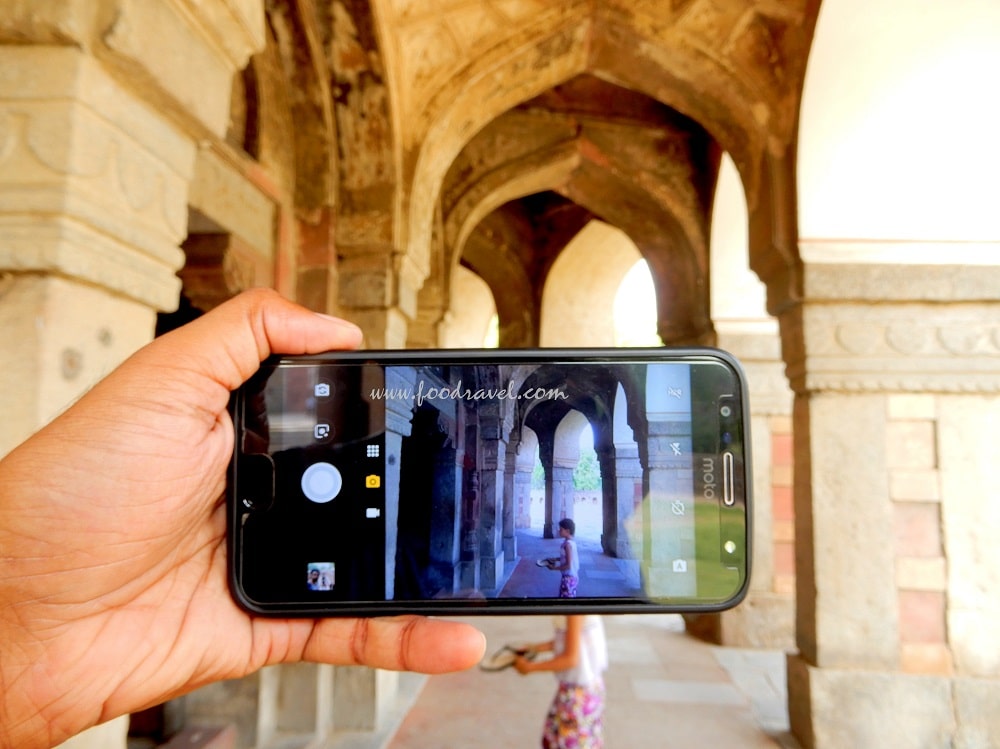 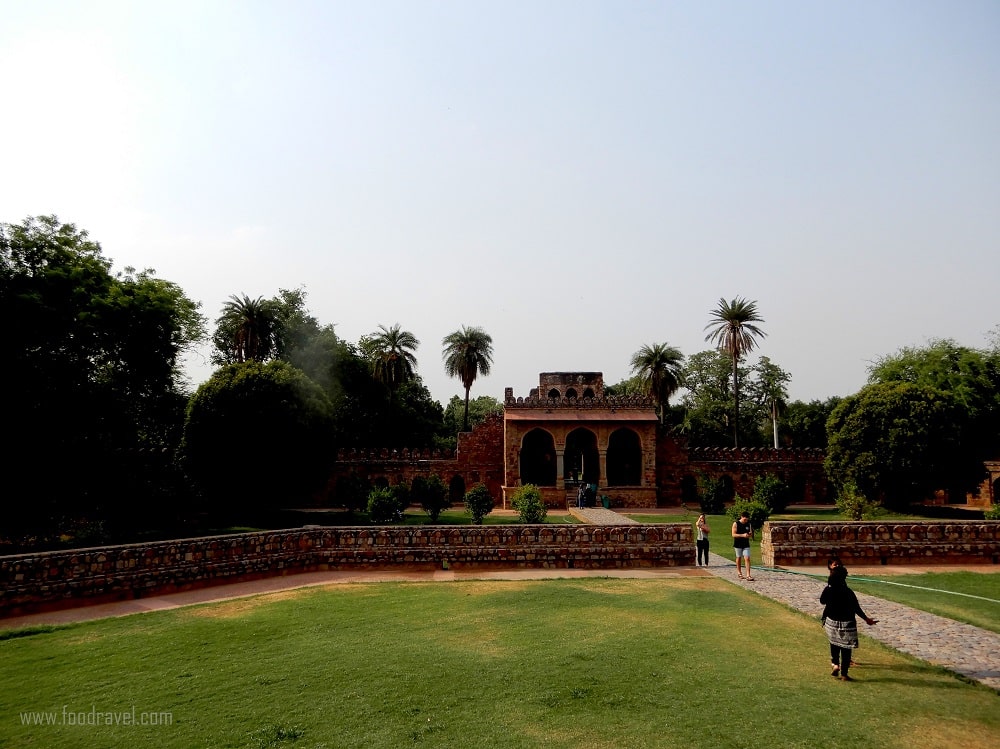 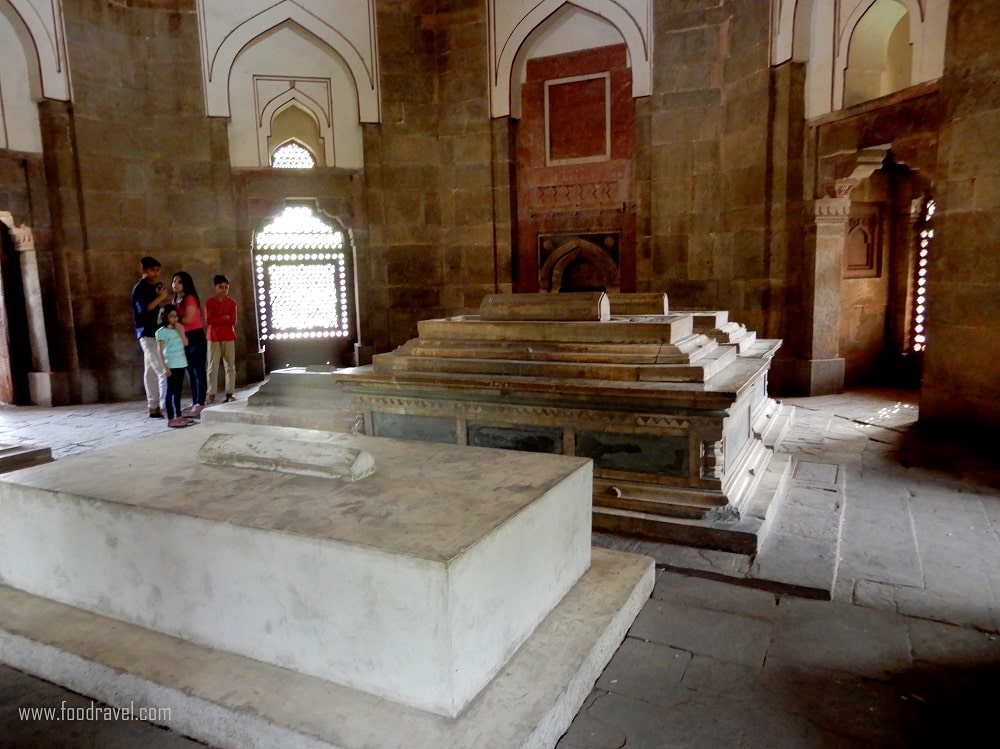 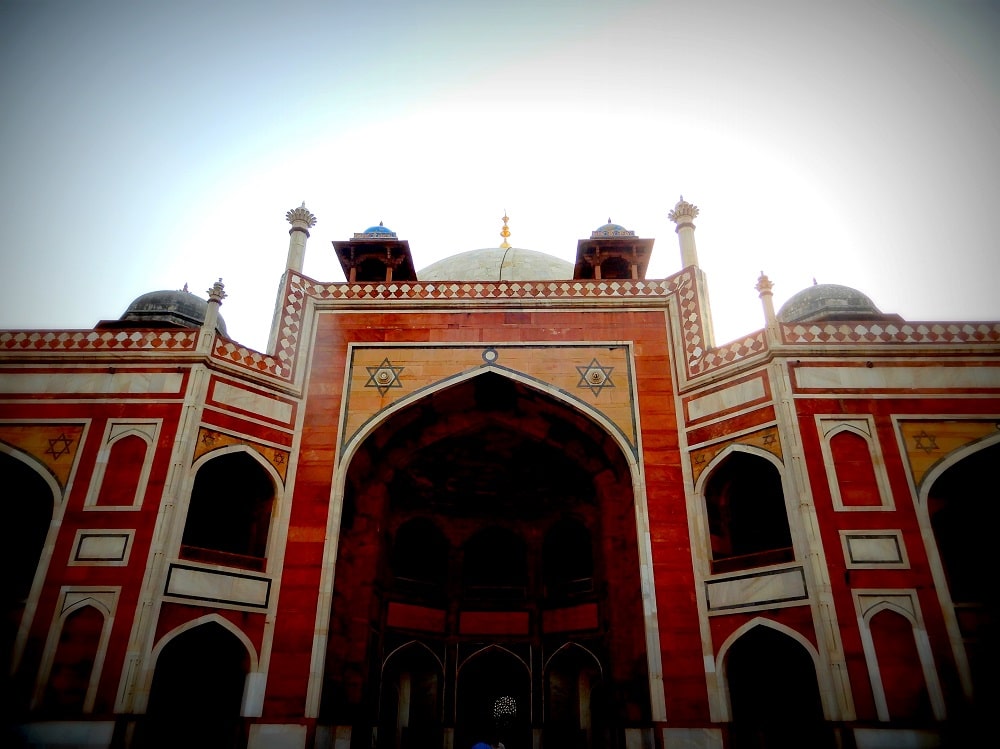 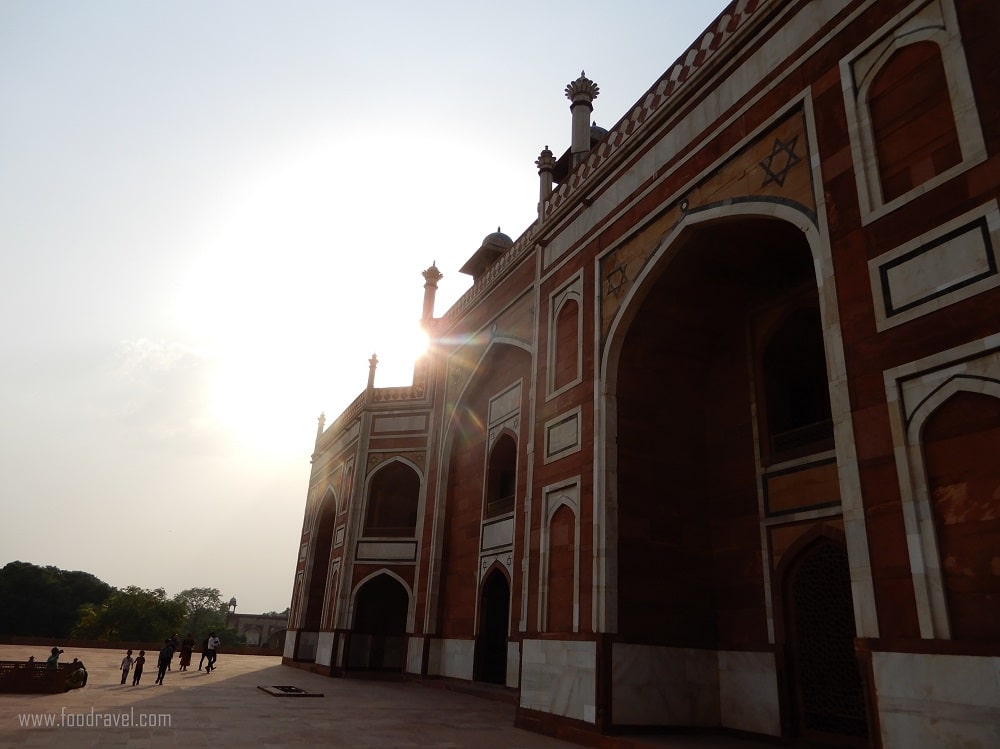 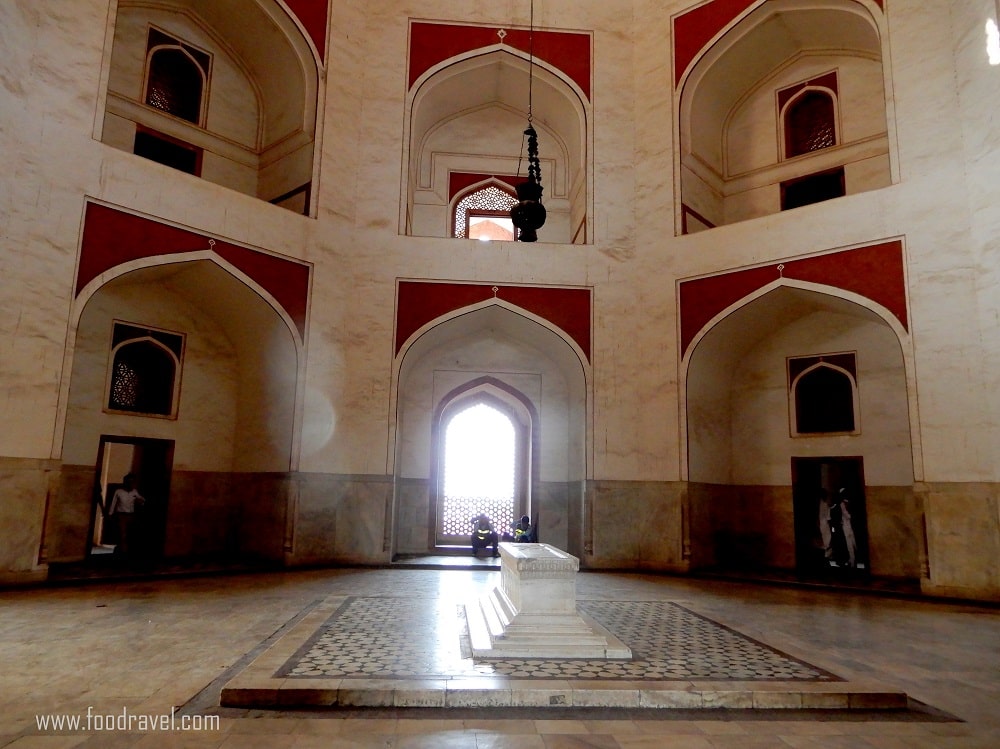 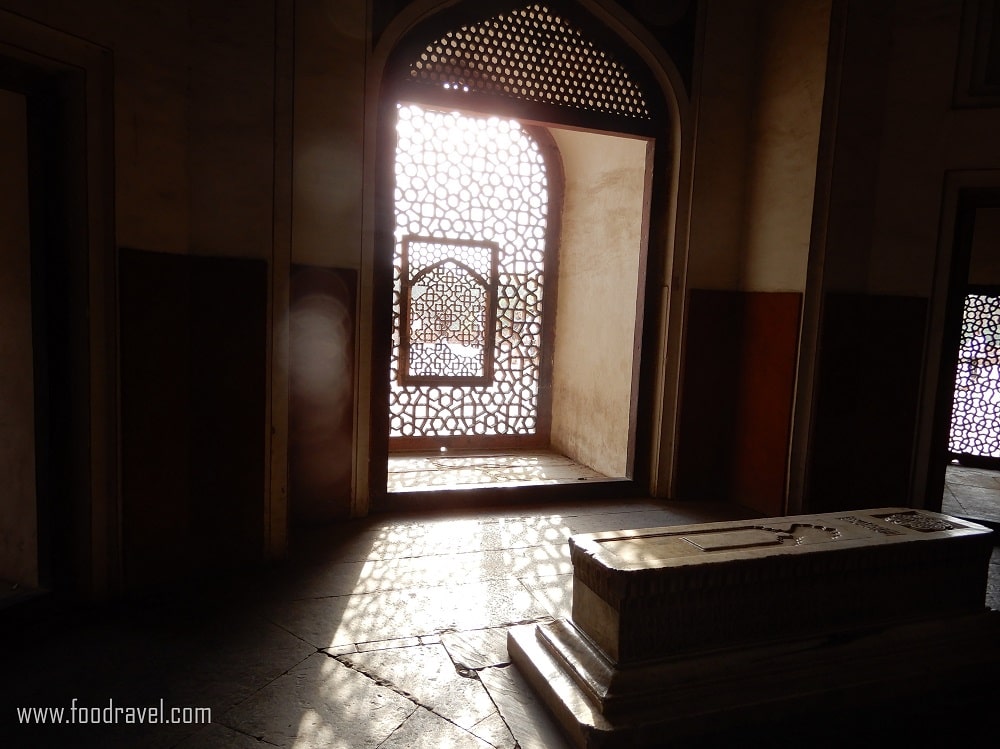 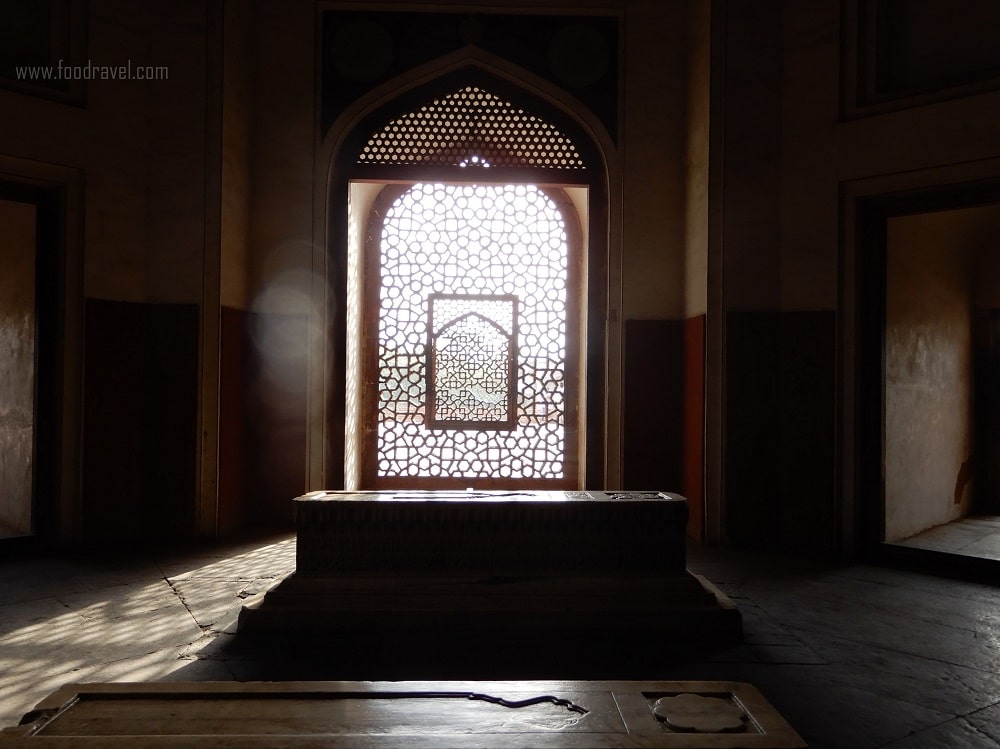 The architecture of Humayun’s Tomb Delhi

The tomb was designed by Mirak Mirza Ghiyas. He was brought here from Herat (the third-largest city of Afghanistan). He was a fine designer who had designed many buildings in his city, also in Bukhara. The tomb is designed in Persian architecture style. Unfortunately, he died and couldn’t complete the work. So, his son Sayyed Muhammad ibn Mirak Ghiyathuddin took over the work and finished it in 1571. The tomb was surrounded by Charbagh, four-square gardens, which were spread in more than 12 hectares. But it got reduced in later years. Agra was made the capital of India in 1556 and the whole attention was focused on Agra leaving Delhi. By the time it was the 18th century, people started to reside around the tomb and the lush green gardens turned into vegetable gardens of the people living there. When Bahadur Shah Zafar was caught in the 1857 Indian Rebellion, along with the premises, the British completely captured Delhi. After that, the Mughal gardens were then made into English gardens. But later on in the 20th Century, Lord Curzon, the then Viceroy of India, ordered to restore the gardens in the same Mughal design during a restoration project.

India experienced the Persian and Central Asian styles of architecture and design during Mughal and Turkish regimes. This started with the Turkish Slave Dynasty. Qutub Minar was built during their regime. If we look at the monuments built during the Mughal Dynasty in the Delhi Sultanate period, we will find a combination of white marble and red sandstone. Humayun’s Tomb Delhi is believed to be the inspiration behind the world-famous mesmerizingly beautiful Taj Mahal.

The tomb hits 47 meters in height and has a width of 91 meters. This was the first building in India that used a Persian double dome on a high neck drum which has a measurement of 42.5 meters. The same is topped by 6 meters high brass finial ending in a crescent. This is very commonly seen in Timurid tombs. 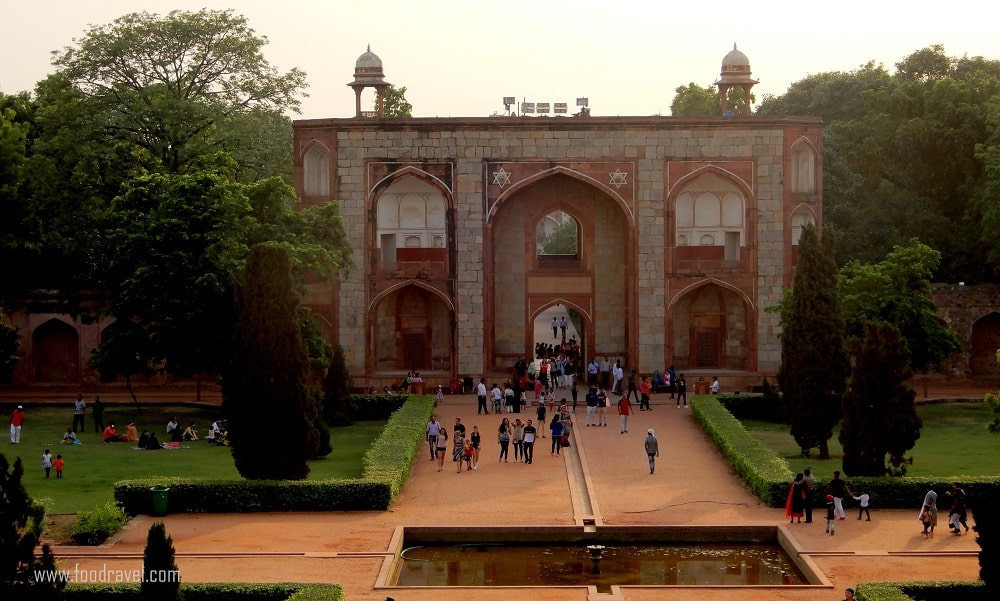 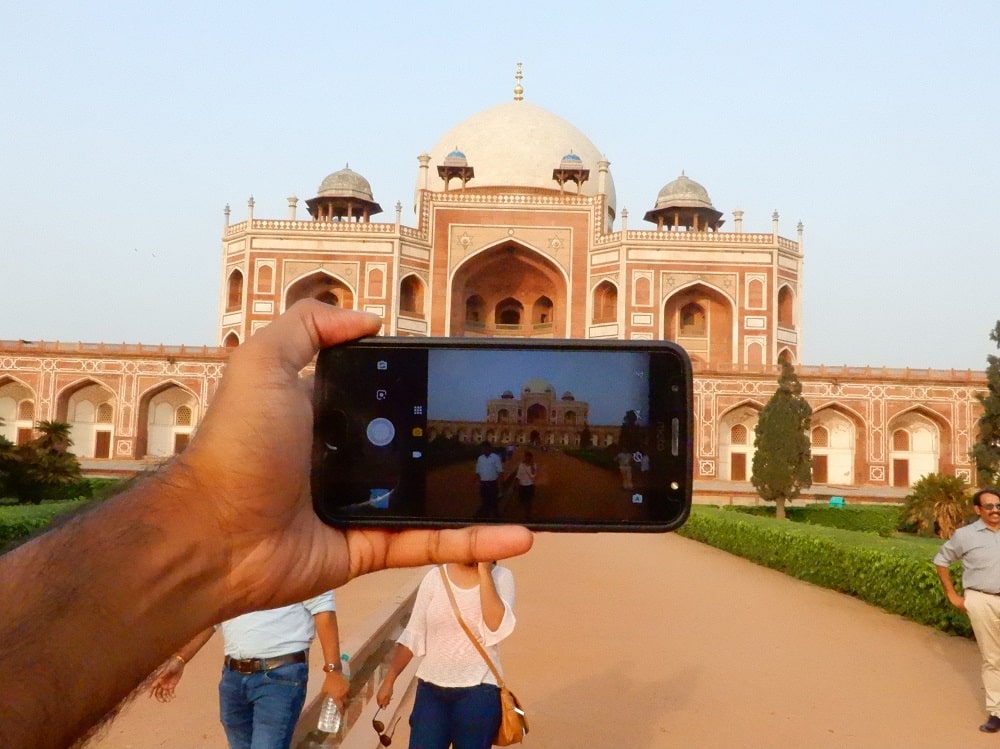 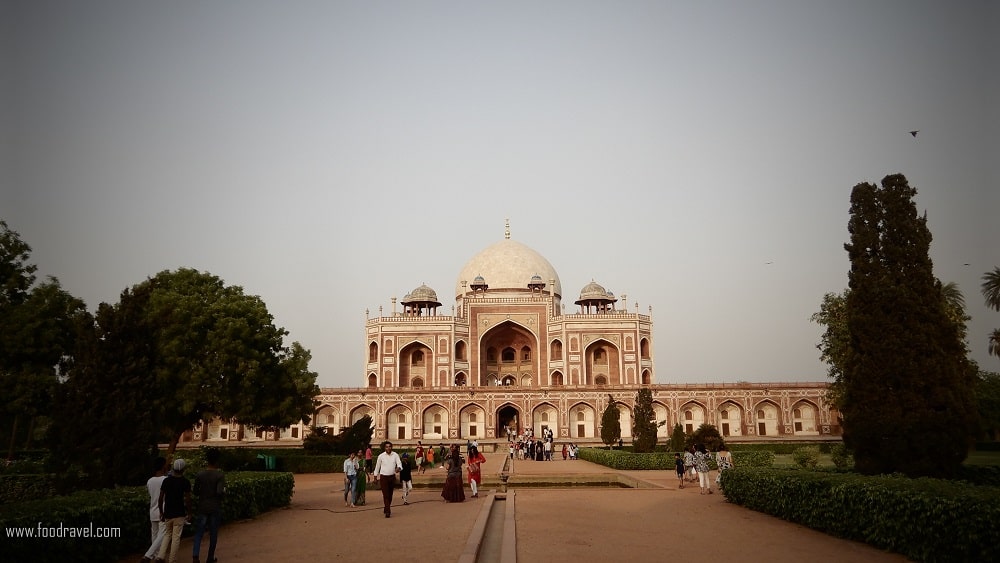 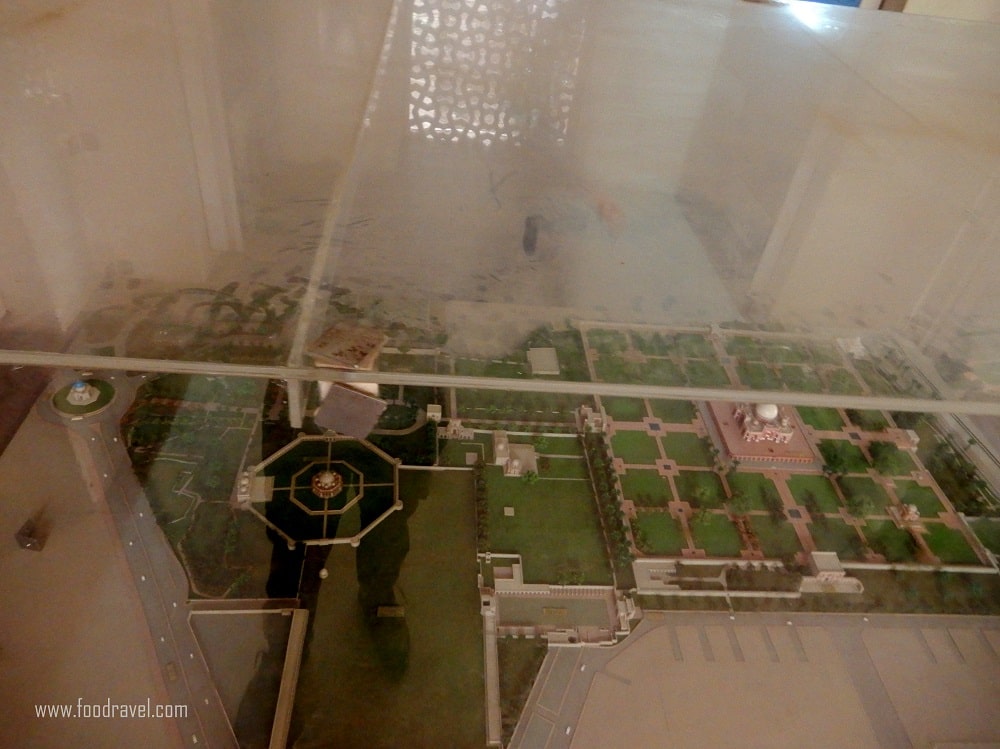 Mosque of Isa Khan and Tomb

When you first enter the main premises, on the right side you have Isa Khan Niyazi’s Tomb. It was built during 1547-48 AD. He was an Afghan noble who served in the court of Sher Shah Suri and also fought against Mughals. This is an octagonal tomb and is located in the octagonal garden. The entire family of Isa Khan is buried here. This tomb clearly resembles the tombs of the Sur Dynasty made in Lodhi Gardens. 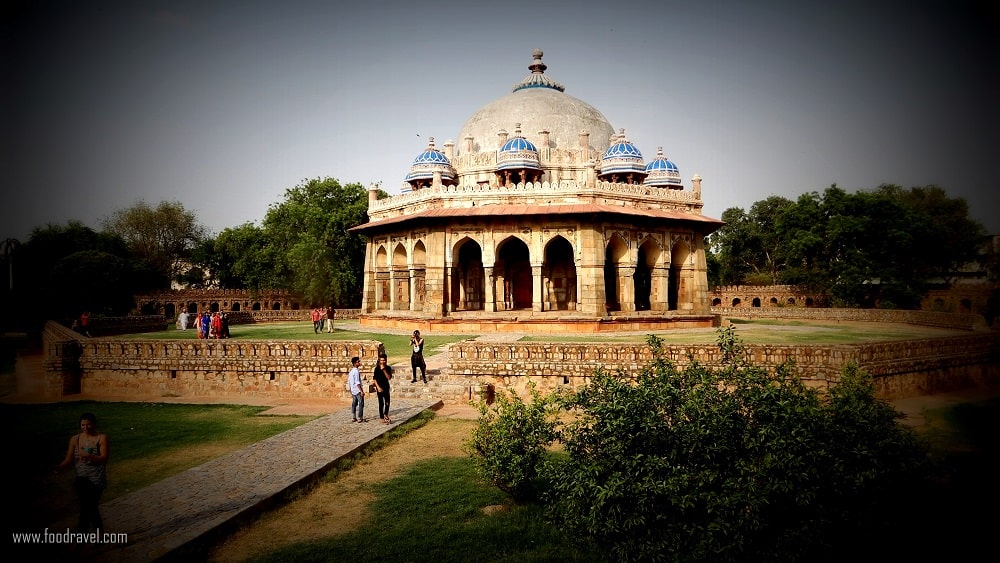 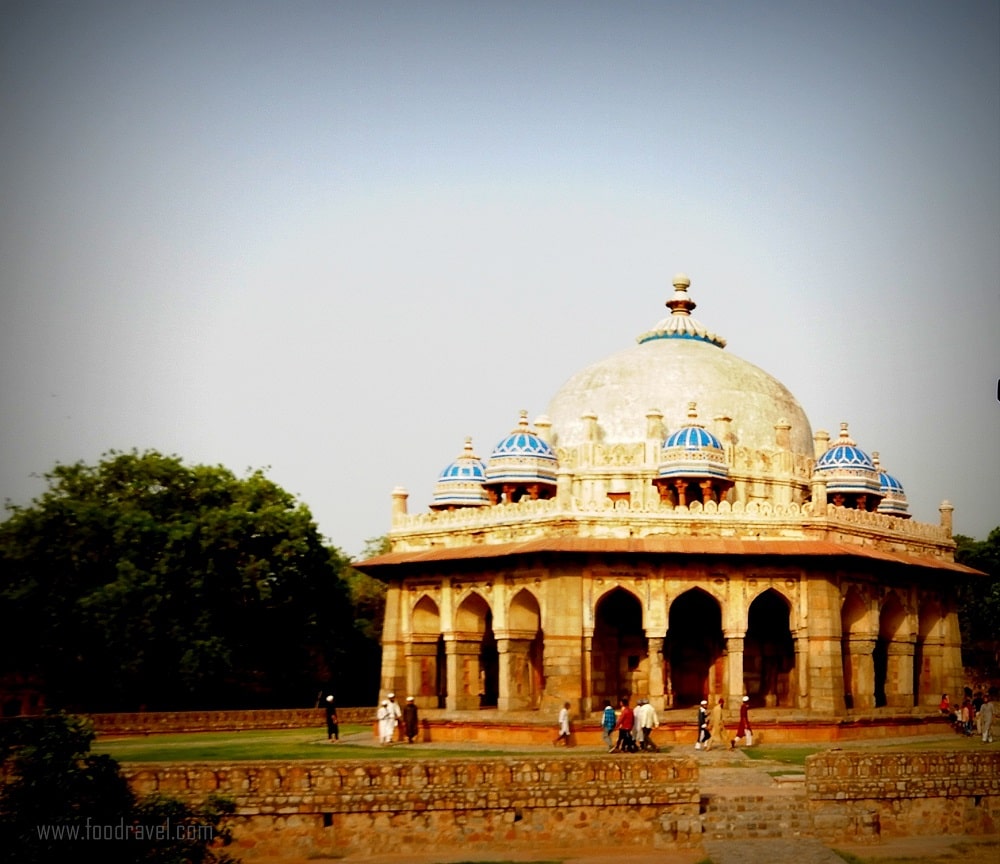 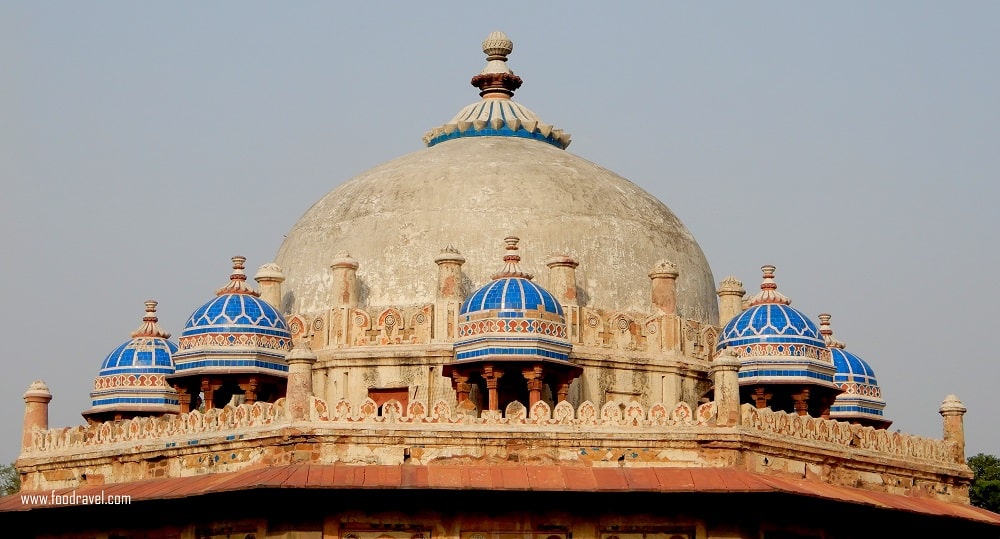 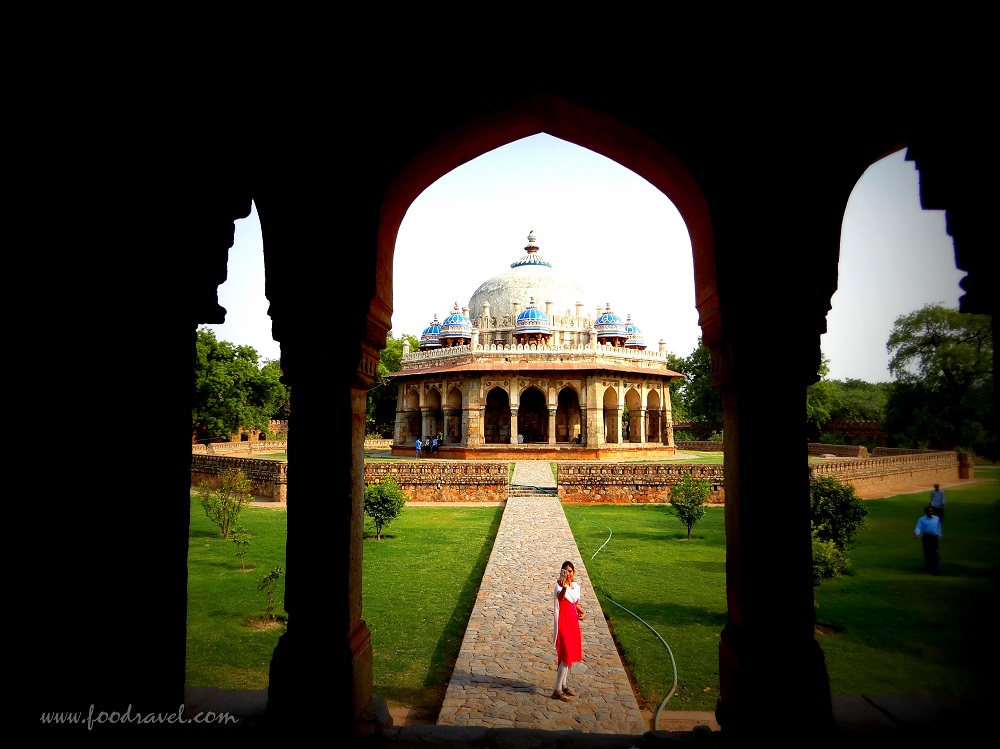 This tomb belongs to a nobleman in Akbar’s court. There is a marble grave in the tomb from 1566 – 67. Looking at the construction and other parameters, the mosque itself can be related to the same time.

The tomb is situated in the center of Char Bagh which has an area of 30 acres. The garden made in Persian style shows quadrilateral symmetry. This was the first tomb to be built in such a design in South Asia.

Nila Gumbad or Nila Burj is located outside the complex boundary. This has been named Nila Gumbad (Blue Dome) due to the blue glazed tiles used in it. The son of Bairam Khan, Adbul Rahim Khan – I – Khasa built this dome for his servant Miyan Fahim. Fahim grew up with Rahim’s son and died along with his son Feroze Khan while fighting against the rebellion of Mahabat Khan (Mughal Emperor) in 1625/26. This happened during the rule of Jahangir.

When you enter the main complex of the tomb from Westside, you first enter Bu Halima’s Garden. Not much is mentioned about her in history and hence we lack knowledge.

Arab Sarai is built adjacent to the Afsarwala mosque. It was built by Bega Begum during 1560 – 61. It is said to be built for the craftsmen who used to come here for the purpose of construction.

It is considered to be the residence of the famous Delhi saint Nizamuddin Auliya (1325AD). This is located outside the complex.

Both the organization worked on the on-going project of restoration of Humayun’s Tomb Delhi in 2009. They removed a thick cement concrete layer from the roof. This layer had been putting pressure of almost 1,102 tons on the entire structure. This layer was put here in the 1920s to avoid water seepage. So, a new layer was built whenever there was leakage and it reached 40CM.

How to reach Humayun’s Tomb Delhi?

Humayun’s Tomb Delhi is a famous tourist location and is easily accessible. The nearest metro station to the tomb is JLN Stadium or if you are on Yellow line metro station, you can get down at Jor Bagh metro station and from there you can hire a cab or auto-rickshaw.

So, this was my visit to Humayun’s Tomb Delhi. I hope you enjoyed it. Do share your journey and some beautiful photographs to get featured here.

ancient sites in delhiDelhiDelhi HeritageHumayun’s Tomb Delhiplaces to visit in delhiTombs of Delhi
Prev post Things You Don’t Know About Qutub Minar - A Photo Walk of World's Tallest Minaret
Next post Interesting Facts about Agrasen Ki Baoli – Is it really a haunted place in Delhi?