Road to Rishikesh Campsite – Camping by the Riverside

After getting refreshed and energized at the rest house, we packed and came out.  The cab was waiting for us.  We all four got in. There were already two people inside including the driver. I have travel sickness and I had to vomit on the way. Once we reached our destination, I drank lemonade to calm myself. We moved to our campsite along with a guy who led us to the place. This was really going to be a lifetime experience for me. We were heading on the Road to Rishikesh Campsite.

We were given one tent, numbered 5. This tent had three folding beds properly adjusted in the space. We were four and one more bed, thus we asked the guy there with whom we came here. He assured that he would give one at night. We got into our tent and changed clothes. We came out to enjoy the mesmerizing view of nature. Huge cliffs and eye-soothing greeneries, long trees, water flowing before us, this all was so amazing that I can’t find words to describe the beauty of this place. According to Lonely Planet, Rishikesh is among the most favorite tourist destinations for foreigners in India. The Road to Rishikesh Campsite gave me some everlasting memories. 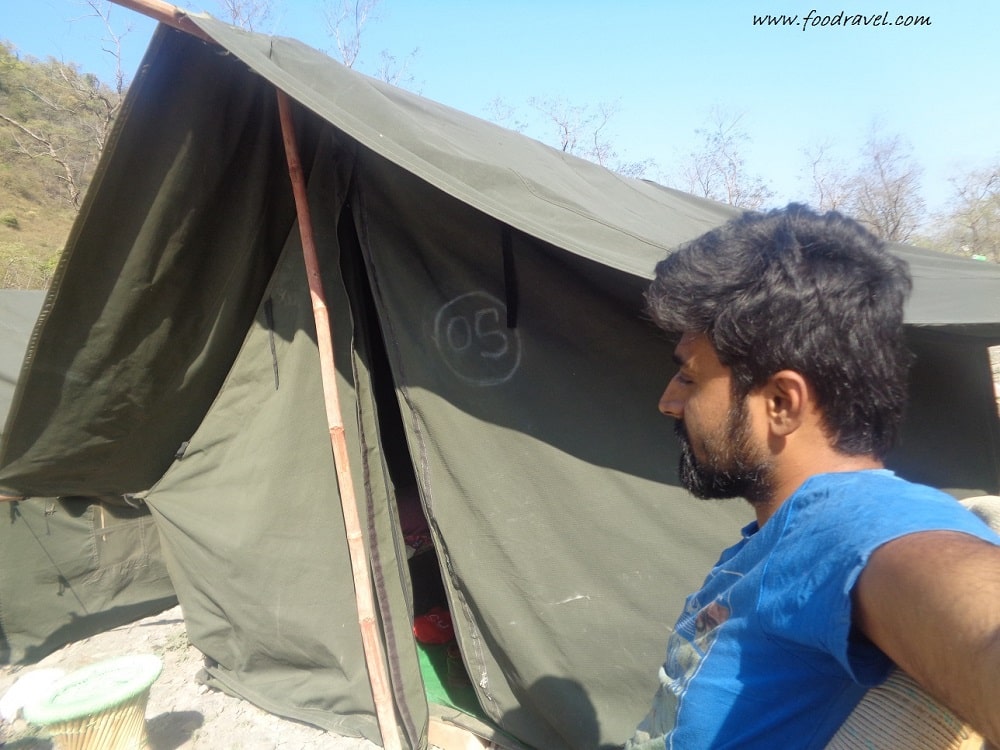 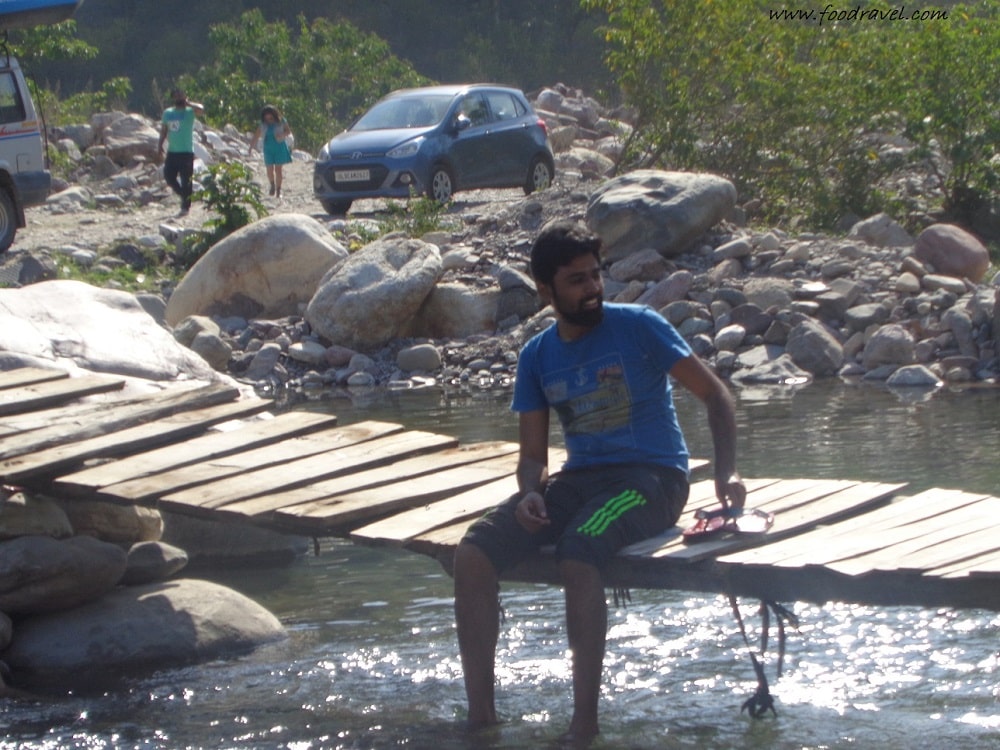 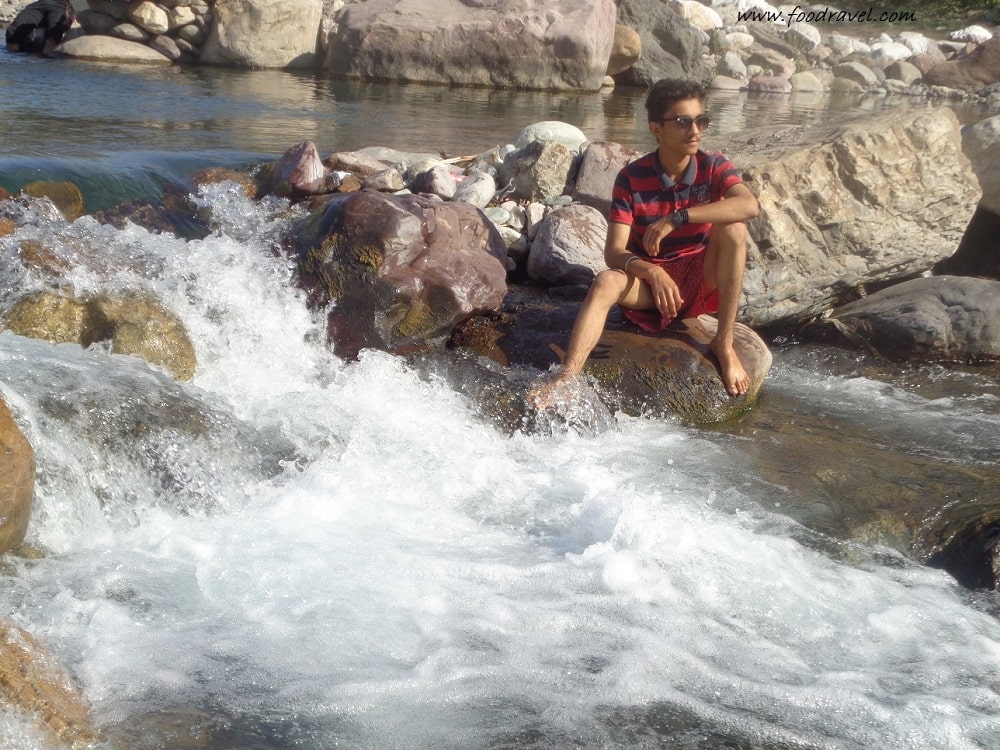 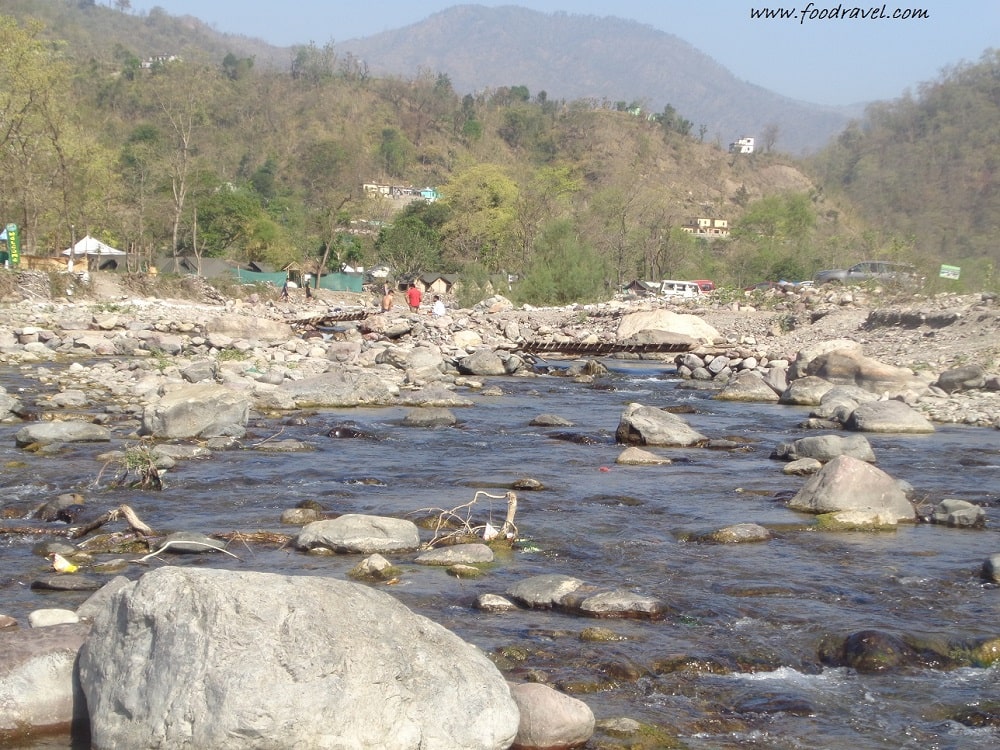 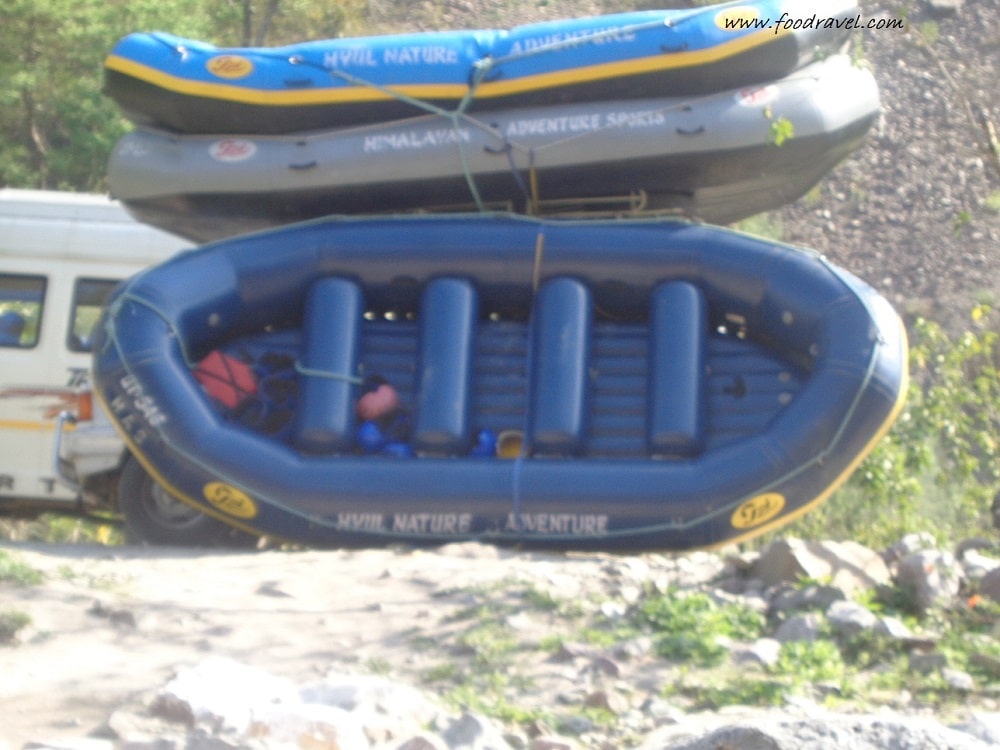 After having breakfast which included curd, aloo parantha, tea, bread, and butter, we roamed around the place to explore more. There was space for playing volleyball and Bhupender and Rohan tried their hands for a while. While I and Tanuj sat under an open tent and started talking. We had only two pairs of slippers and only two of us could move around while two of us had to sit. It was hot there too as the sun was high on the top showering its warm rays straight on the ground. I again needed to drink lemon water or maybe shikanji. But at this place away from the city, it was kind of hard to find one such place. However, there were a few on the road above. After a while, we finally spotted a man selling some sort of cold shikanji (I don’t know what it was, all green and chilled). We all moved to his cart, I and Tanuj barefoot. And we asked him to offer four glass of whatever he had. The price which he told was Rs40 per. Well, this price was somewhat high for this drink. Tanuj bargained and made it Rs. 30. The price may be high but whatever it was, I felt some relief, I got more ice pieces into my glass and drank. The whole body got some coolness. 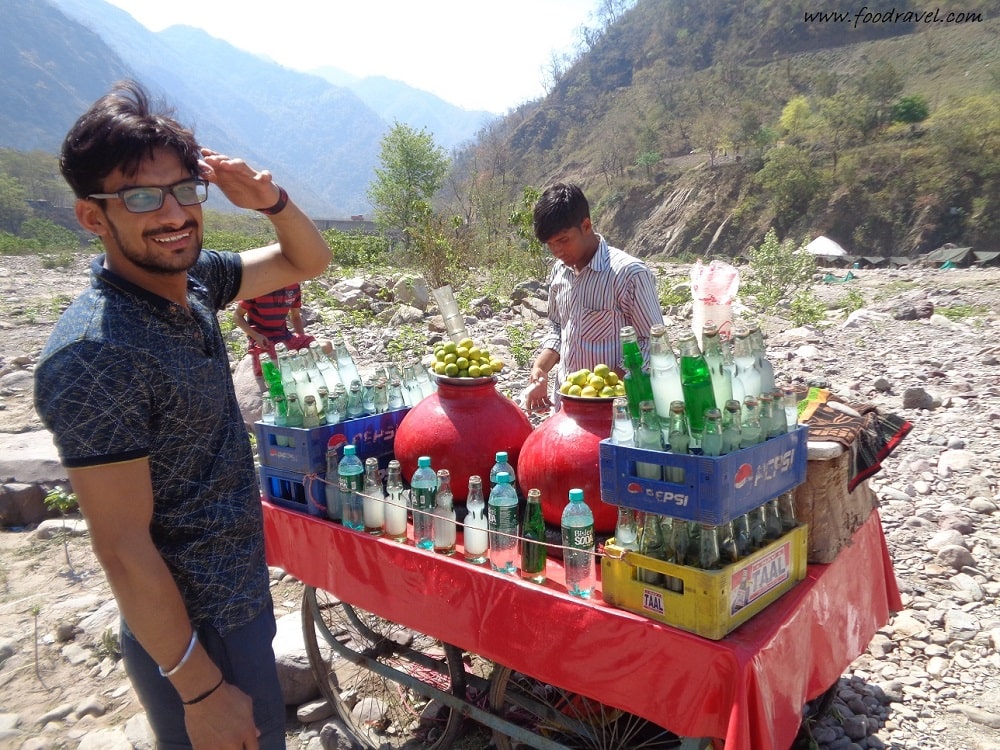 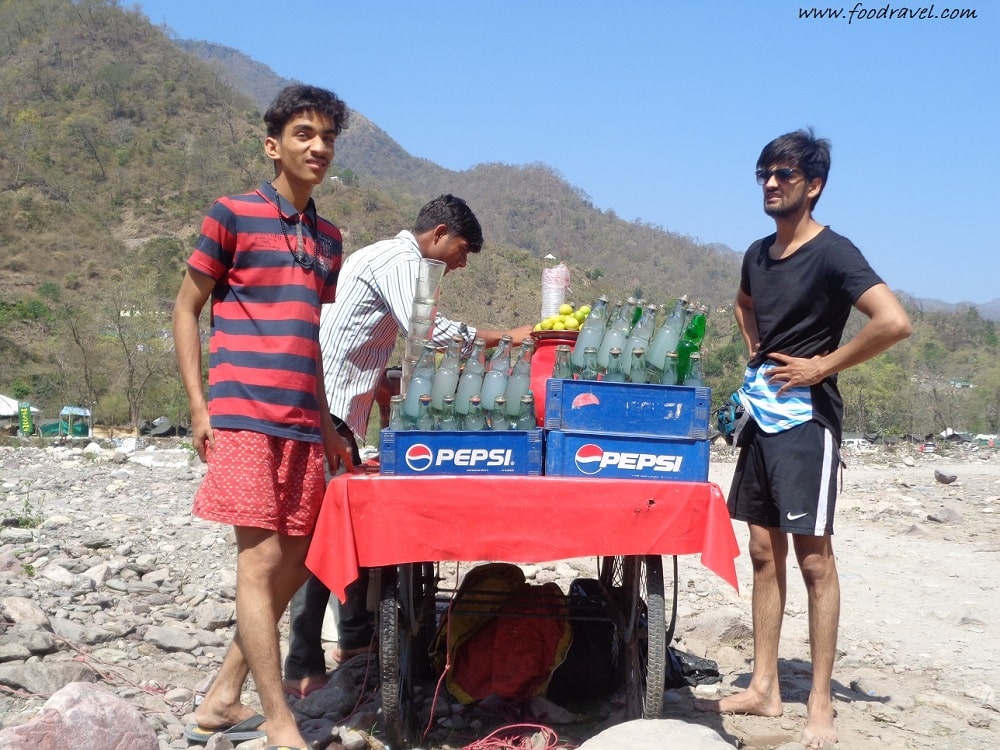 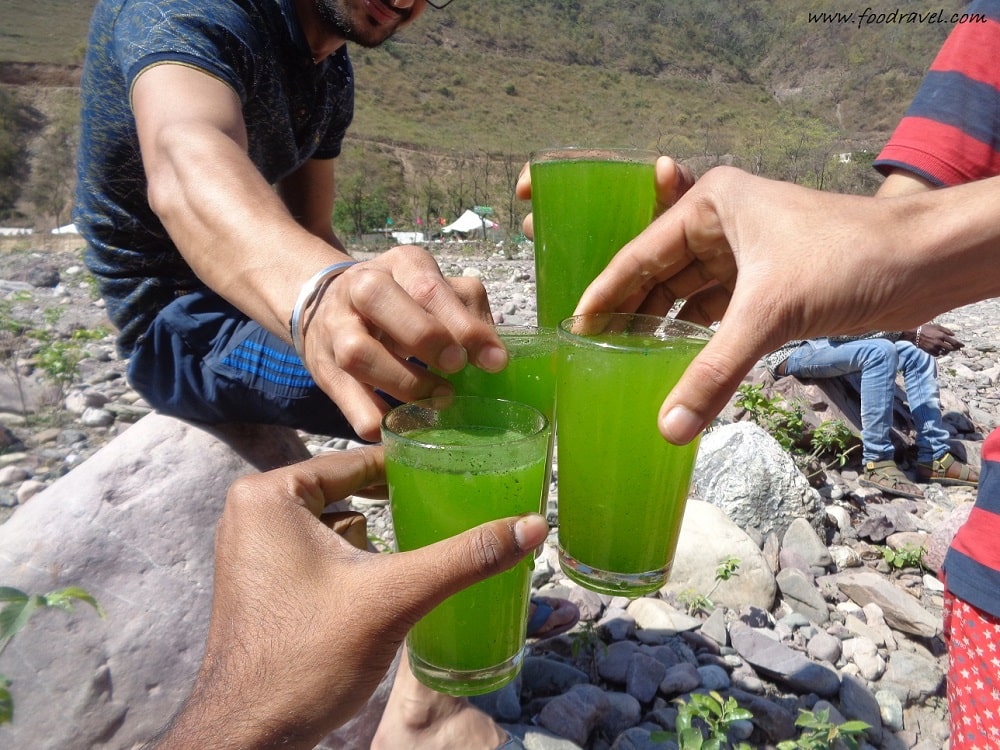 We were waiting for our turn to rafting. Everyone was leaving. Only we were left. Tanuj asked the people at the campsite and we were told that our turn will also come. Tanuj called the guy twice whom we paid in the morning. We were literally frustrated to have such bad service. And we were losing our patience as others were leaving for rafting.  Meanwhile, we utilized our time and energy in having fun at the bank of the river. There was a small wooden bridge of more around 15ft which joined the landmass separated by the river. We sat on it, got some clicks. We sang some songs. We kept on sitting on it for long, with our legs hanging in the cold water. The water was really cold enough to give chills. Rohan dived into the water. This was my first ever water experience there. Before that, I never saw anything like this. I don’t even know about swimming.

After waiting enough, a man came to us and told that it was our time to leave for rafting. I got really excited to hear this. There was a cab, standing with a raft on its roof. But we were asked to walk to the rafting place. There were many others who were going to rafting with. Several boys and girls walking with us for rafting. With every step I was taking forward, with every breath I was taking, my mind and heart were getting thrilled just by the thought of rafting. I had only seen in movies. I was all set to get an adrenaline rush. The journey from Road to Rishikesh Campsite led me to the river rafting in Rishikesh.