Parle G has become the undisputed leader among the biscuits brands in India. In this post, we will have a look at some basics of how our most favorite product is prepared before it reaches our hands. Let us see how is Parle – G made in factories?

Following is the recipe of Parle – G biscuits.

Step by Step Process of how is Parle – G manufactured?

Following is the diagrammatic presentation of the manufacturing of Parle – G. The biscuit Parle – G is manufactured at Parle Products Ltd at Vile Parle. Parle buys raw material from its suppliers. The raw material is tested carefully in labs. This raw material is made up of sugar, wheat flour, partially hydrogenated edible veg oils, leavening agents, milk solids, invert syrups, salt emulsifiers, etc. which are listed above. This all raw material mixture is then fed into Stephan Mixture. It is a high power mixing machine that is made to mix the dough and other ingredients. From this machine, the mixture is then taken to a molder which is known as Rotary Moulder. This molder has around 260n cups which give the biscuit their famous familiar shape and the Parle – G impression embossed on every single biscuit.

Now the next step is to transfer the dough from the mold into an oven, which is 260 feet long at 340° C. The oven process is followed by the following steps:

Now, from the oven, the biscuits are transferred to a Cooling Conveyor, and the biscuits are allowed to cool down for around 6 to 7 minutes so that the remaining moisture may go dry. And that’s how there is an S Flow Layout in the manufacturing unit. 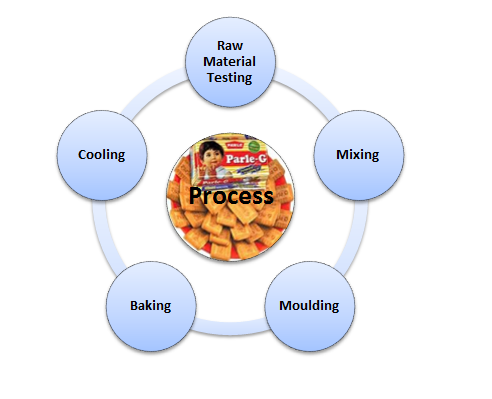 Click here to read about nutritional value in Parle G