Being a Haryanvi, I need a good diet once a day which means proper North Indian veg food. I mean I can go on without it but still if I feel I can get it with some efforts; I will choose to put efforts to find that sort of meal somewhere. And that’s what happened with me in Shimla. I was done with eating Maggi and other roadside snacks I knew I had to walk whole the day and I needed a good amount of energy to go on. Also, being on low on budget, I wasn’t very fascinated by visiting any fancy restaurants since I was done for them already. While looking for a proper North Indian restaurant on Mall Road, I reached Indian Coffee House Shimla and my soul bloomed like spring flowers. I took a long walk to find a budget-friendly proper North Indian food which I couldn’t find and then spotted Shimla’s Indian Coffee House or ICH just on the road.

Alongside the Mall Road and lower bazaar, you will find lots of cafes, restaurants, lots of non-vegetarian options. But I being a vegetarian, I had to deal with a great deal of trouble at dinner time when I strolled around to find a suitable place which was budget-friendly and served vegetarian options. It wasn’t like the Indian Coffee House was the only place for a vegetarian meal in Shimla. I am sure there would be more places to eat out. However, I was exhausted. Round the clock journey from ISBT Kashmiri Gate, and I had a cup of hot Maggi when I reached ISBT Shimla. And then after spending time in Kufri Zoo, I had another bowl of Maggi and that’s it. And then I visited Jakhoo Temple. So, overall my day’s proper diet was missing. 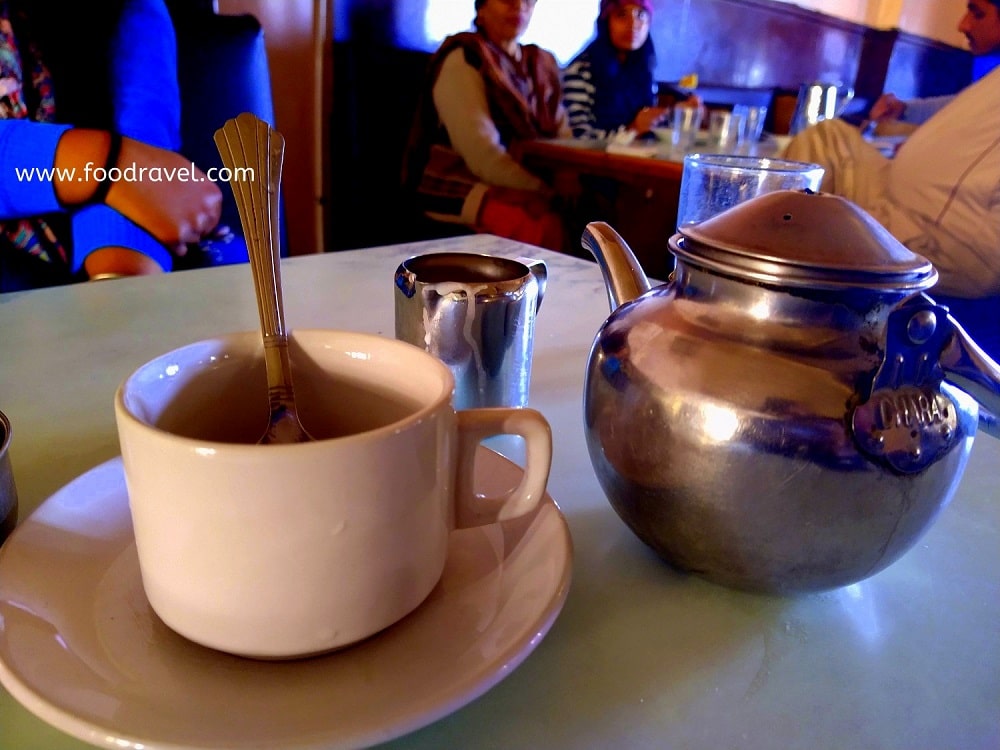 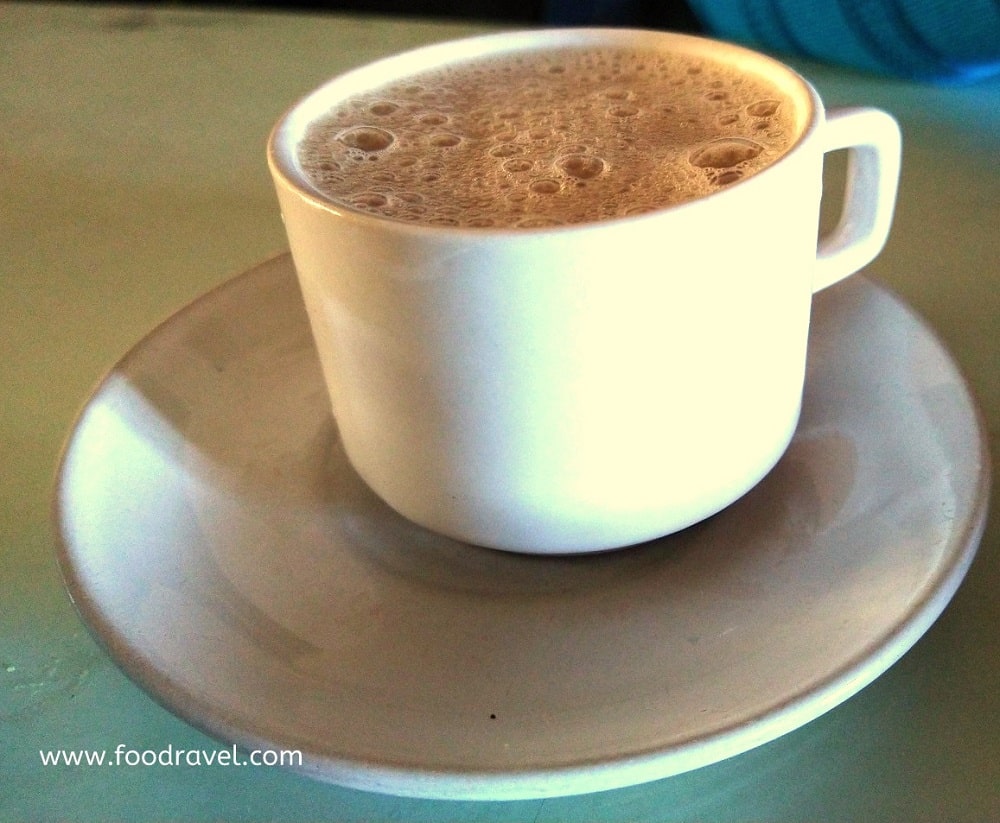 Indian Coffee House is one of the most famous places to eat in Shimla. Lots of known people have visited this eatery in Shimla including JL Nehru, MA Jinnah, Narendra Modi, LK Advani, Indira Gandhi, and Hamid Karzai, the former Afghanistan PM. ICH Shimla was opened in the year 1957. It is said that the founders of the Indian Coffee House in Shimla had to sell the jewelry of their wives.

This coffee house standing with pride at Shimla’s Mall Road has been able to survive amid the competition given by several global eateries.

I have been to ICH at other places as well. So the moment I saw it, I realized my hunt was over. As usual, Indian Coffee House Shimla was also crowded and had to wait for the order to be served. The iconic white uniform of the staff members, people sipping coffee or tea, chattering with each other, etc. is something which you will in almost every Indian Coffee House across India. When I entered, I felt like entering some 80s, 90s retro café which I had seen in movies. After spending sometime around the Ridge, I started to look for a nice place to eat. 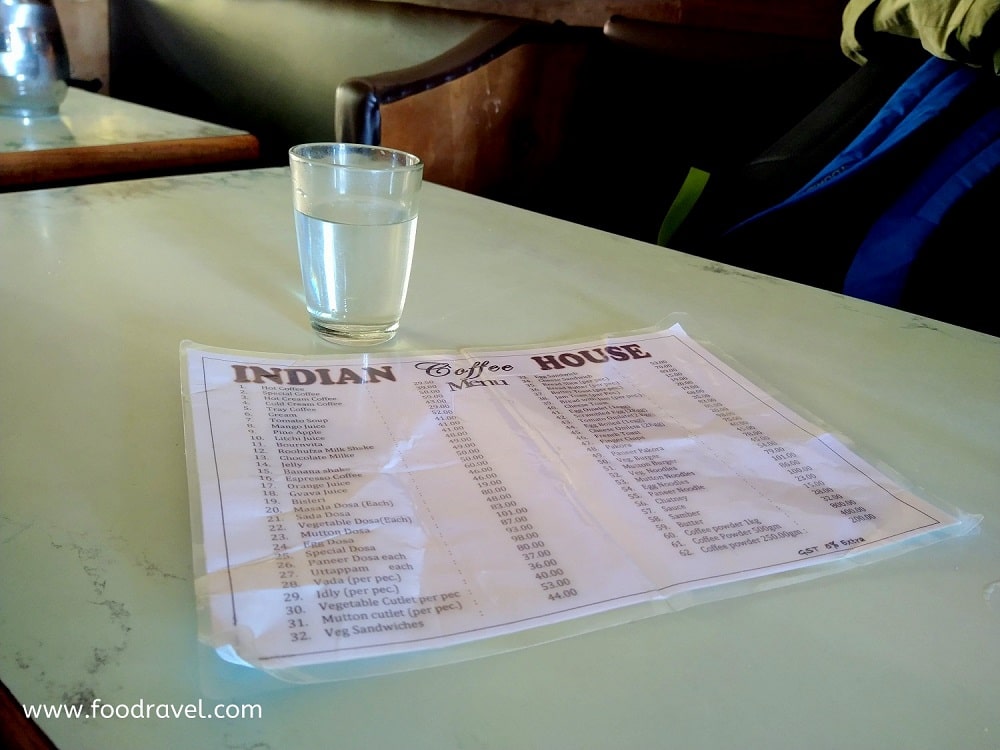 Before reaching ICH Shimla, I visited a couple of more restaurants and cafes in Shimla. Few of them were crowded and had no space to sit and few of them were not that satisfactory as per my requirements so I had to leave. Since it was around the year-end and the city was jam-packed. Traffic, tourists, and everything was just crowded. The hotel I booked was costly considering the facilities but I had no other options. Whenever you plan to travel unplanned, you have to deal with such problems. And I often travel like this, pack bags and leave. 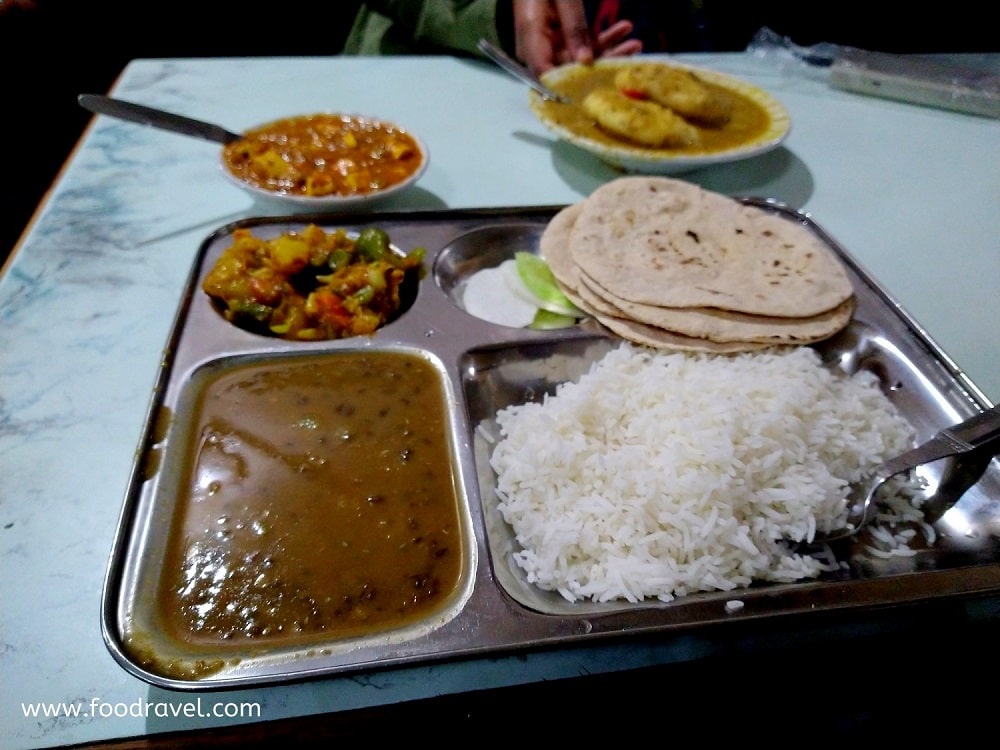 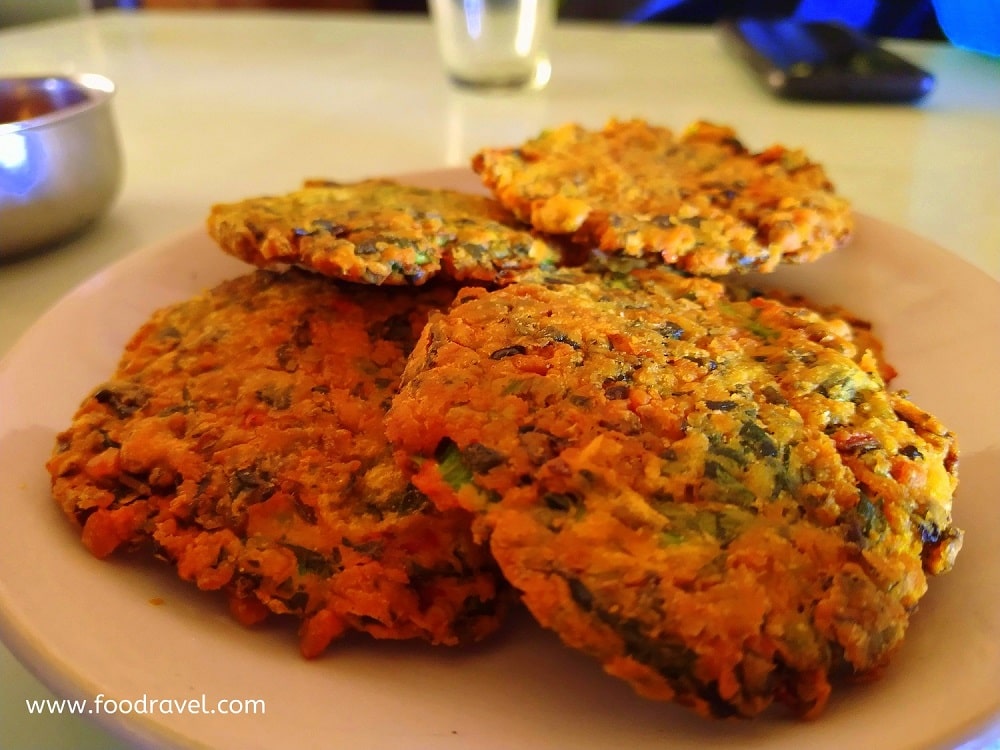 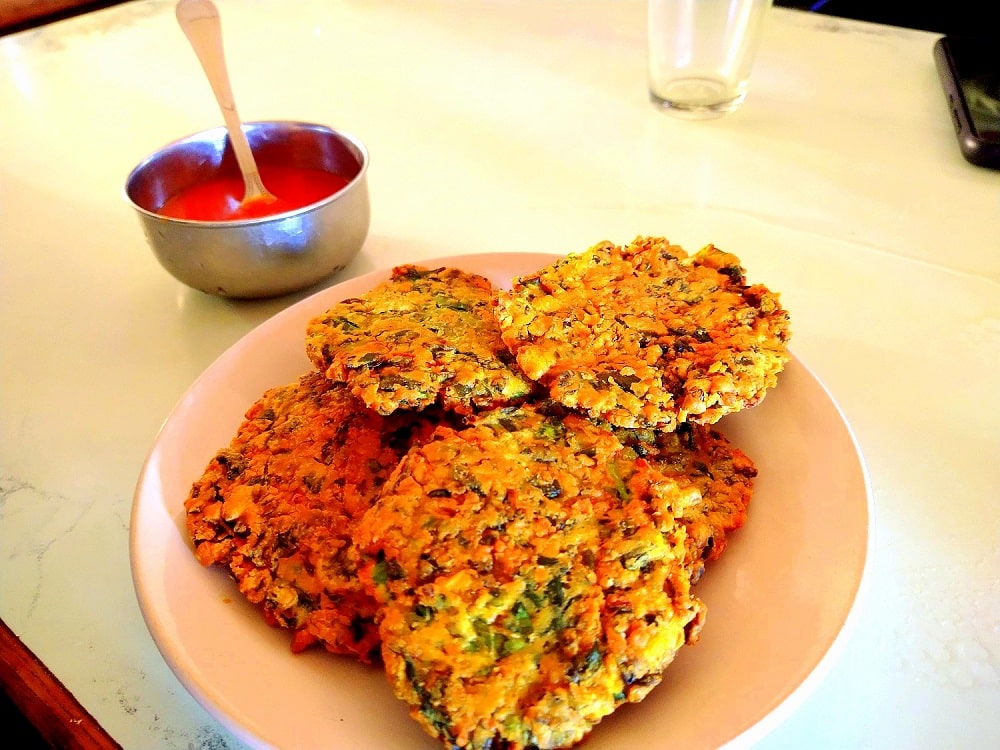 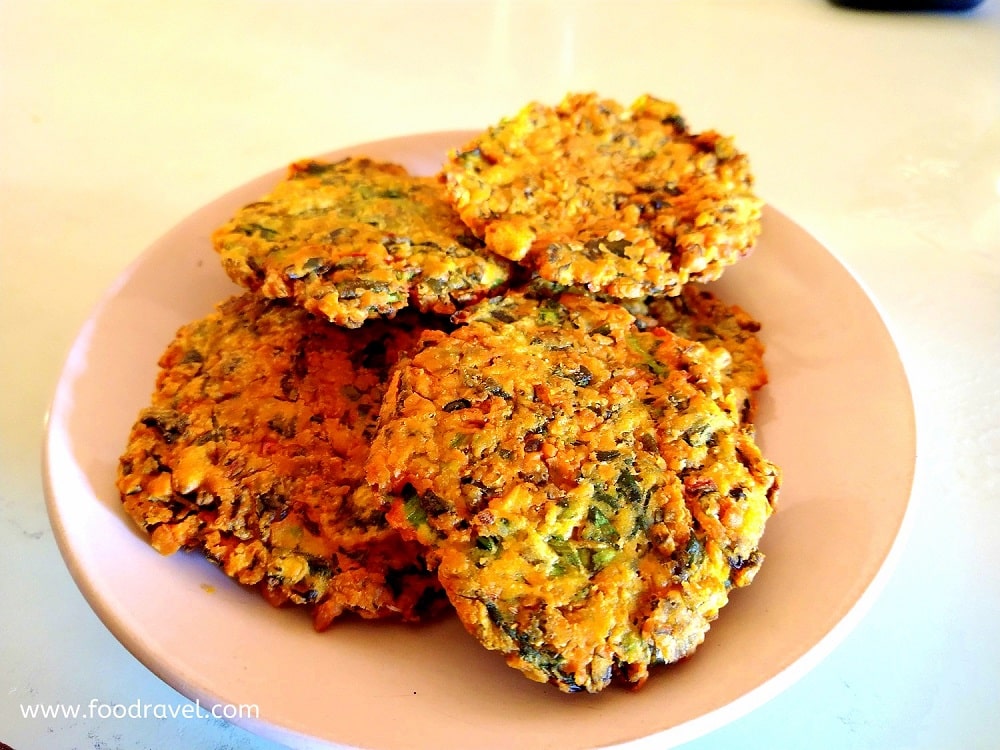 The veg thali I ordered for dinner came with two choices of veg, rice, salad, and chapati which was enough for me for dinner since it was something I had been missing for the whole day. The menu was not just limited to North Indian cuisine, but continental, South Indian as well and I was in no mood to try anything else other than this. I had a good dinner there though I have heard that ICH has lost its charm over the years. 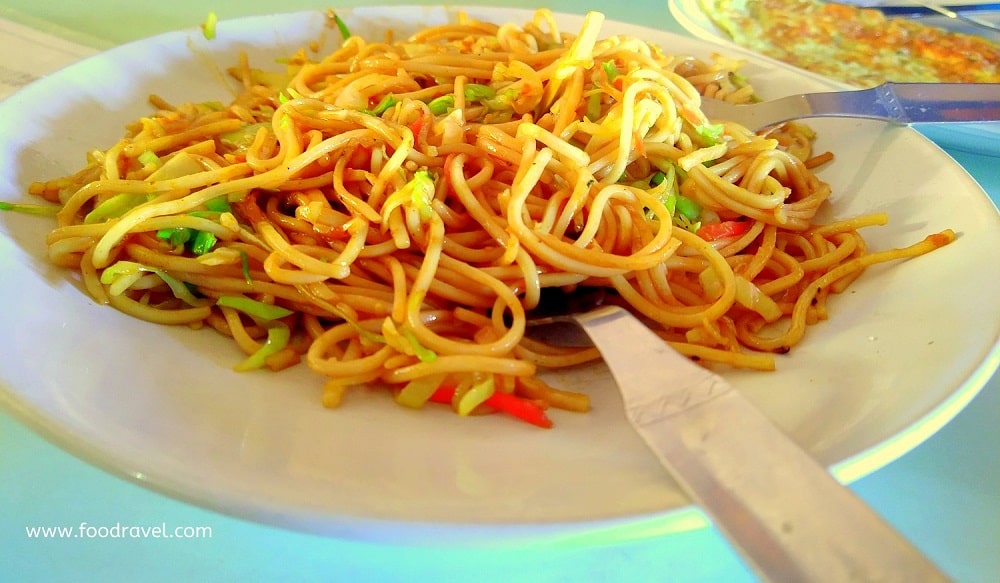 So, I had known where to reach for breakfast as well without getting distracted by anything else on the way. Thus, I woke up, took a shower, and checked out from the hotel. I straight away reached Indian Coffee House Shimla and ordered myself the breakfast. I asked for a veg sandwich, veg noodles coffee, and palak pakora. Well, the sandwich was something okay okay but that pakora was so amazing. I loved it so much that I had to order one more and then one more. It was flattened, it was spherical and it had a perfect combination of veggies, spices, and other things.

I was done with the crowd of Shimla and needed an escape. I came to Shimla at a very wrong time since it wasn’t any planned. Thus, I went to the bus stand and took a bus to Kasauli where I spent my next day.

cafe in shimlaIndian Coffee House Shimlarestaurant in shimlaShimlawhere to eat in Shimla
Prev post Things to do around Mall Road Shimla
Next post Why did I plan to visit Kasauli after visiting Shimla?