How has been the food in Rajasthan during my journey?

Travelling teaches you a lot. You need to adapt and adopt several things; you may like it or not but there is no option. And one of the biggest challenges that traveling brings for a guy like who is totally vegetarian and teetotaler, is the food.  I have weird food habits and I eat whenever I feel like it. Recently on my trip to Rajasthan,  I came across different cuisine.  The cuisine which I never seen before, though I belong to a place which has a mixed culture, from Haryana and Rajasthan since my hometown is Mahendergarh which is at the border of Rajasthan and we share good things from language, outfits to food. But the food in Rajasthan was something which I haven’t seen before. Why? Maybe I was never exposed to anything like this.

Moreover, this was my first time to visit Rajasthan this way. I have traveled to Jaipur but that’s the state capital and has a cuisine of every type. I have been to Bikaner and there too I didn’t experience anything different. But the food in Rajasthan was different when I visited villages during my trip. In my one week journey of Rajasthan, I visited, stayed, and tasted the local food. Well, that’s bliss if you get to taste the local cuisine. I faced a great deal of trouble when I was in Kathmandu since I couldn’t get proper North Indian food there. 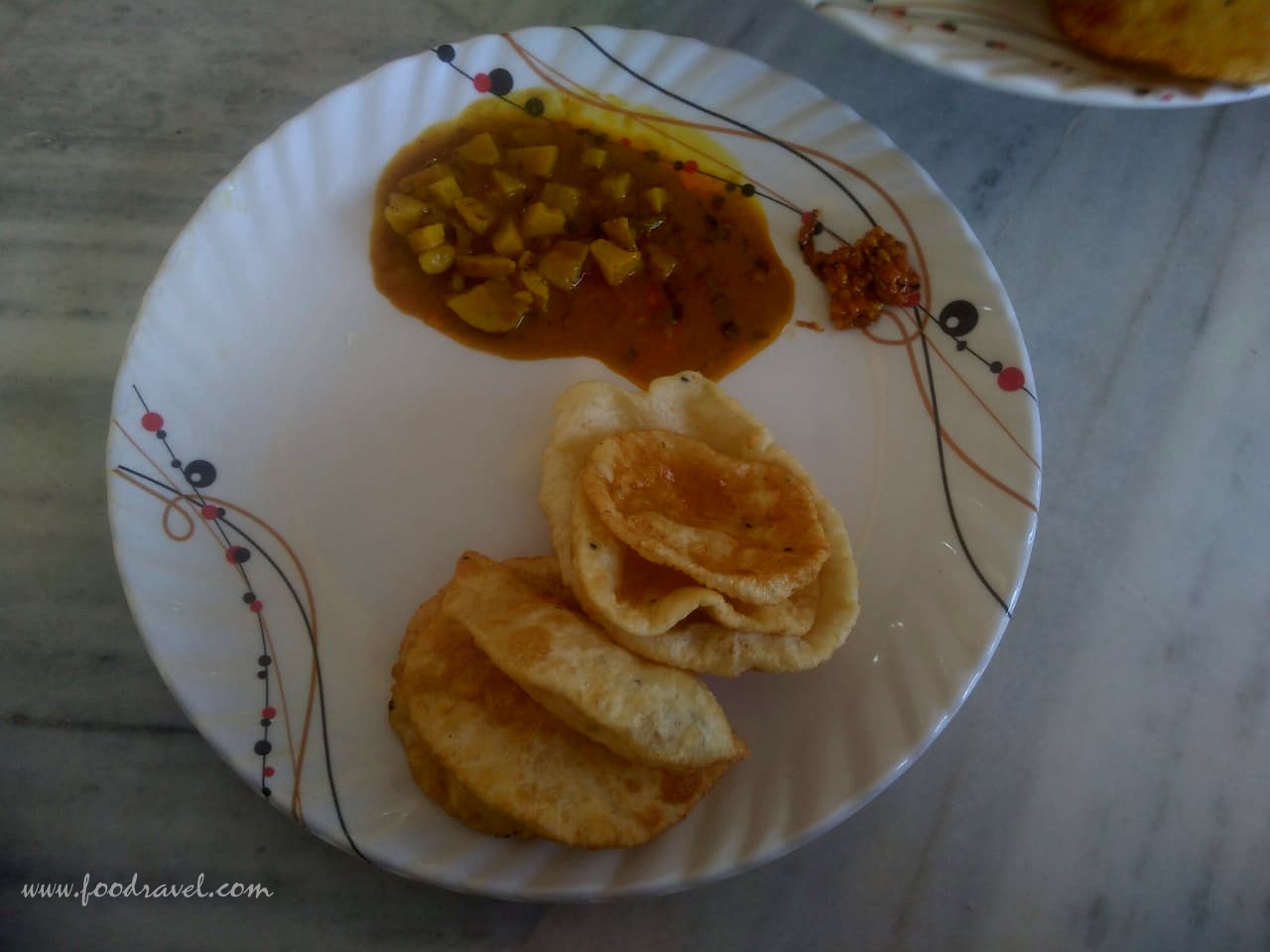 My first time experience with food in Rajasthan

We enjoy traveling but it brings its own list of challenges to deal with. Okay! So, there is a lot of fat added to food in Rajasthan. And I somehow avoid consuming fat in my normal diet. So, the very first day, the breakfast I had in Bikaner city was normal. It was puri and aloo ki sabzi with a sweet dish. When I reached Bap village, the cuisine got changed slightly. It was lots of ghee. Now I being a Haryanvi should love ghee since it’s a part of our regular diet. Oh yes! I love my rotis with ghee on them. But it is not easy for me to consume so much of it. That was the first challenge of eating food in Rajasthan. The village people were so sweet and the food they cooked was delicious. It was perhaps their love that made the food taste lovelier and scrumptious. 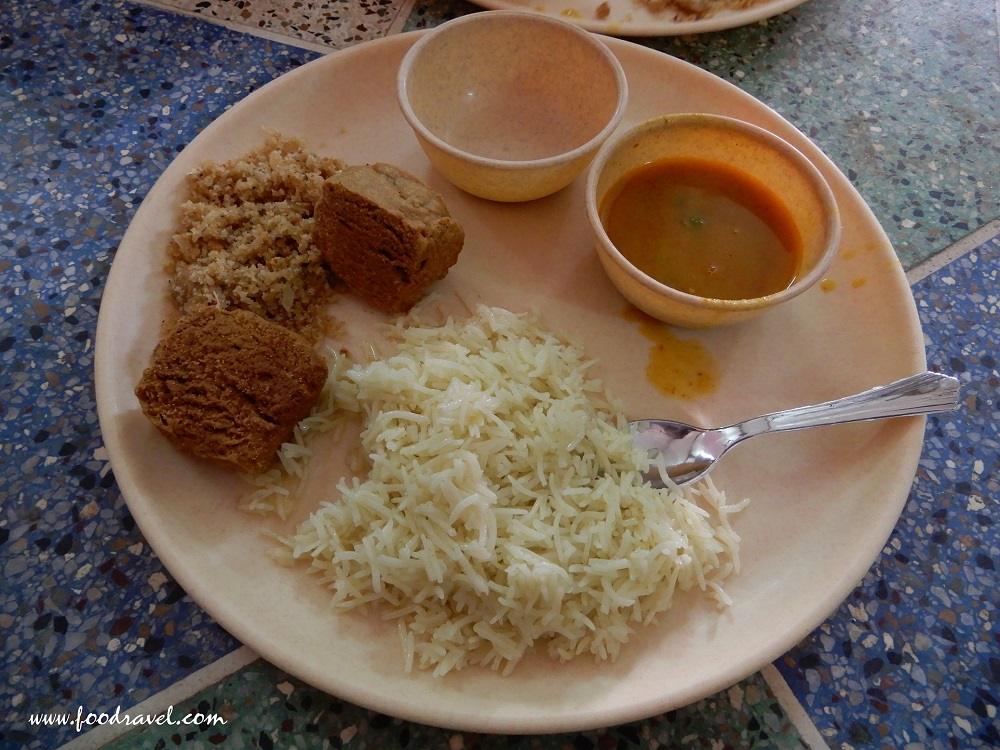 The breakfast at Bap village was of tea and pakoda. Here again, I don’t drink tea also so that was again a problem. I had to do with pakoda only. So, the lunch was Daal baati choorma, steamed rice, and daal. The rice was long-grained and tasted amazing. Daal baat choorma was such deliciousness that I still feel the flavor in my memories. Wonderful food in Rajasthan this time!

So from Bap, we headed to Nachna village.  And there I tried something really different. For the first time, I tried aloe vera ki sabzi. Well, that was something I couldn’t appreciate that much since it was my first, and may I could start liking it if I try it more again. But the first time was obviously difficult. Then the lunch was quite unusual. We had veg I don’t know even the name. We had Kabuli rice which was actually similar to veg biryani. The veg gravy tasted like Manchurian and there were small balls like gulab jamun. Well, later on, I came to know people even have gulab jamun veg as food in Rajasthan. The surprising thing is that it is veg; not a sweet dish. 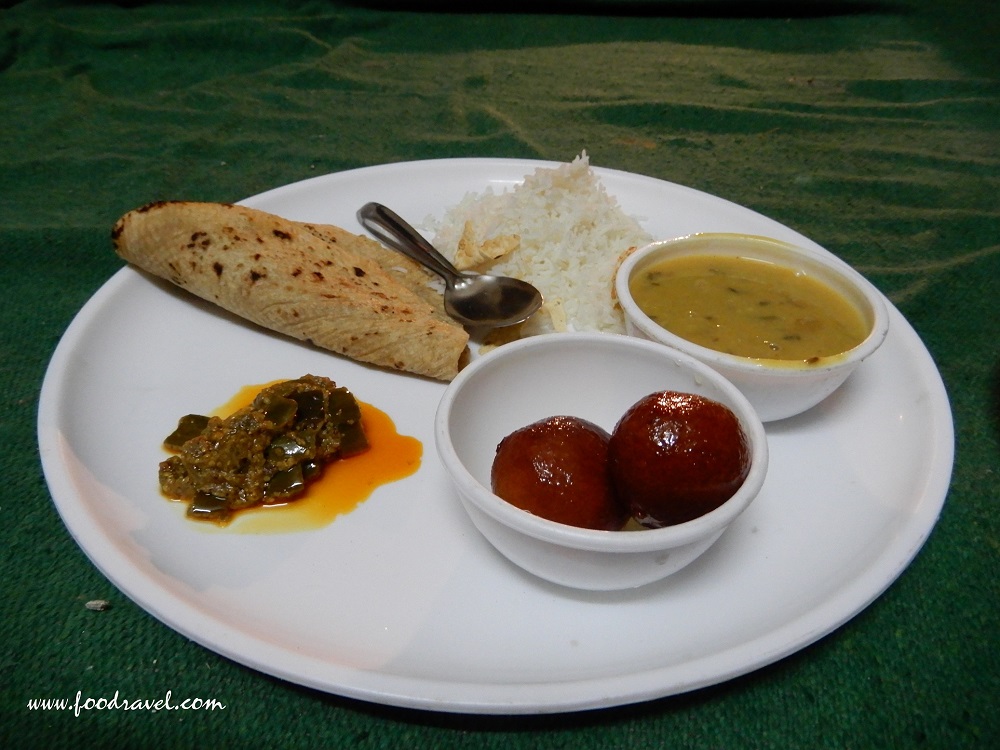 I even had dhokla, poha with namkeen in Jaisalmer which was totally different. As far as my knowledge is concerned, Dhokla belongs to Gujrat and Poha is from MP. So two different cuisines in one place in a different state. Interesting!

One of the best things about traveling is that you get to taste every time of cuisine which perhaps hard to imagine, staying at a place. I do face challenges considering my food habit, but yes it's worth exploring. This plate mixed of cuisines from two different states served in totally different geography caught my attention. The fourth day of my rajasthan journey, I reached Jaisalmer and there in breakfast I was served this. No doubt, it's always amazing to taste and explore cuisines like this. #food #foodphotography #FoodRavel #foodlover #foodblog #travel #nomad #globetrotter #gastronomy #travelblog #travelporn #travelgasm #foodgasm #foodgram #foodporn #rajasthan #travellove #foodie #wanderlust #nomad #roamer #foodjournal #breakfast #Indiancuisine #letseat #letstravel #solotravelling #travelalone #traveladdict #travelholic 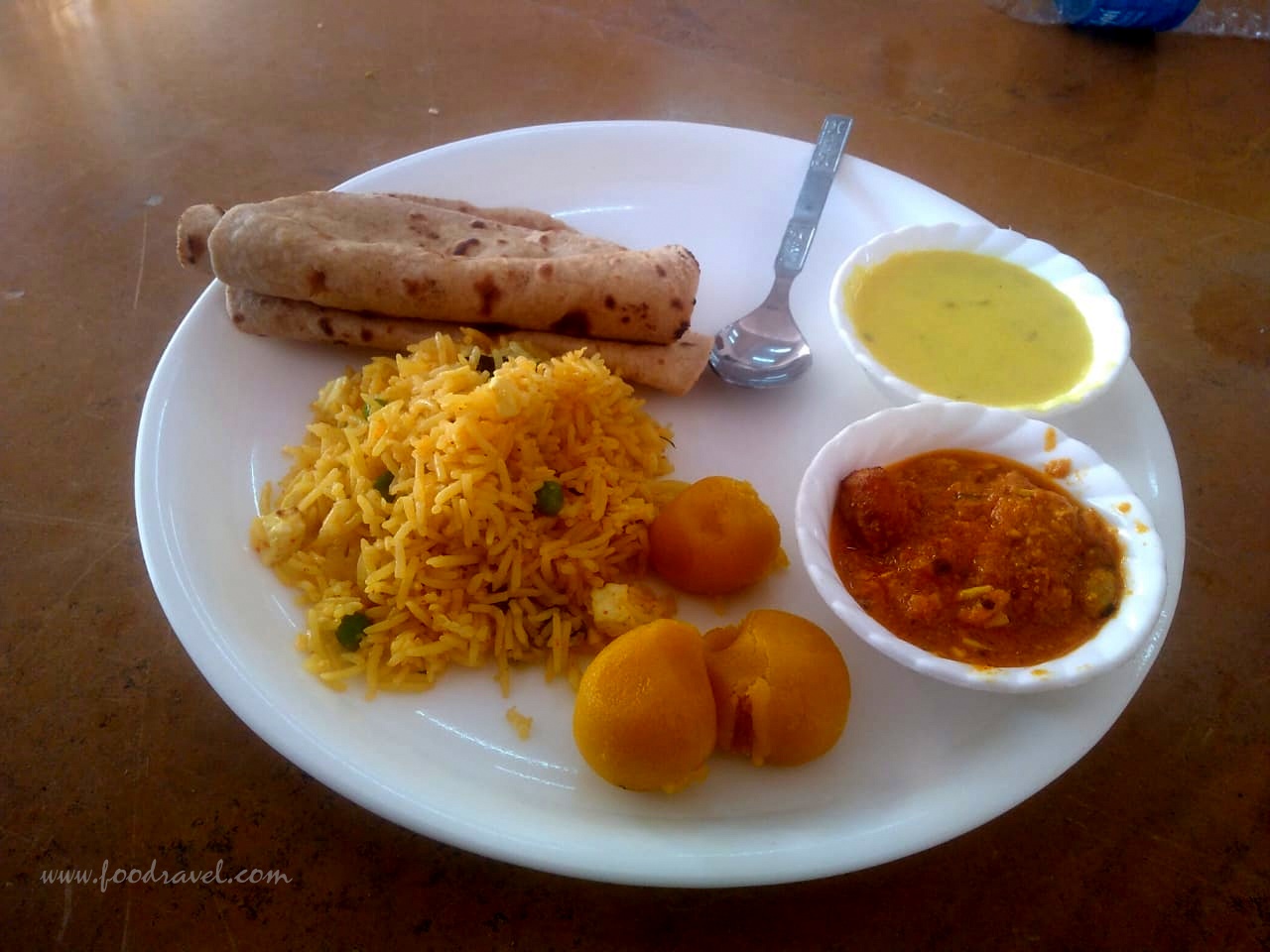 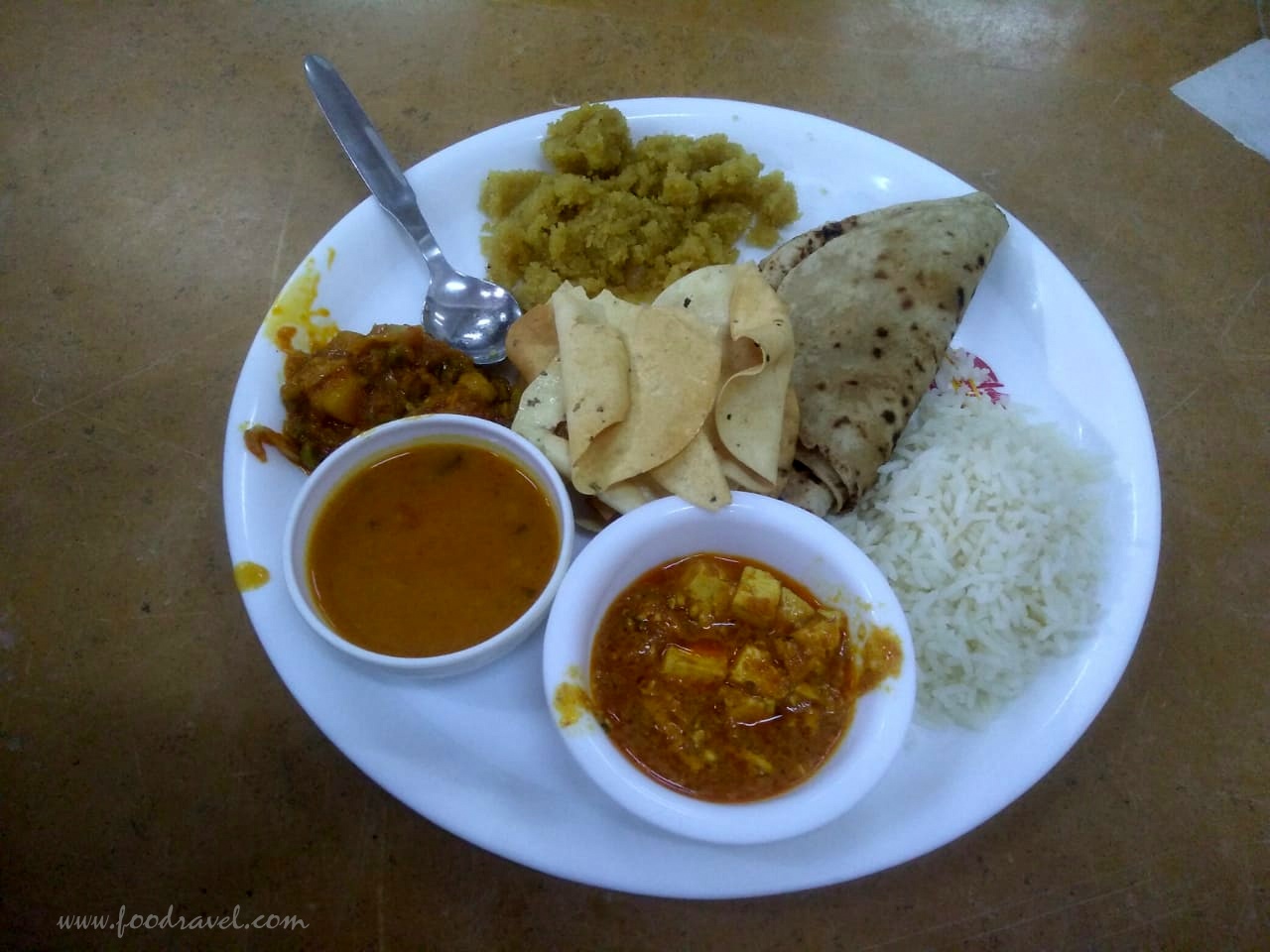 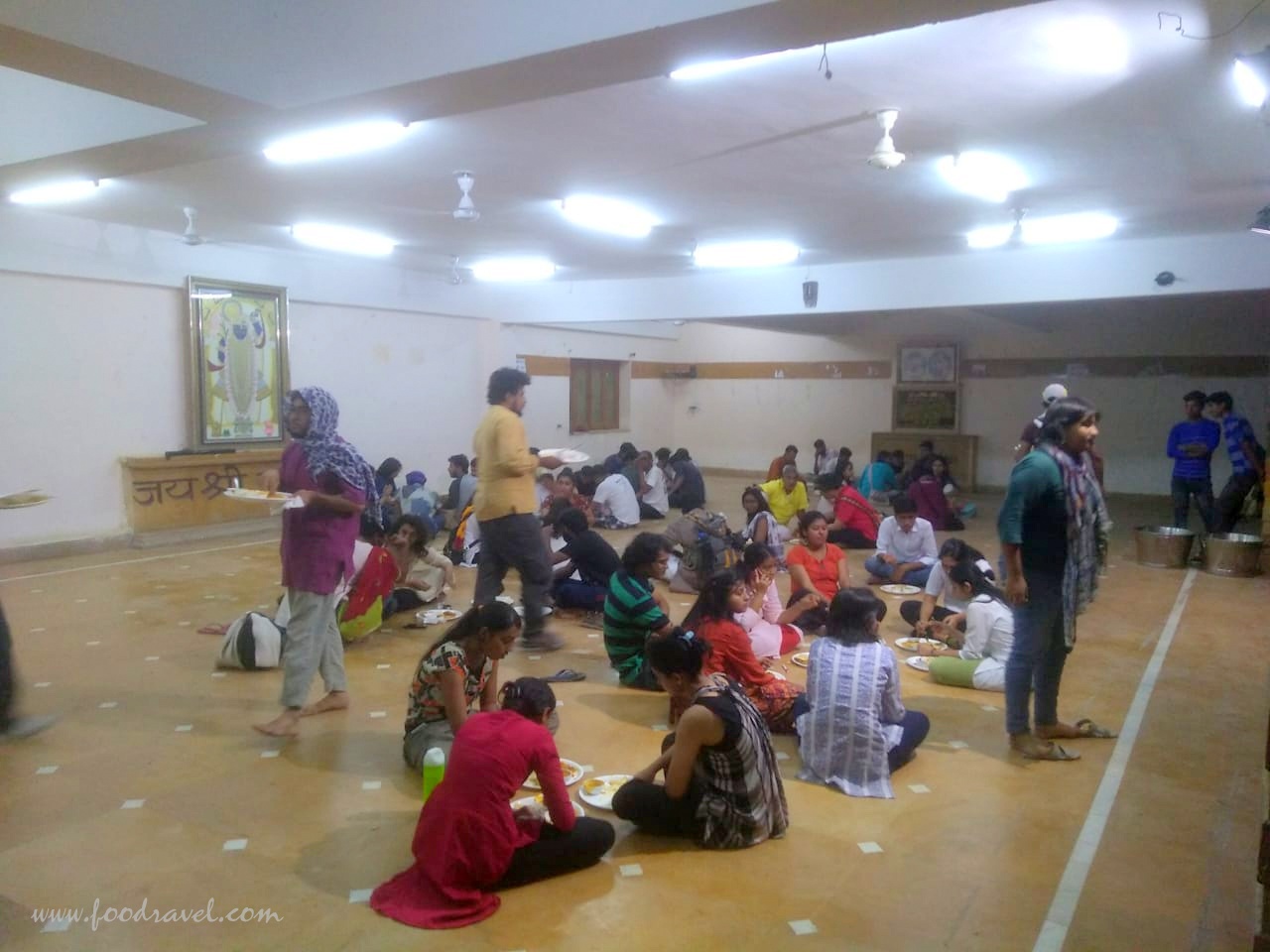 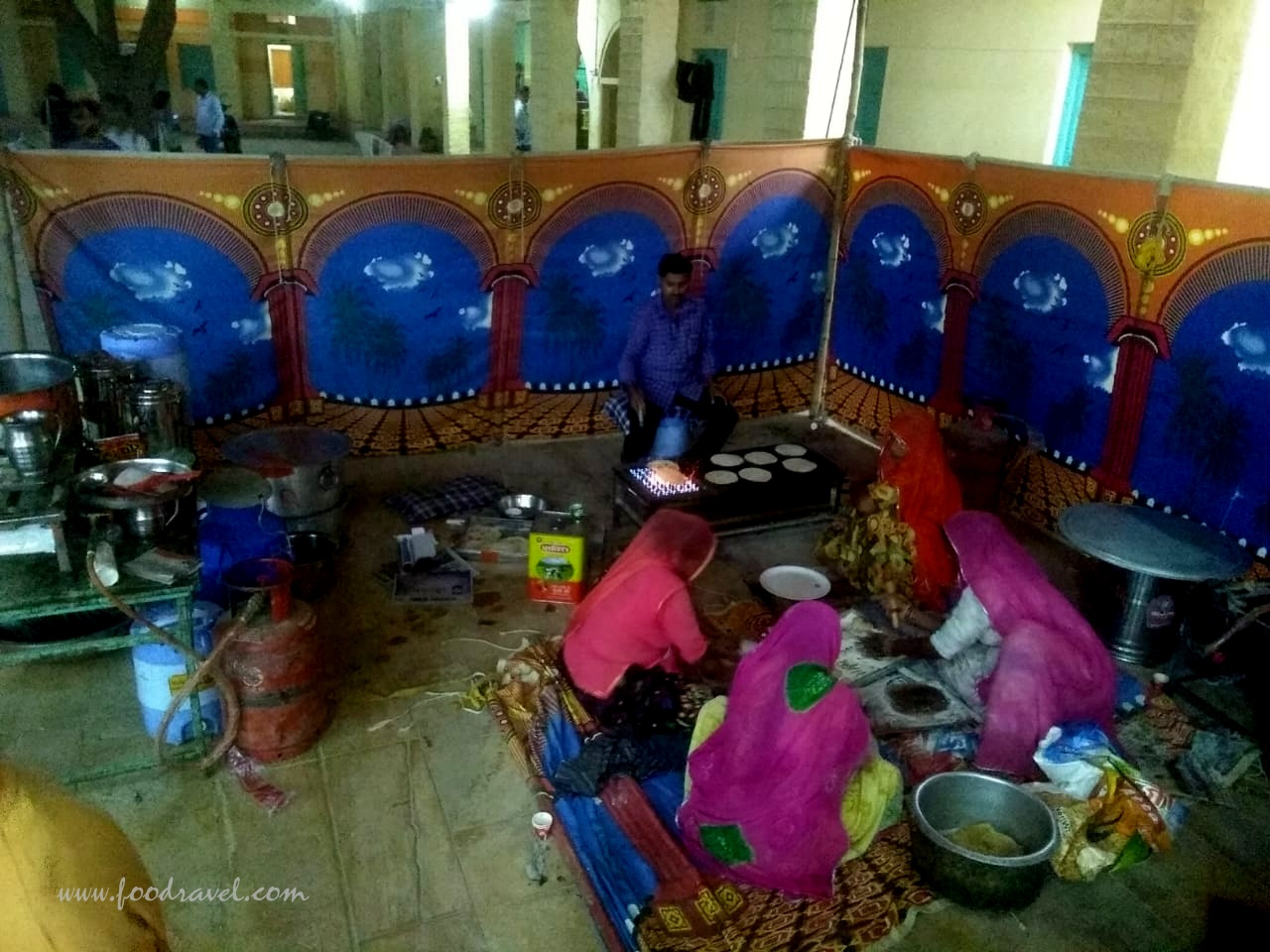 I didn’t expect this much in the desert. I thought it would be basic but it was an eye-opener.  Such royal dinner in Sam sand dunes! I just thanked everyone for that delicious dinner. I thanked the cook and everyone in the staff there. It was truly amazing. I mean the desert and the dinner, perfect combination and perfect situation. 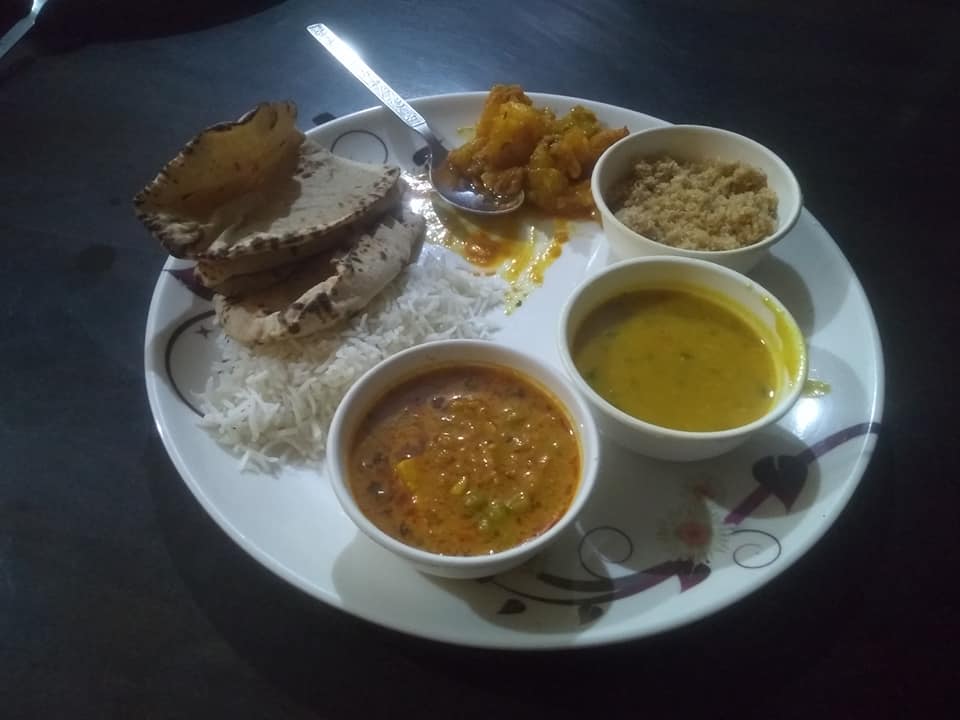 We even had chai, sutta, biscuits, and snacks in the desert. Watching the live music concert, sitting over a sand dune, where the sand was cold enough to soothe your soul, people enjoyed hot tea. But hell no! I don’t drink tea. Well, I most of the time miss the chai wali feelings. This is actually a bond and people share it. Since I don’t do it, I feel socially boycotted at times. No drink (alcohol) and no tea! What a life! 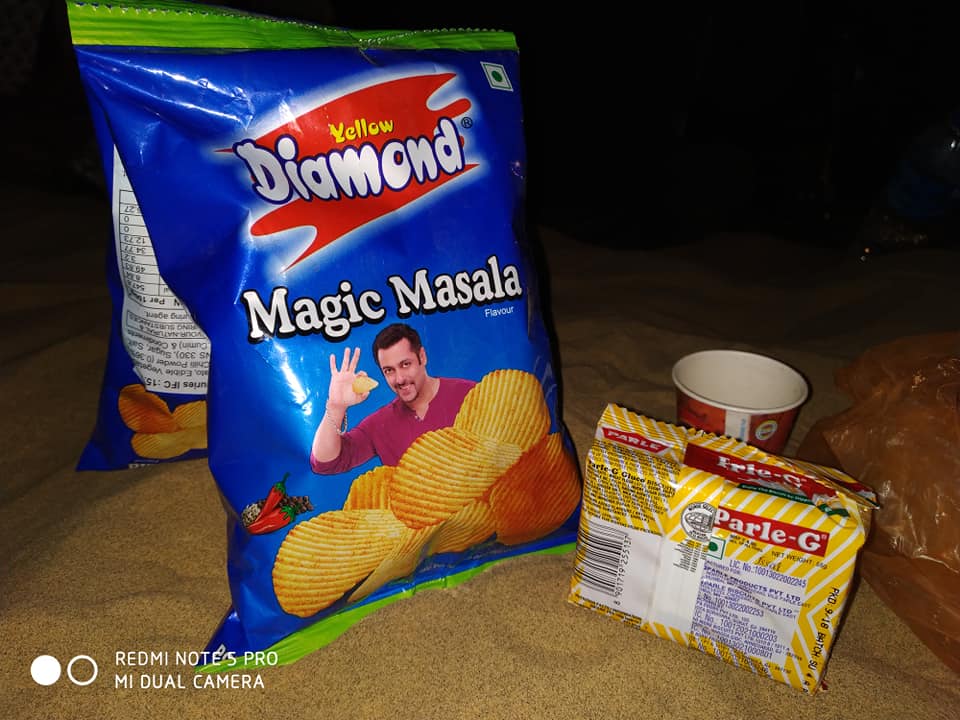 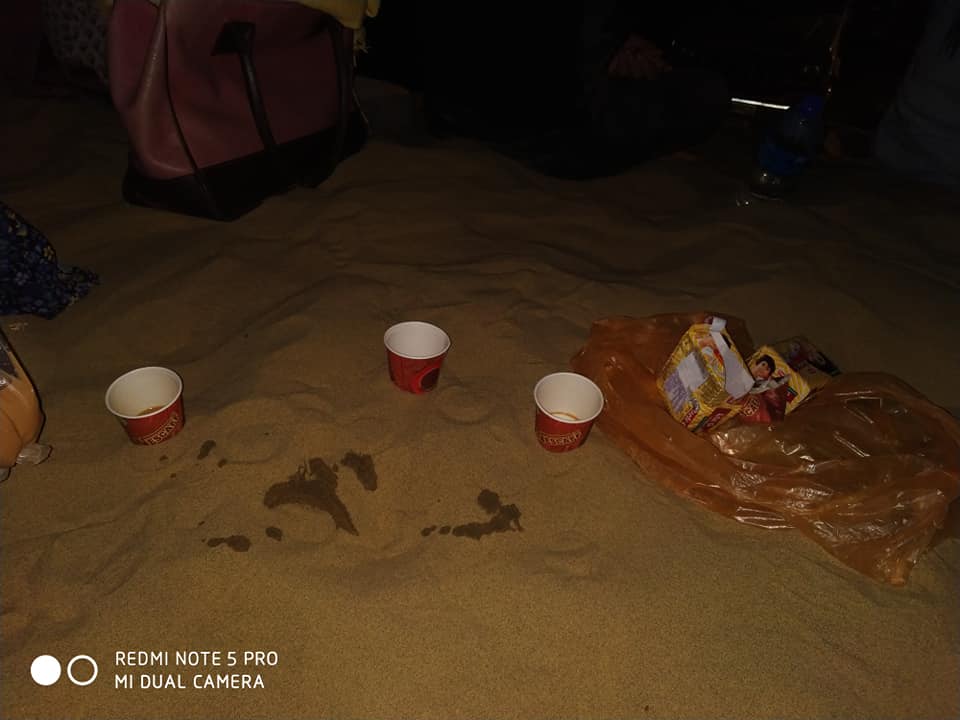 So when it was my last day of the Rajasthan trip in Jodhpur, we visited the blue city. Well, I was expecting a mini Santorini in Jodhpur. It wasn’t blue at all but everything. So we took a long walk, came out of the streets and took an auto-rickshaw and the driver dropped us at a Dhaba kind of restaurant. It was a congested place and I couldn’t fit as I was hitting the ceilings. So, when I held the menu in my hand, I was shocked to see the names of veg curries. They were all sweet dishes like gulab jamun, ras malai, etc. And we were totally confused. The guy there told us that’s the food in Rajasthan. I mean I know what Rajasthani food is but that was totally strange. So, he then told me that the making is almost the same, as the ball of Gulam Jamun but after that the process and cooking are different. So, after a long discussion over the menu regarding what to order, we finally ordered daal fry, Kabuli rice, and ras malai. Oh yeah, again it was full of ghee and I felt like eating a ladoo since the taste of ghee dominated over the spices. 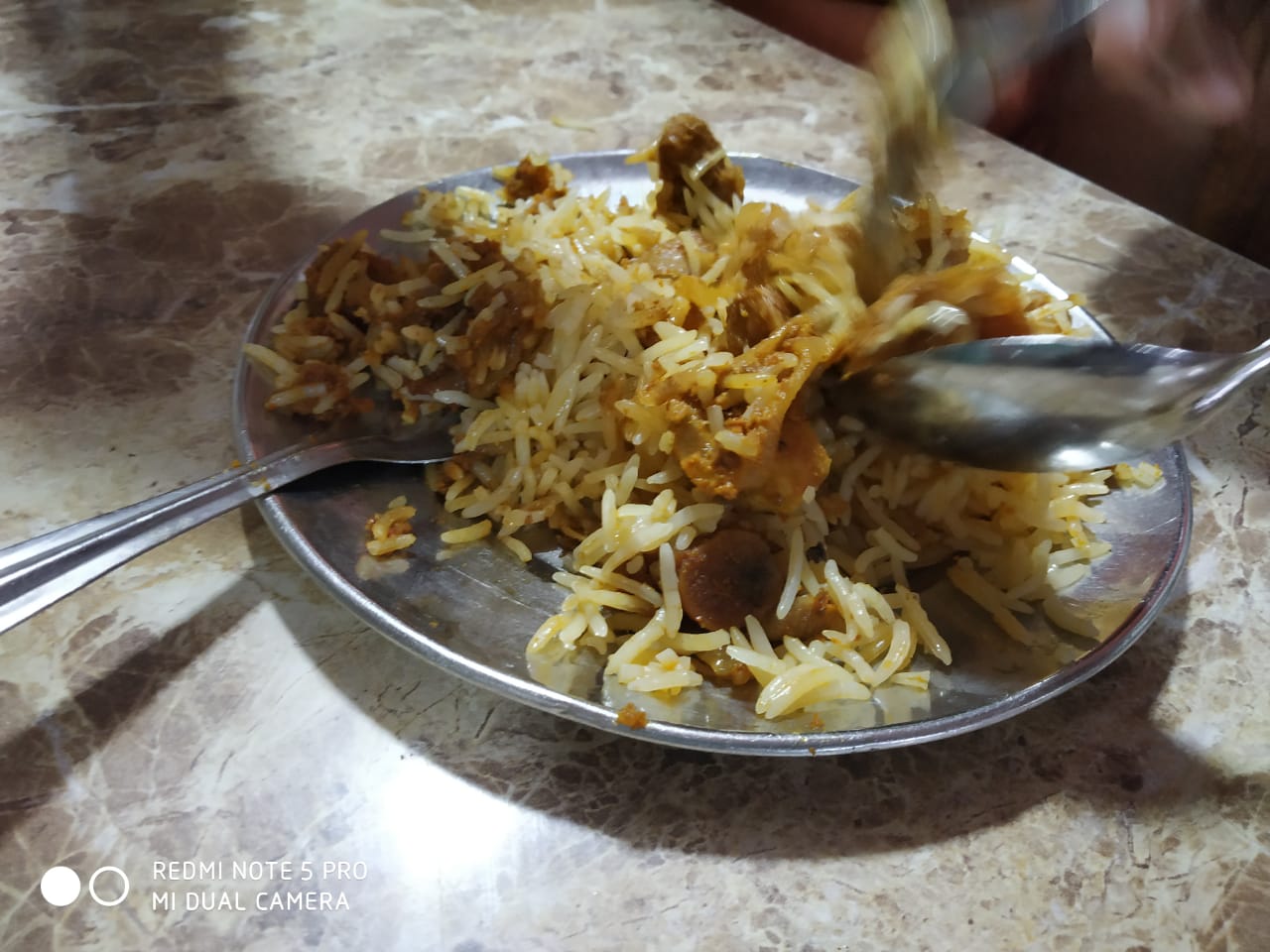 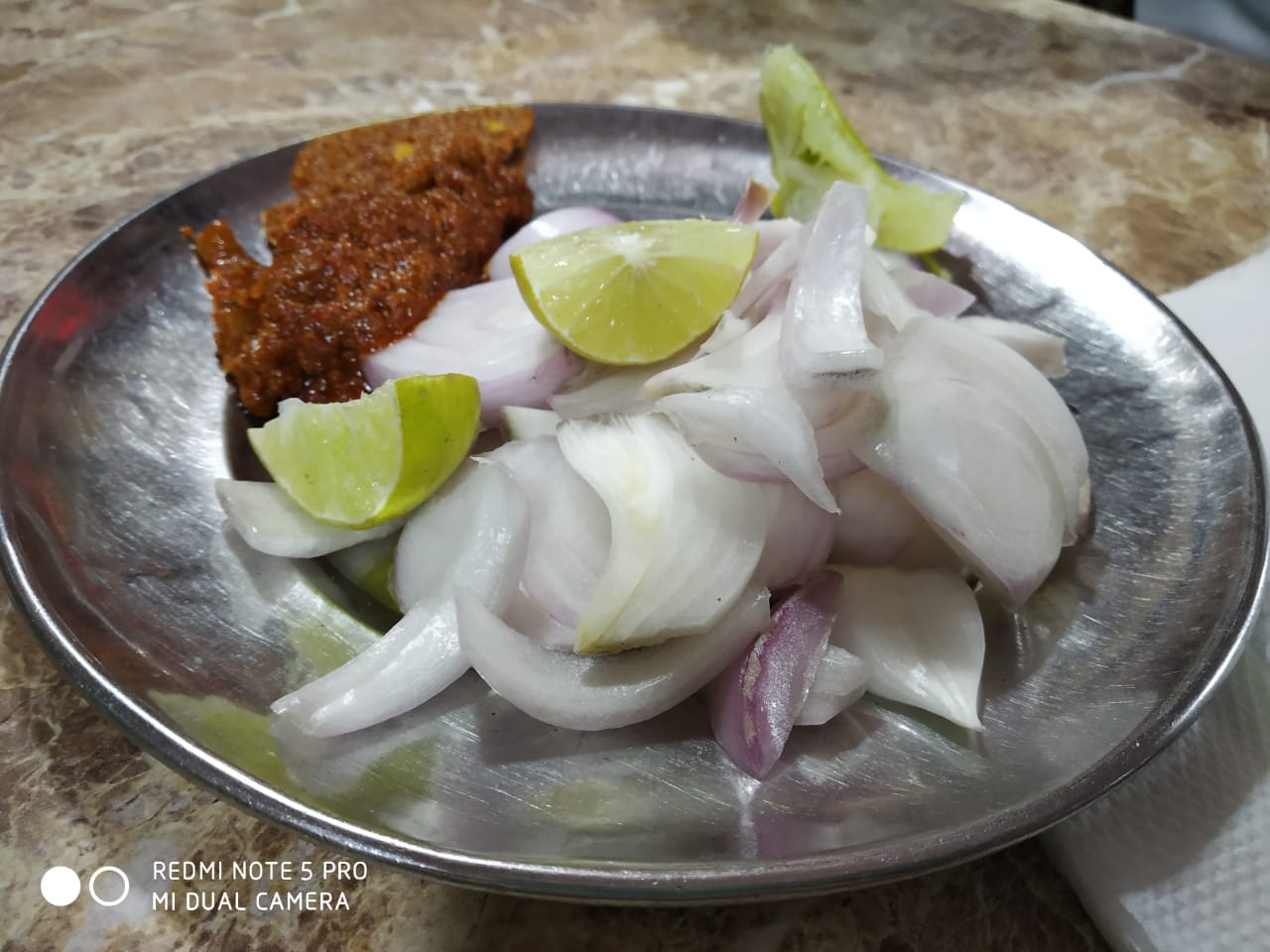 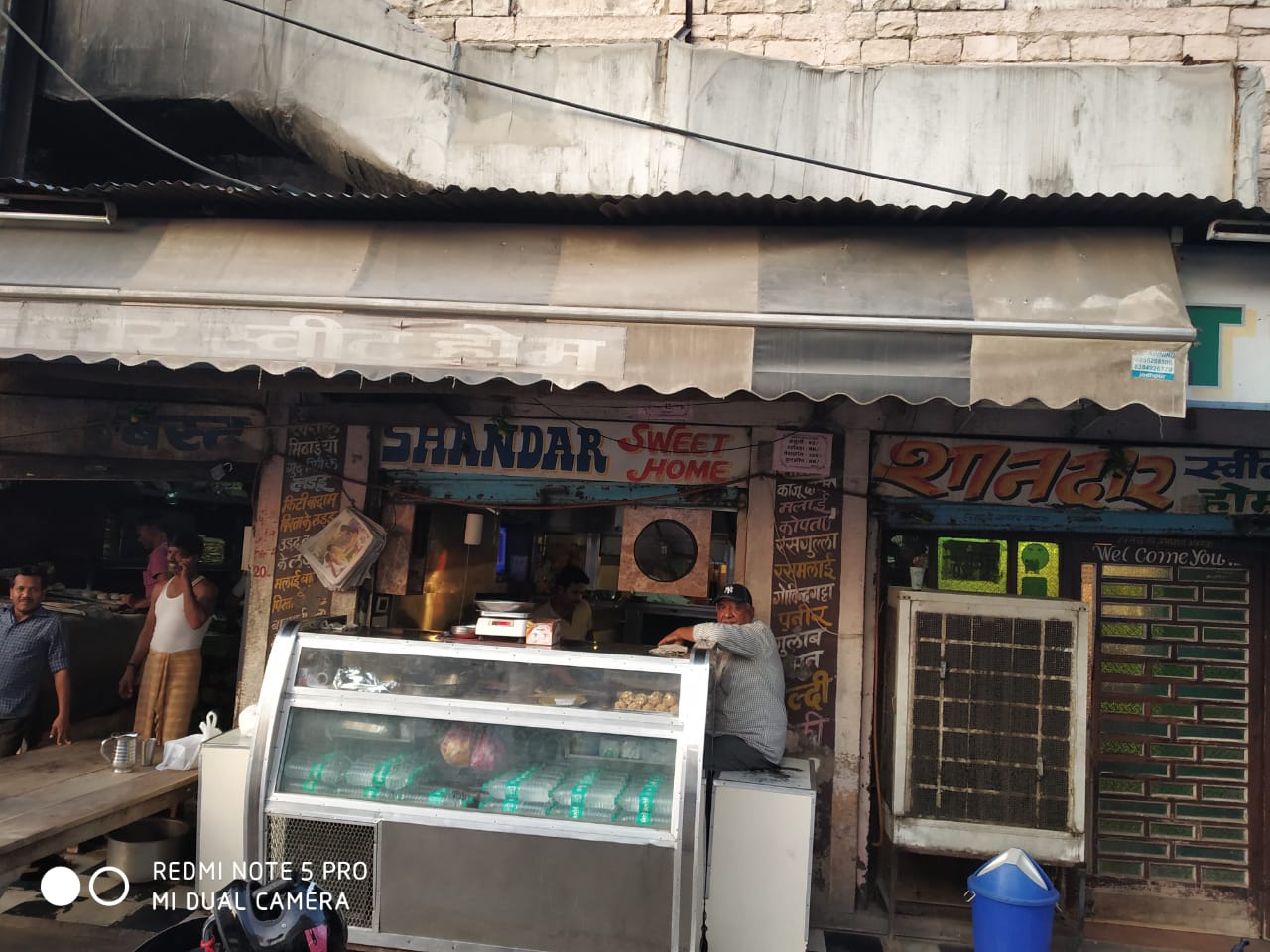 Traveling to remote places isn’t that easy. Whenever you travel to a place, you need to follow set rules and ethics of that place. Overall, it was a great experience. It was the first time for me to try such food in Rajasthan. I have tried traditional Rajasthani thali at Jaipur twice and also Delhi Haat but this was totally different from others. This reminds us to find satisfaction in the things we get easily.

2 thoughts on “How has been the food in Rajasthan during my journey?”