Is it safe to wrap food in the newspaper?

Have you ever thought if it is safe to wrap food in the newspaper? No matter, what food is, be it oily, dessert, or dry food, we have seen wrapped in newspaper or any other paper which has something printed on it. We usually follow this exercise in our routine life where we wrap our food in the newspaper for packing. When I was a school kid, I too have had this. And I am sure everyone must have once in their life, have experienced this. Wrapping food in newspapers is a very traditional way of packaging. So, why are we talking about this if it is healthy to wrap food in the newspaper? Because studies have shown that it is not. Let’s have a deep look at this matter.

Some situations where we wrap food in the newspaper:

Why is it unhealthy to wrap food in the newspaper?

Well, it’s not just the newspaper; it’s about every other paper that is printed. We are actually talking about the chemical ink which is used in printing the paper. The chemical ink used for paper printing is very toxic in nature. When it comes in contact with food, (hot and oily food), it gets dissolved with the food. Once the ink gets in touch with hot and oily food, the chemicals can cause digestive problems. Both the oil and ink have chemicals and when both get in touch and the food heat acts as a catalyst, they start reacting with each other. Thus, they lead to food contamination and several other gastronomic issues. In some cases, this situation can even lead to cancer and can be fatal due to severe food contamination. The ink contains metals such as lead and cadmium which are potentially harmful if consumed.

Lead poisoning can cause several troubles to human health. It can lead to nausea, constipation, headaches, and stomach-aches in early, low-level situations. If not taken care of this, lead poisoning can even damage the nervous system and kidneys leading to death sometimes.

No doubt, if you wrap food in the newspaper, the chemical elements can transfer from the newspaper into your food. While I was reading this topic on the internet, I came across some important information from acclaimed journals, which I would love to share with you.

According to an article published in an online journal, Daily Monitor, 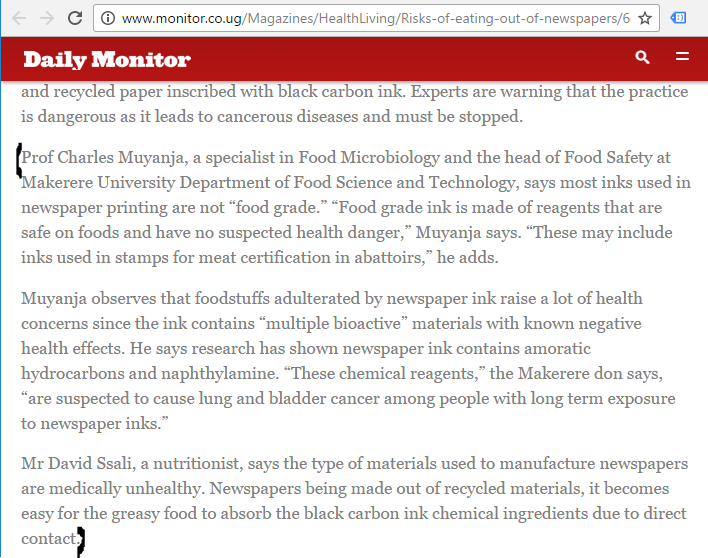 In the same article, it is written that Kampala had a typhoid outbreak and the newspapers were found to be the potential agents of salmonella bacteria. The article can be read at http://www.monitor.co.ug/Magazines/HealthLiving/Risks-of-eating-out-of-newspapers/689846-2654372-tmpclz/index.html

Another very informative article published online is the following, which can be read at www.dawn.com/news/1107947 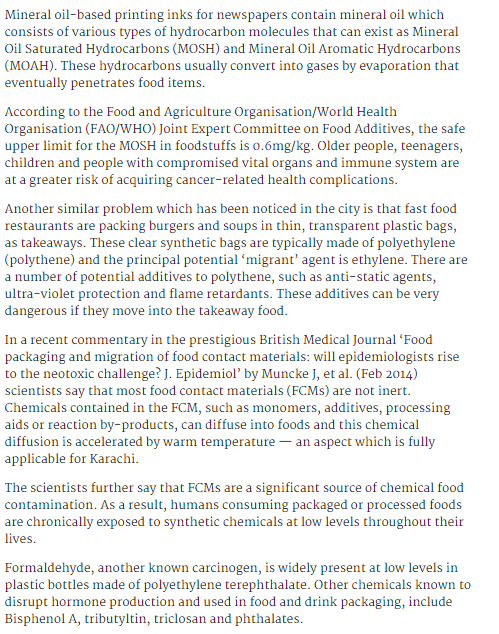 People even use newspapers to wrap fresh vegetables thinking that it will help to preserve the vegetables for a longer time.  The ink used in printing is compositionally complicated. Not only the pigments but also the organic solvents are harmful which can in contact with the food if we wrap food in the newspaper.

We are concerned about the food we eat, but we aren’t that much concerned about how the food is served or packed. There are several toxic chemicals such as di – n – butyl phthalate and di-isobutyl phthalate. Eating food that contains harmful chemicals itself isn’t healthy and if the harmful chemicals are introduced into your food from outside, then this is something to be concerned about. So, all we can say is it is not safe, wise, and healthy to wrap food in the newspaper.
As we can see, it is very harmful to wrap food in the newspaper, so it needs more awareness as we see so many people around us doing so due to lack of information. So, next time you find to go out for street food or anything another such place, make sure that the food wrapped and served in hygienic conditions.

How to store Packaged Food?