Delhi is among the most ancient and historical places in India. This place dates back to period 300BC during the Maurya. This place has been mentioned in mythologies thus is believed to be a very ancient place. As the city has a great historical significance in Indian history, it’s important to know about Delhi. Moreover, it’s fun indeed to have a look at the ancient historical buildings of Delhi, which narrate stories of history. Looking at them and reading about them is like going back to the past history and imagining everything live with wide-open eyes. Historical buildings of Delhi are now famous tourist attractions and few have been listed in World Heritage Culture by UNESCO. So, let’s sit in the time machine with FoodRavel and explore the past of this city.

Red Fort is on the top of the list of ancient historical buildings of Delhi and is not a tourist attraction for Indians but also attracts visitors from all across the world. Red Fort or the Laal Qila was built by the Mughal Emperor in 1648. It was the residence of the Mughal Emperor Shah Jahan who commissioned the construction of this building in 1638. An interesting fact is that its architect-designed is done by Ustad Ahmad Lahauri, the man behind the construction of the Taj Mahal. Its construction was completed in 1648 which was started on 3rd May 1638 in the holy Muharram month. At present, every year, the Indian PM hoists the national flag and delivers his speech. This place is open for both national and international visitors.

The 73 meters majestic brick minaret, Qutub Minar is the tallest in the world. Among the top-rated ancient historical buildings in Delhi, this building is declared as World Heritage Site by UNESCO. The then Mughal Emperor and founder of Delhi Sultanate, Qutb al-Din Aibak commissioned to build this minaret in 1192AD which is really long back. As per Wikipedia, there is confusion in its naming which is either based on the name of Qutb Dil Aibak or the famous Sufi Saint Qutbuddin Bakhtiar Kaki. The construction was started by Qutb al – Aibak and his successor Iltutmish who was his son – in – law continued the construction up to three more storeys. The top storey of the building was damaged by lightning. Later on, Firoz Shah Tughlaq started the restoration work of the building and replaced damaged parts with new storeys. 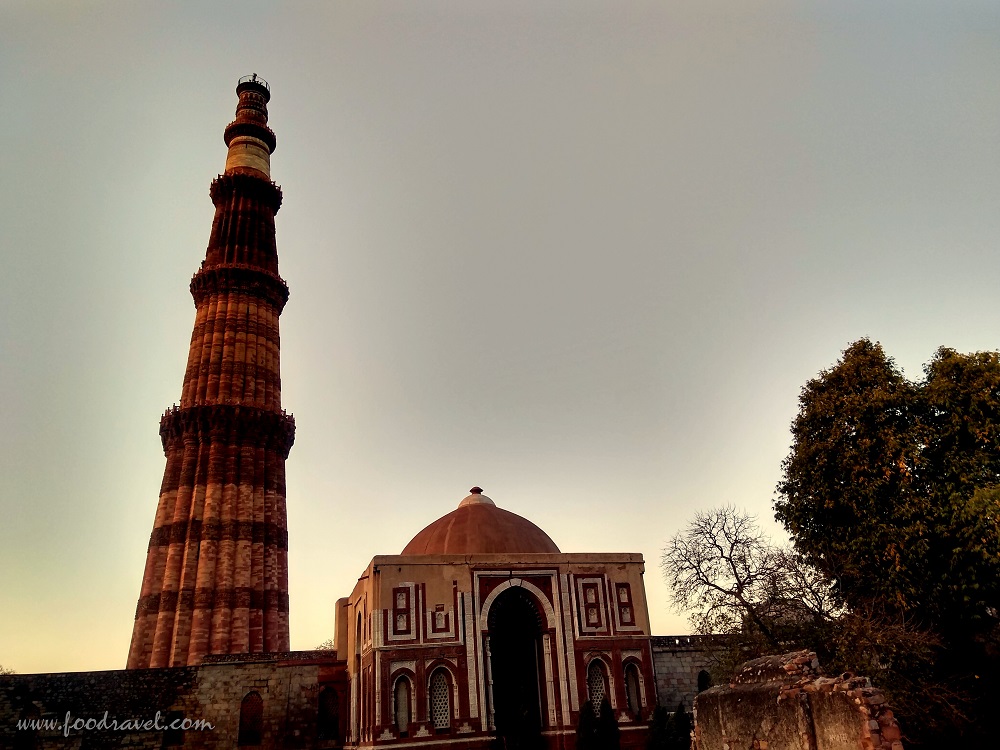 Designed by Mirak Mirza Ghiyas, Humayun’s Tomb is among the most remarkable ancient historical buildings of Delhi. The tomb was built by Akbar for his father Humayun. It was started in 1565 and finished by 1572 AD at around a cost of 1.5 million INR at the time. It is located in Nizamuddin East. This tomb was the first garden-tomb of the Indian subcontinent. UNESCO declared it World Heritage Site in 1993. Located away some hundred meters from the main road, this place is very huge and you need an entry ticket to buy from the gates. It is very spacious with gardens at the start. The whole architectural design of the buildings seems like a fine mixture of Indians with Persian architecture. When the British ruled, they removed the garden which was there, and made their own garden. The Archaeological Survey of India somehow has managed to restore its past. 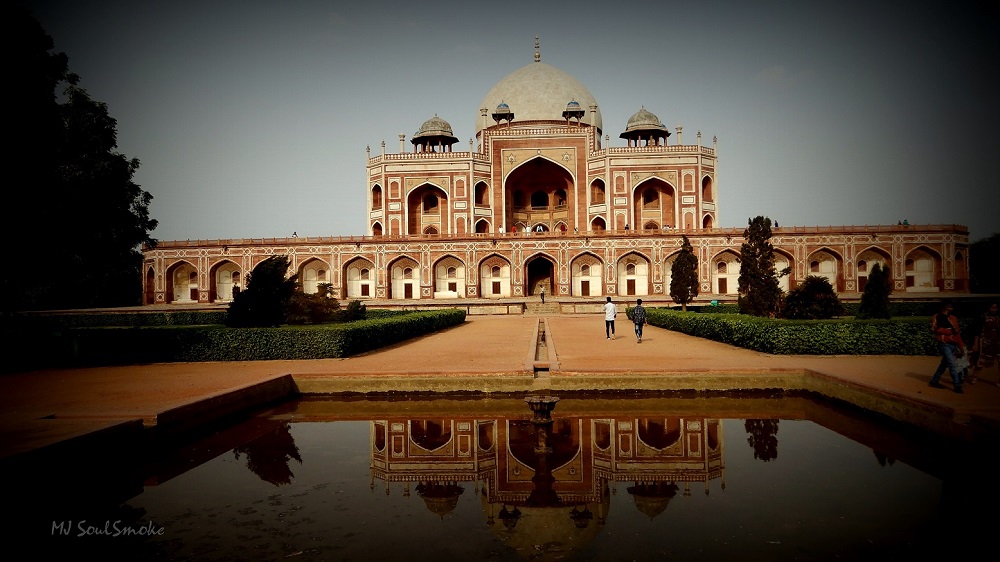 Among the ancient historical buildings of Delhi, is the famous Jantar Mantar. It dates back to 1723. This building was built by the then Jaipur Maharaja Jai Singh II. This building is not only historical but also has scientific significance. There are 13 architectural instruments of astronomy. The meaning of this monument’s name is ‘instrument for calculation.’ There are five such buildings with the same names built by Maharaja Jai Singh at Delhi, Mathura, Ujjain, Varanasi, and Jaipur. The main aim to build this monument was the time prediction, observing the planetary movements, and compiling the astronomical tables. The building has several observatory instruments. These are Samrat Yantra, Jayaprkash Yantra, Mishra Yantra, Niyati Chakra, and Ram Yantra. This place is open to visitors from 9 AM to 7 PM. It is located near the famous Connaught Place. 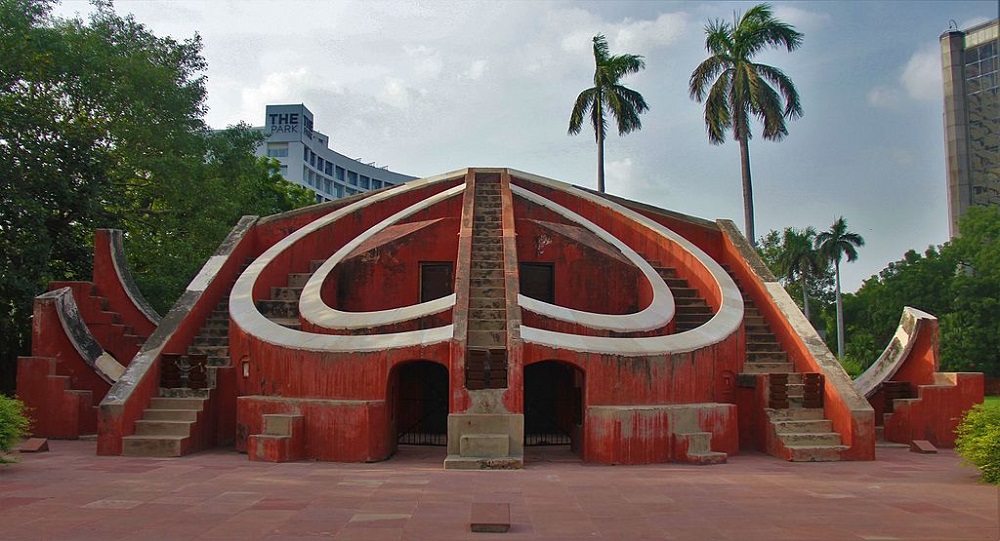 Purana Qila which means Old Fort is among the oldest historical buildings of Delhi. Located near to Delhi Zoo on Mathura Road, this place is close to Pragati Maidan metro station and one can even walk to it. The founder of the Sur Empire, Sher Shah Suri constructed its current form. He died in 1545 and his son is supposed to have constructed some other parts which are still uncertain. The fort has three huge arched gateways. The one still in use is Bada Darwaza, the Big Gate faces the west. Second is Humanyu Gate in the south (named so maybe because it was built by Humanyu or maybe because Humanyu’s Tomb is visible from here). The last gate is Talaqi Gate, which also means the forbidden gate. There are two structures inside the qila Shermanda and Qila – i – Kuhna Mosque (still survived).  The walls and gateways were constructed by Humanyu. Sher Shah Suri displaced Humanyu and continued the construction work.

The best way to explore the cultural heritage of Delhi is to visit it's forts and archeological sites. There are so many stories wrapped in the stones and bricks of these forts which can take you back in the times of their glory. Walking here with a mind to explore and learn brings so many interesting narratives which you may not find in any text books. It's an experience which you can only live once you come here. Purana Qila is one of such monuments standing majestically on the heart of the city where you will be immersed in the history. . . . . . . . . . . . . . Follow @my_foodravel for more #delhi #incredibleindia #monumentsofindia #fortsofindia #delhidaily #delhi_gram #delhitourism #delhidiaries #olddelhi #puranaqila #delhitimeline #travel #travelporn #travelindia #travelinspiration #travelgoal #traveldiary #travelphotograph #travelpic #travelingram #nomad #wanderlust #vagabond #travelstoke #travelbug #traveloften

Among the ancient historical buildings of Delhi, Agrasen ki Baoli is quite an ancient place in Delhi. Among the most visited places in Delhi, this place has been a part of movies such as the famous PK movie. Located on Hailey Road, this place is around 15m wide and 60m long stepwell (baoli). So far, there is no proof of who built it. King Agrasen is supposed to have built it. It was rebuilt by the Agrawal community in 14th There are 103 steps in this step well and is divided into three levels, every level linked on both sides by arched niches. The place in the center contains water. The water is connected to a well which is dug in a covered platform. The purpose of this structure was for providing water to the people and also for the passengers, thus it is a water reservoir.  This place is open to the public. There is no entry charge.  The nearest metro station is Barakhambha. 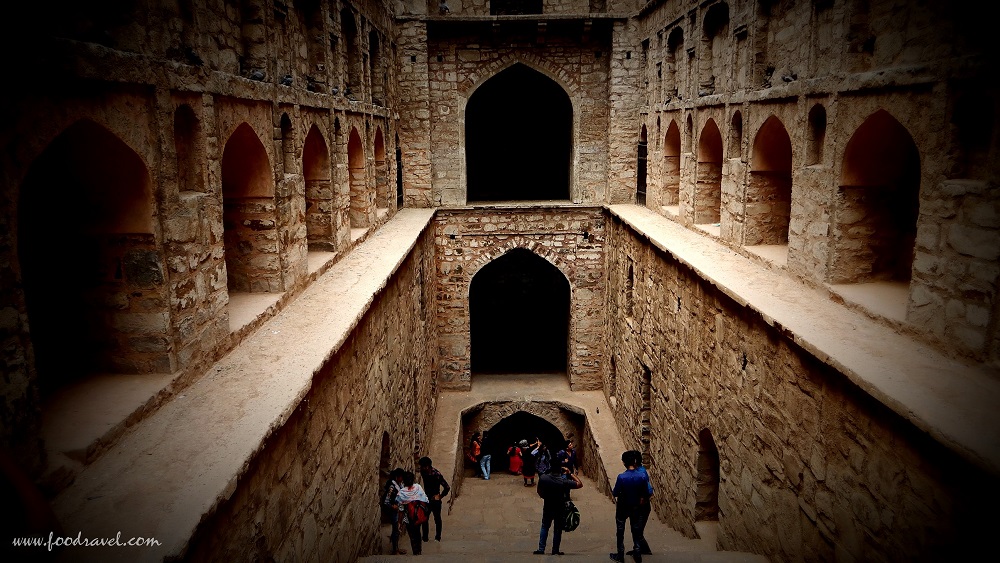 Does the name ring a bell? If you watch cricket then it does. This fort is situated between Old and New Delhi, near Bahadur Shah Zafar Marg. The then Emperor Sultan Feroz Shah built this place in 1354. He also built the city, Feroz Shah. Shamms Siraj Afif, the then historian who lived during the emperor’s time, wrote that the city was very beautiful. The buildings were up to Northern Ridge in the north which today is known as Pir GHaib. The South is stretched to Purana Qila. A grand and royal citadel, Feroz Shah Kotla is among ancient historical buildings of Delhi, with walls reaching to a height of almost 15m. The parapets have gone disappeared while arrow slits are still visible. Inside the fortress, there was a place for officers of the emperor, the Palace of Wooden Gallery while the Palace of Public Court was meant for holding general public court. 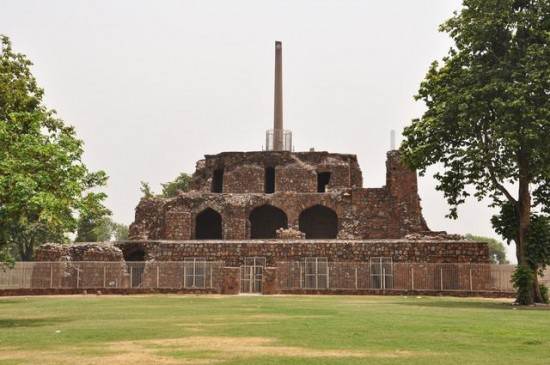 Also known as the Tomb of Safdarjung, this place is a beautiful tomb made of sandstones and marbles. This mausoleum was for the statesman Safdarjung in 1754, who was made prime minister in 1748, after the ascending of Ahmad Shah Bahadur. There are many small pavilion structures such as Moti Mahal (Pearl Palace), Jangli Mahal (Palace in Woods), and Badshah Pasand (King’s Favourite). There are so many places in Delhi that were named after it such as Safdarjung Development Area, popularly called SDA, Safdarjung Enclave, Safdarjung Hospital, Safdarjung Road, Safdarjung Terminal, etc. The nearest metro station is Jor Bagh. The tomb is open all days from sunrise to sunset. 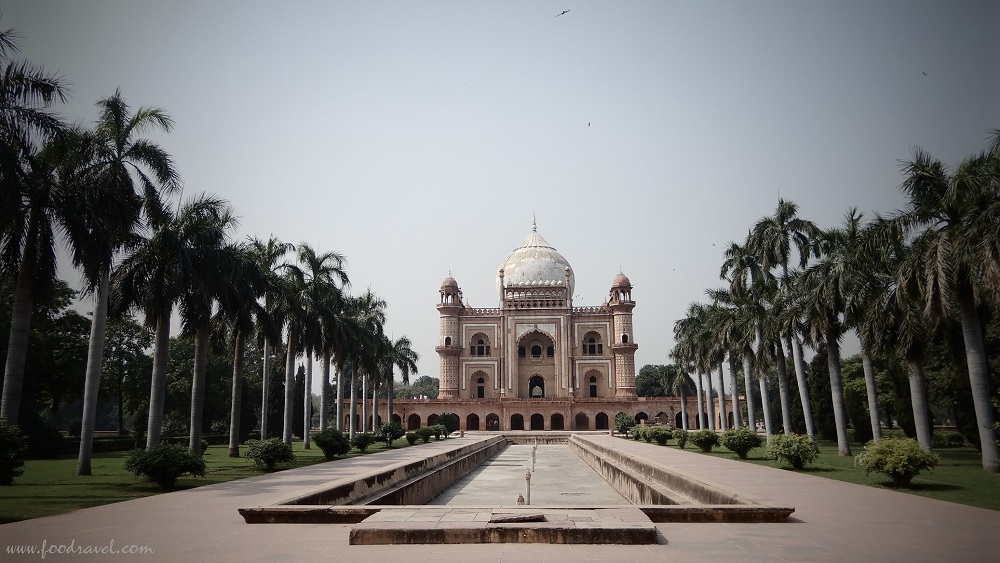 Among the largest mosques in India, this mosque was built by Mughal Emperor Shahjahan. It was built between 1644 and 1656 and said to have been built in around one million rupees. The Imam of Bukhara (present-day Uzbekistan) inaugurated this mosque. The mosque was built with sandstones and marbles. This building has four towers, two minarets of 40m height, and three gates. The courtyard of the mosque can accommodate around 25,000 devotees. It is located west of Red Fort, off Netaji Subhash Marg, and is at walking distance from Red Fort which can be seen from the mosque. The nearest metro station is Chawri Bazar. This mosque is open to everyone at no entry fee. Tourists aren’t allowed during the prayers hours. 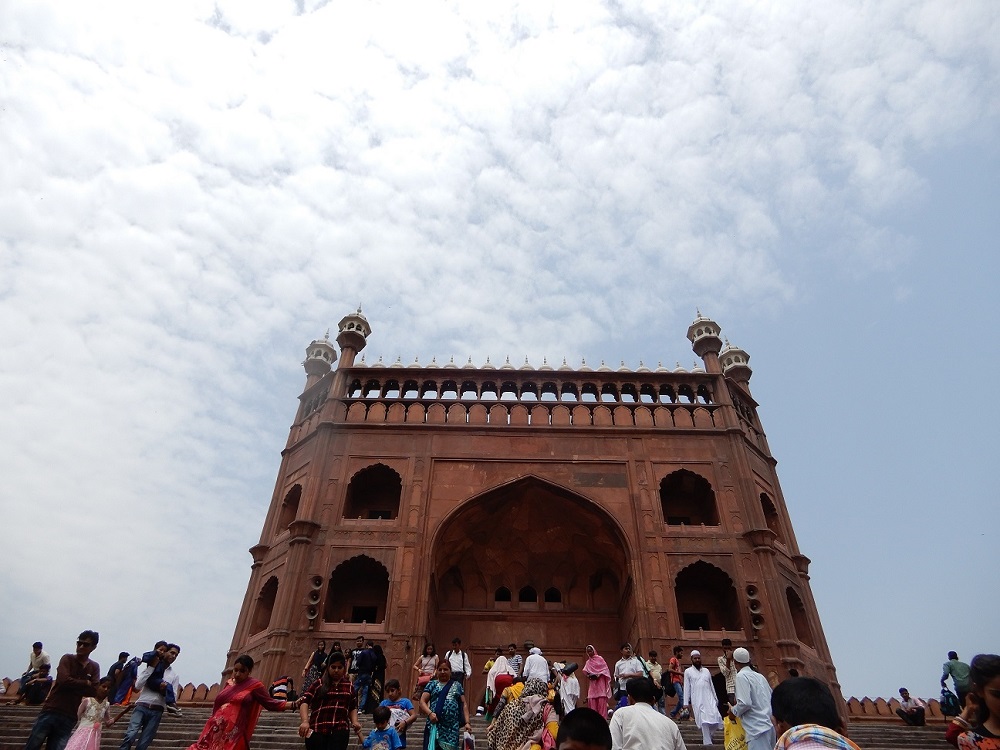 Lodi Tomb: Also known as Tomb of Sikandar Lodi, this tomb is dedicated to Sikandar Lodi, the second emperor of the Lodi Dynasty. The tomb is located in Lodi Gardens. The tomb was built in 1517 – 1518. Ibrahim Lodi, the son of Sikandar Lodi built it. The tomb is octagonal designed and its architectural design is a mixture of Indo – Islamic architecture style. This tomb is among the earliest garden tombs of India which are still in existence. The walls are inscribed with many foreign languages. The place earlier used to be known as Khairpur.  India Gate is around 3KM away from here. 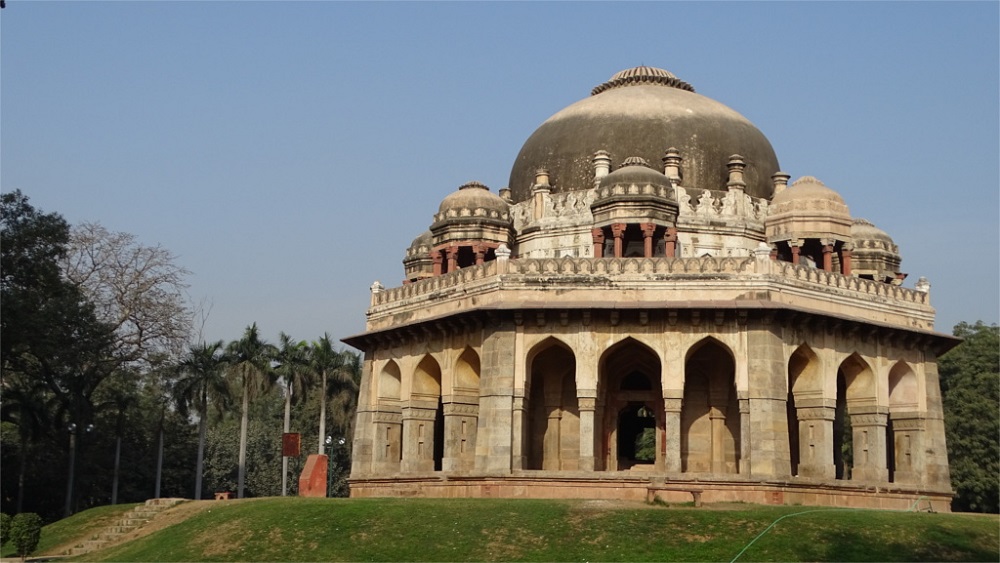