Huda city metro station is the terminal metro station on the yellow line. The metro station is a huge one in the area and one can see crowds of working people round the clock. When it comes to the festive seasons, the situation gets more complicated. Now the more crowd gathers there as the metro city has introduced its own food court which is known as Metro Park Food Park, with many food outlets. The metro station is now famous for being everyone’s favorite food place. From local to international, all the food stores and chains are available there. The more beautiful is the live performance by singers on weekends.  The food court is just adjacent to the metro station and there are several gates of it. You can enjoy both food and travel to this place.

Today, I visited the food court. I was looking for something to eat for breakfast as was very hungry. When I entered the food court, a small hanging poster “Breakfast”. It was at Chicago Pizza. It is situated at the Metro Park Food Court, Huda city center metro station, sector 29, Gurgaon. Chicago Pizza is the shop number 12. When I read the hanging poster, I found the menu contained a slice, egg sandwich, and a cold drink at just 99. Well, this morning, I had no plan of consuming any egg. So, I had to decline this option. I discussed the storeman about the menu if I could customize the menu which he couldn’t. So, finally, I thought to move on. But as he felt that I lost interest in his menu, he managed to persuade me to stay back. I went through the menu again with deep analysis and came up with two 7” bread slice, a cold drink, along with free topping. This was the Mini Combo meal. He asked me which bread slices I wanted. I again went through the menu and found the onion and capsicum and asked him for the same. After paying the bill, I went to the sitting hall and started reading the newspaper. He had asked me to wait for some ten minutes, which was all enough for me to wait sitting, reading the newspaper. I wondered if he took more than ten minutes and was in a way to lose my patience. All of a sudden I saw him waving his hand as the order was ready. I went there and took my plate. 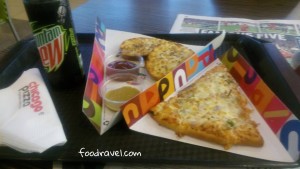 It was all okay for the morning breakfast. It was my first time to visit that food store. The bread slices were a bit oily but it was not something to be concerned about so easily. The topping was good enough and was served with red and green causes. The whole order cost 139.00 and after adding the VAT and service tax, it became a grand total of 165.00.

Next time, FoodRavel will be exploring more there and will bring you the best from all corners.