From Guest House to Ground – Roaming in Busy Streets of Kathmandu

So, the next morning we were to leave the guest house. We got up at our regular time. My eyes were very heavy and my head was about to blow. Yesterday, we both walked too much and at night, I had to sleep quite late. So I couldn’t get proper sleep and was feeling tired. When we got up we found that many of all those three of four team members who came with us from India had already left for New Delhi. We also had to leave as this was decided by the previous night itself. There was no breakfast as no one was there. Only me, Dinesh, Abdi and one more boy were there. And yes, the Nepal pastor and his wife and two little cute baby girls were also. We took a bath and got ready for our next unorganized expedition. When we all were ready to go out leaving the guest house, I thought when we are leaving the guesthouse, we should have thanked those people for their kindness and their affection. We stayed there for free, ate there for free. I shared the same thought with Dinesh. He also liked it and we both went to the Pastor’s room. I went inside and said that while staying in the guest house, if there was something which we did wrong, then forgive us! In simple words, I begged for sorry in all manners, even on behalf of Abdi. 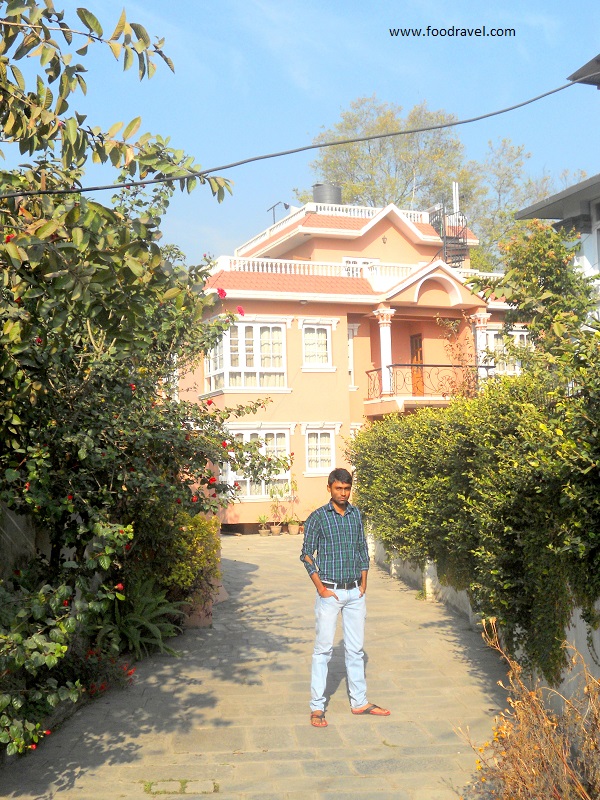 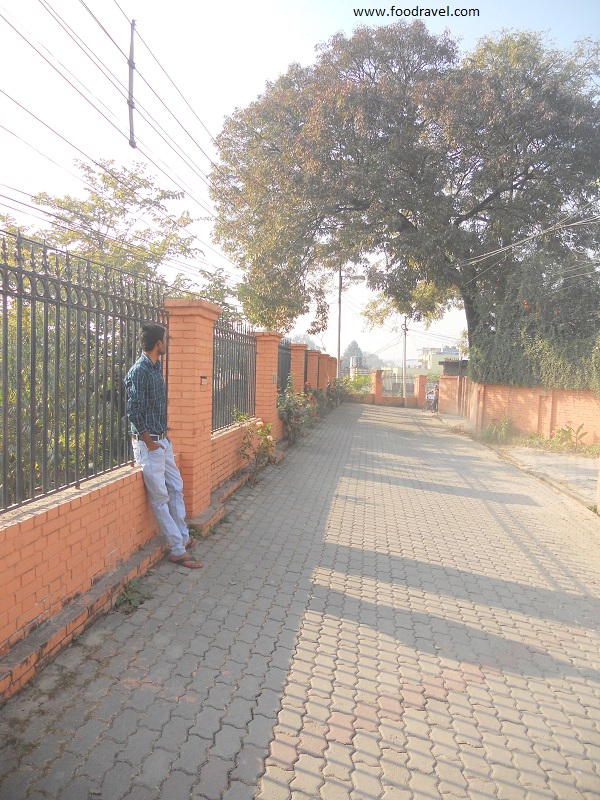 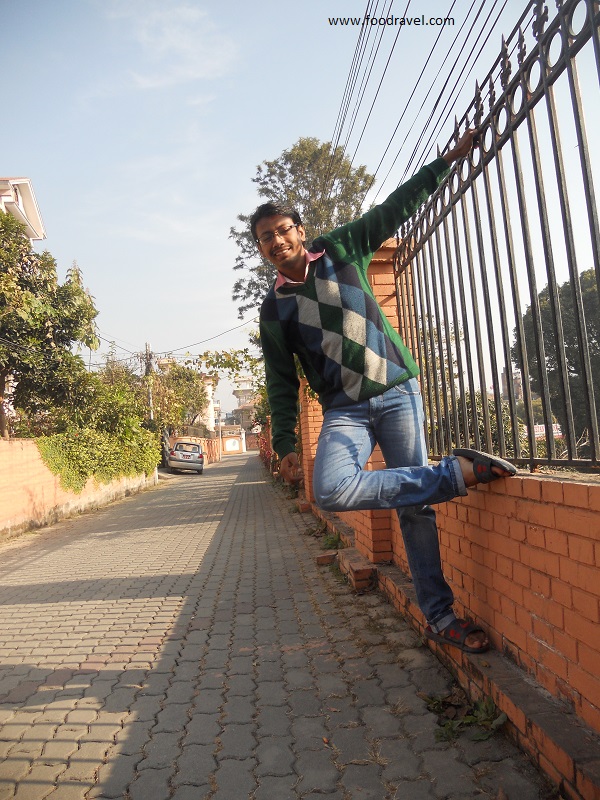 He was taken away by this. I also narrated him the story from the bible where the son leaves his father and goes to some other place, as he was filled with ego. The pastor didn’t say anything and he respected our decision of leaving. He wished us good luck and came to the door to say bye. He wanted to talk to Abdi but he didn’t reply. I didn’t know what went wrong with them. So we four nomads with our bags packed on our shoulders came out of the guest house, grabbed the last glance, and moved on. It was both good and not a good moment for us. We had no plans where would we go. Moreover, we were not in our country. On the way, we came to know that both Abdi and the other guy had no money. I and Dinesh both stared at each other’s faces. No money! What could be done? We kept on walking for around two and a half kilometers and reached a huge playground in front of Kathmandu Mall. The military had its camps there. We were tired, really tired, and hungry as well. So, we lay down on the grass of the ground. We just placed our luggage and sat on them. So, we had to decide where to go and what to do? We had not much money. We didn’t know anyone there. So finally we decided that we both would bear the expenses of each other.  One matter was sorted out. Finally, any cheap hotel. Yes cheap because we had to bear their expenses as well. First, we had to eat something. I got some cookies from the nearby market. 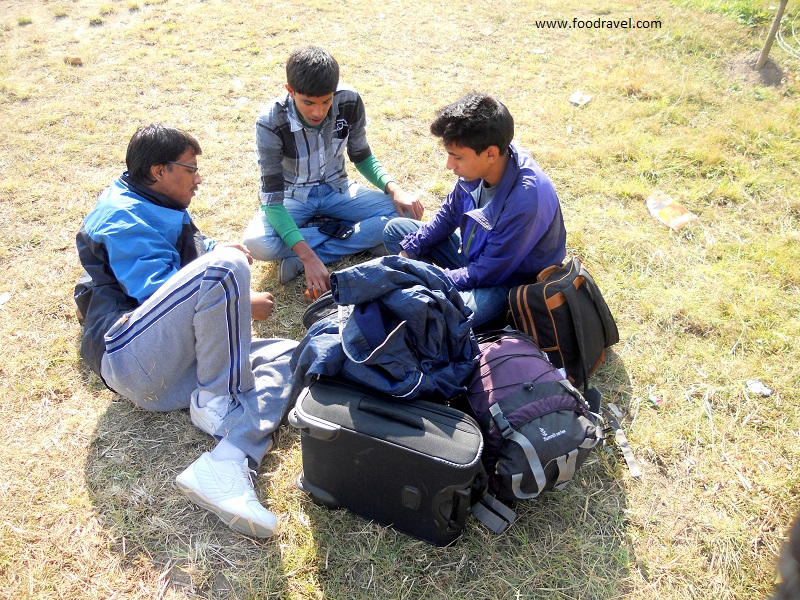 Abdi called his friend. Abdi had a friend in Nepal??? How come? He told me that he had a friend, Shakil when he used to study in Darjeeling. So from there, his friend moved to Kathmandu. I also tried to call the person whom we met at the seminar hall but couldn’t connect to the number he had given. He called his friend. He came after some time. He talked to us and said that he knew some budget hotels. So we all accompanied him. We had to stay in the hotel for one day only because we wanted to explore more but had less money. I called my manager for the money transfer to my account but he couldn’t. So, we all walked behind him and he was leading us to all unknown places. 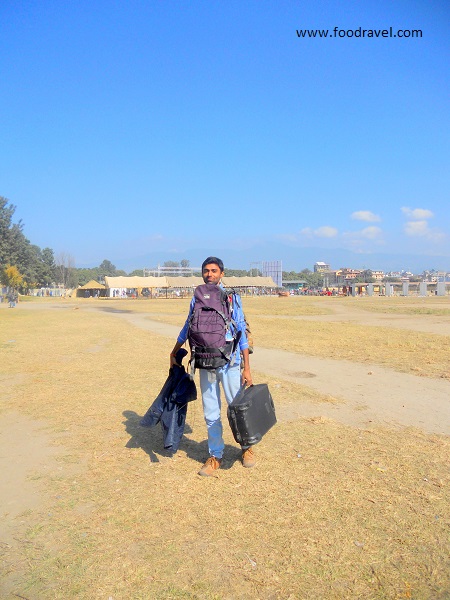 Finally, we reached Sundhara, Bhatebahal -1. There we first went to one room. It was 1000 Nepali rupees per room. We were four. And in one room only two were allowed. We requested the receptionist that we just had to put our luggage for a day as we would go to wander around. But he didn’t agree with our proposal.

Next, we went to Hotel New Mount View Lodge & Restaurant. We found it in our budget. Five hundred Nepali per room.  The hotel also provided TV, Wi-Fi, hot water and it was all the economical deal. We liked it. We hired two rooms, room no. 402 and 403. We were all tired so we just wanted to eat and sleep. We took a bath, switched on the TV, and jumped on the bed. I and Dinesh came out of the hotel in search of the same restaurant which could not satisfy our hunger but also could satisfy our pockets.  Just a walking distance of around five minutes from the hotel, we found a restaurant, Family Lumbini Tandoori Fast-food, and Restaurant at Tahagali, Sundhara. It is just close to the Dharahara tower, the big monument resembling the Indian Kutub Minar. At the restaurant, we searched the whole of the menu but only found one thing to eat, aloo parantha. Almost all the dishes were Nepali. This was the only budget item that was in our pockets and even on our tongue. So, we ordered around twenty-five paranthas.  The person was surprised to know this and even asked if we could eat all the paranthas easily. Anyways, we got our food packed and returned back to the hotel. 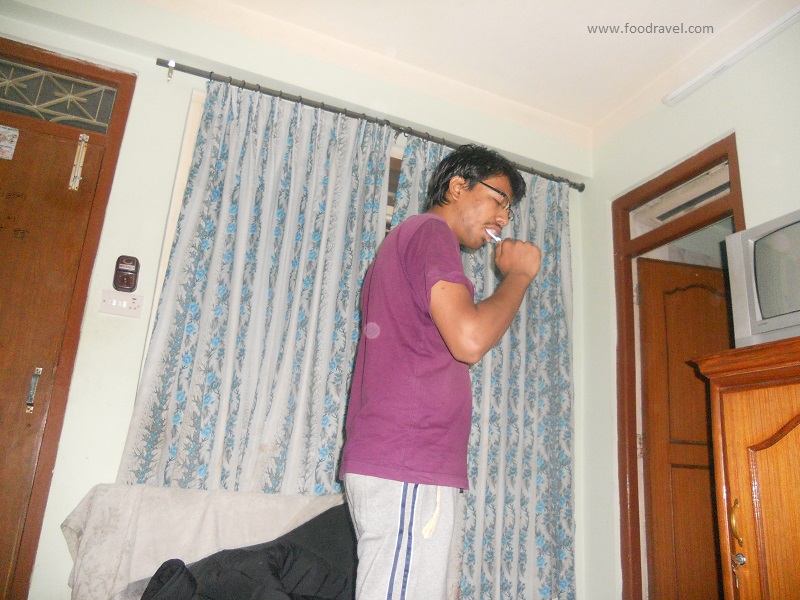 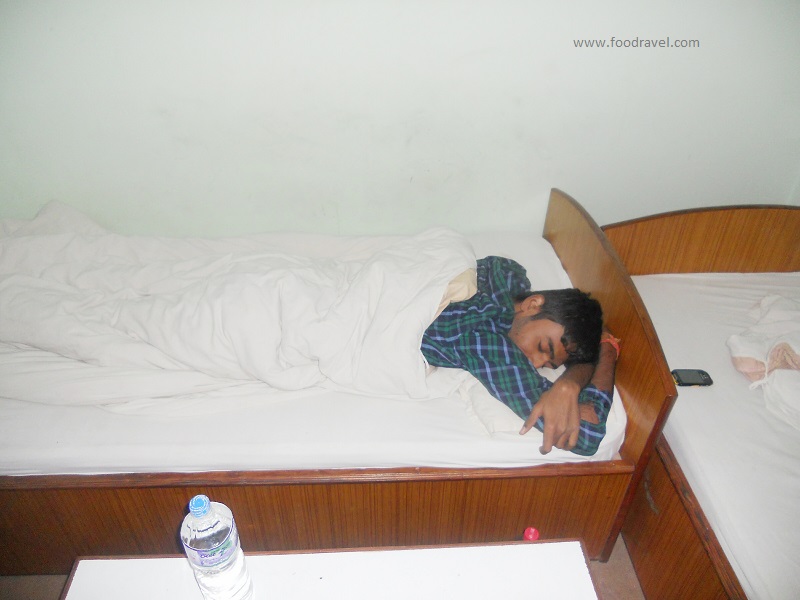 We all attacked the paranthas like hungry beasts, the lion maybe. Those were tasty but were not made of wheat flour. The raw material was something different. And the Chutney, I didn’t know what was it made up of, was just awesome. We didn’t bring anything with paranthas; we only had them with the chutney. So, we had room, we had food and then it was the time to run away. But where? Nowhere! After the royal breakfast, we visited the nearby market. Then we went to another market for shopping. Abdi bought something for her mother and Dinesh too. The other guy wanted to buy many things but we had not enough money. He was behaving like a kid, like “bhaiya le lelo, bhaiya mujhe ye pant dila do” (brother please buy this, brother please buy me a trouser). And we were like, ek to iska pura kharcha utha rahe hain or upar se isko shopping karni h pocket mein ek paisa bhi nahi hai iske” (we are bearing his whole expenses, he had got no money in his pocket still he wants to do shopping on my money). I rebuked him many times over his stupidity. After doing shopping, we returned back to the hotel.

In the second half of the day, Dinesh and Abdi both went out to enjoy and left me and another guy (I don’t remember the name) at the hotel. It started to get darker. The more it started to get darker, the more I was worried. Abdi had a SIM of Nepal, but I didn’t have his number. I found that he registered himself in the hotel register and paid for the room. So I went down and asked the receptionist for the register. First, he didn’t give but when I explained to him the concern he agreed. I got the number from the register and dialed from the phone of the reception. But it couldn’t get through. I tried contacting him from the hotel reception phone but it didn’t connect.  It was getting dark and we had no idea where they both were. I went to a public calling shop and from there I dialed his number but no reply. He might have switched off his phone. But why, no idea!

After waiting long they both returned back. I was a little worried, annoyed as well. But couldn’t do anything. In the night we had dinner from the same restaurant. Then we planned to step out at the night. We asked the hotel staff about the timings. We were told that the gate would be closed by sharp 12. So, we had plenty of time ahead. We all four planned a bit about our night exploration. Again the same, we didn’t even know where we had to go, but yet only one thing was there that we had to go on the street. Previously, we used to go every day to Jamal, so remembered the way and few names of the places there. I and Dinesh had money they didn’t have even a single penny so we had to take care of this thing as well.

We came on the road and started to roam around like strangers, though we were true. We saw military patrolling on the road and we were lucky that no one stopped and asked us about our whereabouts. Just on the basis of mere imagination and guessing the streets, we kept on moving from place to place. Without a proper map or any navigation, we just randomly moved from this street to that and when we found that it was about to be 12, we thought of returning back to the hotel. Now, we didn’t remember how to go back and it was about to be 12, so just moved randomly but anyhow we were able to reach our destination safely.