Staying at the guesthouse at Thapathali at night and then in whole the day staying out with no fun. So, we both planned to run in the city and do something really exciting. As we were out of our own country and staying like this every day could spoil our visit. So, next day we got up planned something really amazing. Dinesh came up with my plans. I didn’t like. I was little worried about their side. Those people might get annoyed as we were staying at their place for free; we were staying there and eating there for free. Whatever that was I really wanted to run free. So the next morning, we were asked to come down sit and do some reading of bible. The pastor would ask what have we learnt from the readings and we both used to look at each other’s face. The people sitting around would tell this and that and we just listened quietly. And the time came for the squad to march out of the boundary. We got ready and started to hold our arms. There were few other boys of my age, just a difference of one or two year, around 5 or 6 boys. Everyone was targeted to reach the same place exactly.

When we reached there, we both had our plans on the top. We were just looking for a chance for our planning execution. We were just about to hit the target to run away. The moment I entered this city, I wanted to run away like a roamer and wanted to explore the nature, the culture, after all you are in another country, away from your own. So the same schedule started at the seminar hall. We stayed there for some time, some hour or more. Than we got a chance and we hit the target. We got chance to escape from everyone’s eyes. Though running like that had never been my companion, but there I really wanted to. As the trip was already fixed, there nothing which could fit in our frames. And I didn’t want to let it go the way they had scheduled it. It was a one of its own kind trip and I wasn’t even aware of my next visit, would it ever be or not. So I wanted to take chances. I wanted to make it memorable. I wanted to do some craziness, some sort of insanity. We came out to hang around in the new places. Some historical and some restaurants.  Again we were wandering on the roads of unknown place like roamers. We had some money in our pockets and a small camera which he bought from his home.

We visited a restaurant. Its name was pretty attractive. Facebook restaurant. It was situated at Jamal, near to the place we used to go everyday. We enjoyed Indian food, Masala Dosa and Chholey Bhature. You don’t have to be surprised if you find every variety of Indian food in Nepal street food to fast food, as they know pretty well about everything, if they can speak Indian language; they can serve you Indian food as well.

We visited many places. We wandered in the market though we had no intention to buy anything. We started to navigate the places. We met many people on the way whom we asked good places to visit and we were told many which we went. We went to Durbar Square, Basantpur. 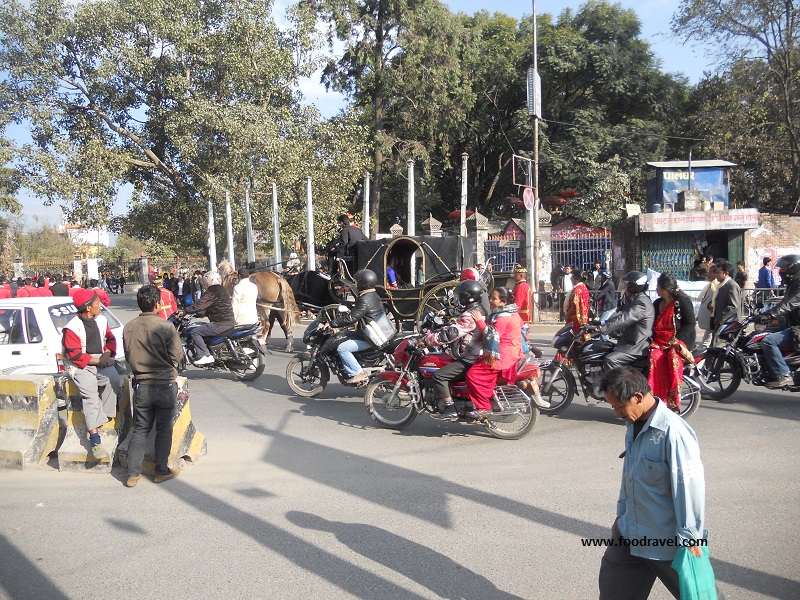 “Kathmandu Durbar Square in front of the old royal palace of the former Kathmandu Kingdom is one of three Durbar (royal palace) Squares in Kathmandu Valley in Nepal, all of which are UNESCO World Heritage sites.” (Wikipedia).

The place is really beautiful, majestic. As I am writing about this trip after around three years, so I exactly don’t remember much explanation of the places. As much as I can recollect there was a big market of handicrafts and there was a big white building, I think it might be a temple. The place is known as Hanuman Dhoka. It was all crowded place and people were busy shopping. We visited many shops just to kill time. Clothe shops, shoes shops and handloom shops. He wanted to buy a shawl for her mother. We were told by someone about a place nearby where good quality Pashmina shawls were sold. We went to the place. It was near to a Luxmi Mandir. All the shops were on the road at some platform like structures. Most of the shops were run by women. We went to a woman and had some bargain. They spoke Hindi as much as we could yet in their own tone. After some time spent dealing with those female traders, we concluded to buy the shawl at some discounted prices.  We wandered in the streets of Asan Tole Bazaar.

Then we passed through narrow streets with no information where would they end up. Fortunately even after being in a different country, we didn’t mess up in something troublesome. I also thought to buy something for every family member. Especially kids and my younger brother who was much excited. The last evening I called up my mother to tell about my well beings and she informed about my brother’s excitement. I wanted to buy a pair of shoes for him, a jacket for mom and some clothes for my niece and nephew. I bought a heavy jacket for him and a sweat for sister. I also bought a pair of cloth slipper for my mom.

Wandering around with no proper information, we reached to a place which is famous for Akash Bhairab Temple, a much crowded place at the center of Kathmandu. According to Wikipedia, “The Akash Bhairab is said to be the kirati king yalamber himself. He is believed to have gained the powers through tantric worshipping. During the famous battle of the Mahabharat, the first king of Kirat dynasty, Yalambar in disguise of Bhairab, went to the battlefield to help the losing party. When Lord Krishna heard of it, he promptly chopped Yalambar’s head, which reached Kathmandu through the sky, hence the name given as the sky god or the Akash Bhairab.”

While we were wandering at Rani Pokhar, we entered a Buddhist monastery.  The Buddhist monk told me that it was one of the oldest monasteries of the country. We saw every part of that beautiful monastery. After sometime, we sat there to have some rest. Just next to us, there were two girls; one of them was speaking something while other was recording her with camera. That girl was also speaking Spanish, which also attracted me. After their small video shoot, I approached them. I asked them to capture our pic. Dinesh had a camera. So we both stood and she captured our picture. Then, we started talking. I asked them about the video. When exchanged our introduction with each other. The one who was shooting was Shreeya Shakya and the girl who was speaking was Swechchhya Rajbhandar. She told us many things about the place and other places as well to visit. Then we came out from that place and had some snaps outside. There was a handicraft market.

We came out from that place and entered a market. It was quite busy place. Dinesh was talking with Shreeya and as Swechchhya spoke Spanish which impressed me, I was speaking with her and we both we speaking little Spanish. I gifted her Korean coin which my Korean friend gifted me. It was quite valuable gift for me still I managed to gift it to her. They told me that the next day they would have an event, something cultural where many students would participate. They invited both of us to come. I took the address and promised that we would come. Then they left us at the exit of that crowded place and went back. Then, I realized that I didn’t ask them their contacts, email or FB account. We both rushed back to them. The street was damn crowded and we were hitting people like what happens in movies. Finally I saw them and shouted from a distance. They didn’t notice. So, I shouted in a louder voice. This time I succeeded. They noticed, turned back and stopped.  We reached to them panting. We asked them about their contacts so they gave us their FB accounts so that we could stay in touch.

It started to get darker. We suddenly reminded that we were in Nepal. Well, we rushed back to the place we escaped from. Any how we remembered the place and reached there. That day ended without any discussion. People knew where we were and what we were doing. We had our dinner and went to sleep. It was really wonderful to see everyone sleeping under the same roof. I really had a mutual exchange of culture with Nepalese and Korean. All wonderful experience and much more exciting to talk with them, eat with them, sleeping in the same room. Young Jin and I used to fun with each other and used to enjoy a lot.